Illustration by ILYA. Manipulated background image based on a photo by: Ben Gamble [CC BY-SA 2.0) via Wikimedia Commons.

This use case is focused on responding to traffic incidents in the West Midlands, to support the emergency services. 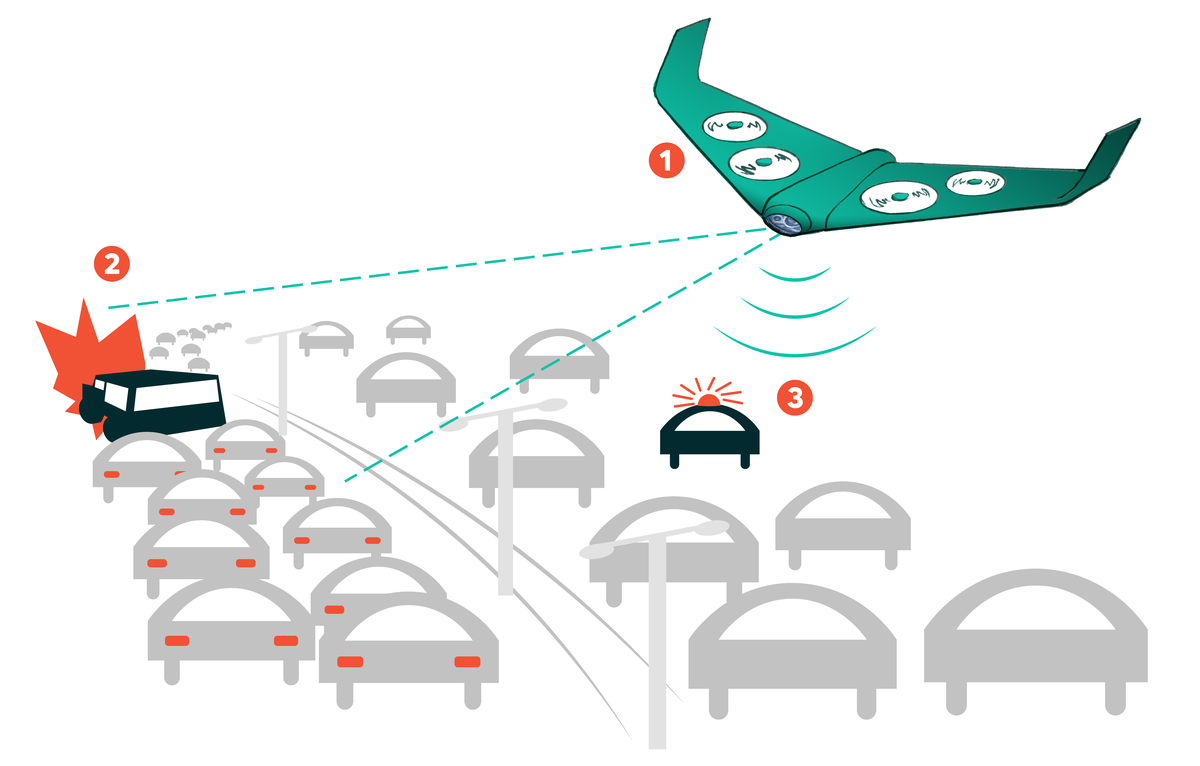 The key benefits would be:

In order to better understand the feasibility of this use case, we have focused specifically on response within a 7-mile radius of Birmingham International Airport, an area which covers several major roads including the M6, M42 and M40, parts of both the Birmingham and Coventry urban areas and rural areas in between.

We have modelled a service which would use two fast hybrid VTOL fixed-wing drones: an initial response drone with a high-powered zoom lens to get the quickest possible images of the site; followed by a drone carrying high-resolution video and Lidar.

Even the small-scale pilot outlined here would bring around £2.4m in social benefit over 12 years.

There are some technical challenges that need to be solved, primarily around safe operation and endurance. The location of Birmingham International Airport is in the middle of this zone, which also covers built-up areas. The drones would not be restricted to fixed routes, so they would need to be able to operate safely throughout the area, with as few restrictions as possible. This would require sophisticated and reliable communications networks and a sophisticated airspace management system to safely combine drone traffic and its other air users, particularly around the airport. The long duration of incidents would require good endurance.

Operating in restricted airspace around the airport and a number of other sensitive sites would require either an exemption from current rules, special permission or a change in regulation.

Our economic analysis suggests that this use case would bring significant benefits, with reductions in traffic disruption being the main contributor: even the small-scale pilot outlined here would bring around £2.4m in social benefit over 12 years.

The West Midlands use case in summary has strong social and public benefits and is feasible in principle. However, there are a number of challenges that need to be overcome in order to make this use case a reality.

The key challenges (C1-7), based on our analysis, are:

C1. The development of a drone operation system that can operate safely, securely and reliably beyond visual line of sight, while maintaining appropriate levels of privacy.

C2. The provision of suitably managed unsegregated urban airspace allowing for interaction with other airborne systems, in particular integration with air traffic from Birmingham International Airport.

C3. The development of key elements of drone and drone systems technology, particularly with respect to more automated systems that remove routine elements of human interaction, eventually moving to a fully autonomous system.

C4. Achieving a large scale service with interoperability between all emergency services and fully integrated into the processes and systems for a rapid response by the appropriate organisations.

C5. Being able to operate in low light or at night time and in adverse weather, including high winds, rain, snow and poor visibility.

C6. Achieving high endurance for long dwell-times over the scene of an incident.

A. Regulatory change to enable routine drone operations at scale, beyond visual line sight and near people, buildings or vehicles. (C1 and C2)

B. The development of a new form of airspace management to enable safe automated drone operations at scale. (C1 and C2)

D. Secure interfaces into other systems and infrastructure needs to be considered with the number of interfaces minimised and encrypted. (C1)

E. Development of technologies that can demonstrate safe operation through high levels of redundancy, including secondary and possibly tertiary systems for command and control, navigation, power and propulsion systems. (C1)

G. Development of registration and enforcement systems, with appropriate resource to ensure operator accountability. This should include a centralised database showing licensing of operator competency, the platform ID and airworthiness and the capability to provide real-time monitoring of the airspace. (C1, 2 and 3)

H. Requirement to develop tools and standards for the verification and validation of the drone components, platforms and systems, with traceability of the hardware and software supply chains. This should include development of simulation tools to ensure safe operation and validation of autonomous and machine learning systems. (C1 and C3)

I. Development of appropriate safety cases that could be published and used as standard scenarios to support the regulator and the growing UK industry. (C1 and C2)

J. Establishment of a clear, accountable ownership and sign-off of the various aspects of operation. This includes maintaining airworthiness, oversight of system upgrades, assurance of pre-flight checks, the flight, associated safety related flight data and appropriate legal accountability and insurances. (C1 and C2)

K. Integration and interoperability between airspace management systems. This will require both technology solutions as well as co-ordinated standards, legislation and process development. (C2)

L. Coordination with other aligned technology areas around common challenges. These could include collaborations with the robotics and autonomous systems and connected and autonomous vehicle communities. (C3)

M. There is an opportunity to develop technologies along with the Emergency Services Network being developed by the Home Office. (C4)

N. Development of technologies and regulatory frameworks to allow the systems to scale safely and in-line with growing market demand. (C4)

O. Development and integration of processes and standards to alert all the relevant organisations that need to respond to a major traffic incident. These processes should be able to scale to incorporate all incident types and all emergency services. (C4)

P. Development of capabilities to ensure safe flight during poor weather conditions and during low light or at night time. (C5)

Q. Development of high endurance platform technology to ensure extended coverage and support during a major incident. This should include the development of systems that seamlessly handover from one drone to another. (C6)

R. Development of tests that prove out the capability of the platform and system in representative environments. Leading to trials with growing complexity, moving from controlled environments to full public demonstrations. (C1-C6)

The full technical and economic analysis paper can be read here.