Shaping drone use in Preston

Shaping drone use in Preston

A vision for how Preston could use drone technology 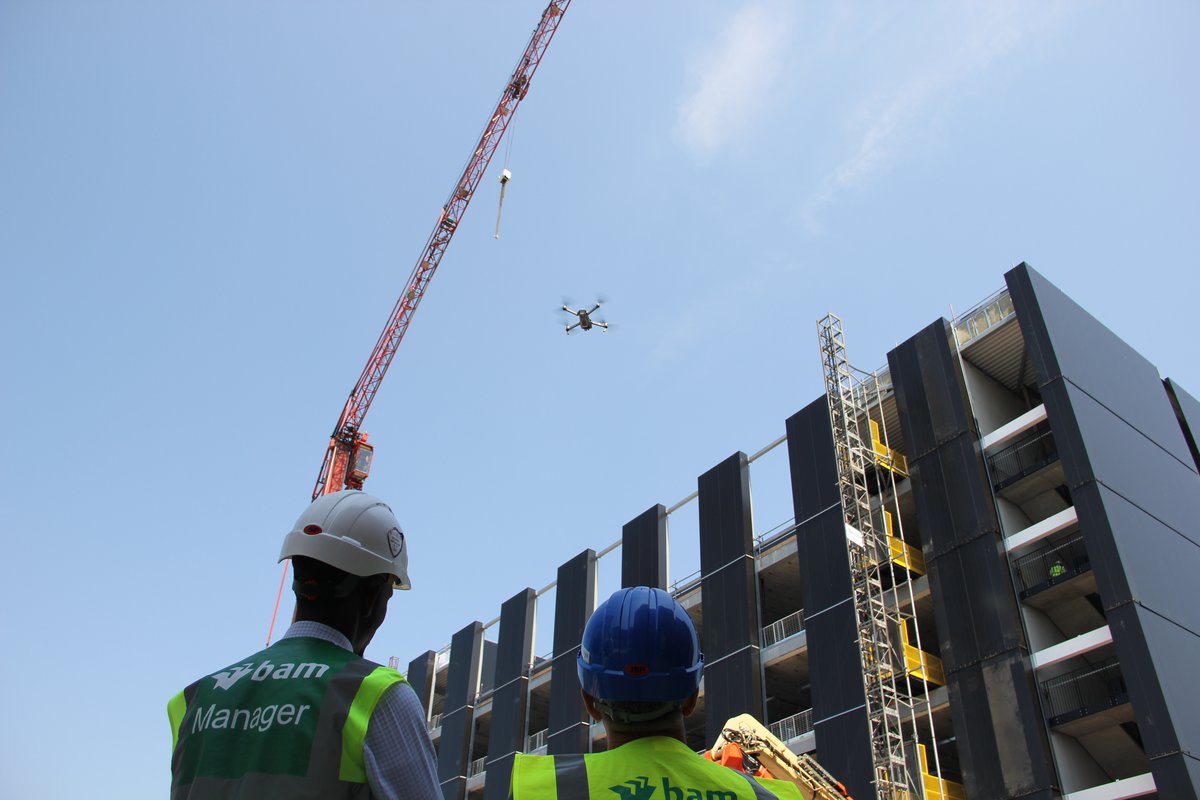 Why we are talking about drones in Preston

Preston is the heart of the UK’s aerospace industry

Situated in the county of Lancashire in North West England, the City of Preston is home to over 141,000 residents. The city’s urban environment is surrounded by a mixture of landscapes - coastal plain, river valley and moorland. Preston is a regional transport hub and the location of the main campus of the University of Central Lancashire (UCLan). It is also in the middle of one of the most significant aerospace hubs in the UK. The city itself, however, has economic challenges that have accompanied deindustrialisation, the aftermath of the financial crisis of 2007 and large cuts to local government budgets. In response to this, the council has adopted an innovative approach to local economic development that focuses on retaining wealth locally and reducing inequality by fostering local supply chains and promoting cooperative models of ownership to deliver local services.

The city can use drones to build on its strengths

Central Lancashire is the home to the largest aerospace cluster in the UK and the fourth-largest in the world (after Seattle, Toulouse and Montreal), with major multinational companies in the region including Airbus, BAE Systems, Magellan Aerospace and Rolls-Royce. This cluster contributes over £7 billion to the UK economy, employs over 12,700 people and accounts for one-quarter of UK aerospace production. The local industry includes a growing capability in unmanned aerial systems.

There is also considerable expertise in drones at the University of Central Lancashire (UCLan), which has facilities for developing and testing new drone technologies. In 2013 the Engineering Innovation Centre and Media Innovation Studio at the university set up the Civic Drone Centre to explore and promote socially beneficial uses of drones, working with both SMEs and large firms locally and outside the region. The Civic Drone Centre has investigated the use of drones for search and rescue, journalism and media and humanitarian aid, as well as hosting drone hackathons and offering training to drone operators and contributing to drone policy globally.

In addition, the UCLan Engineering Department has looked at drones for supporting the local fire and rescue service and for toxic gas monitoring. It has also developed the world’s first drone to incorporate a graphene-skinned wing. A new £32 million Engineering Innovation Centre facility in central Preston is due for completion in 2019, and will enable further expansion of the university’s drone activities. With local industry knowledge and the research centre well established, drones could play a big part in Preston attracting start-up businesses and offering a wide range of high-skilled job opportunities to encourage students to remain in the city after graduation.

The city faces challenges around skills, jobs and disused properties

Drones could be part of the solution to these local problems

Despite the challenges of a post-industrial economy, Preston grew in population and in employment in the decades up to 2008, but was hit hard by the global financial crisis where employment dropped significantly between 2008 and 2014 and there are still pockets of ingrained deprivation. An £800 million regeneration project for a new shopping centre collapsed in 2011, further increasing the number of vacant sites in need of redevelopment. Preston has relatively high employment, performing above the North West and Great Britain averages, but relies on the public sector and business service industries. Preston’s higher skilled workforce is slightly smaller than the North West and national average, so there is a need to diversify the workforce and ensure residents can access higher-paid and higher-skilled jobs. Preston is also a major transport hub for the region, but this has resulted in high levels of air pollution, presenting an environmental challenge. Emerging technologies, including drones, could help tackle some of these issues by increasing the efficiency of services and attracting inward investment and creating new high-skilled jobs.

The city is eager to explore how the use of drones can integrate into and enhance this community wealth building model. This could involve a community drone service... It also implies a policy of procuring drone services locally.

Responding to local challenges, in 2011 Preston City Council embarked on an innovative approach to economic development focusing on community wealth-building, which became known as the Preston model. The Preston model aims to build local wealth by encouraging local procurement and the development of local value chains, so more money is spent and invested locally. This includes identifying gaps in the local value chain and supporting new businesses, particularly cooperatives, to fill these. Preston City Council has led this and partnered with a series of ‘anchor institutions’ (other public sector bodies and local organisations) to redirect procurement locally. Through this approach, the city council doubled its procurement spend on Preston-based companies from 14 percent in 2012-13 to 28 percent in 2014-15. By 2016, an estimated £4 million had been directed back into the Preston economy.

The city is eager to explore how the use of drones can integrate into and enhance this community wealth building model. This could involve a community drone service, described below. It also implies a policy of procuring drone services locally. In the future, a drone delivery service could streamline local value chains, reducing delivery times and allowing for new operating models. 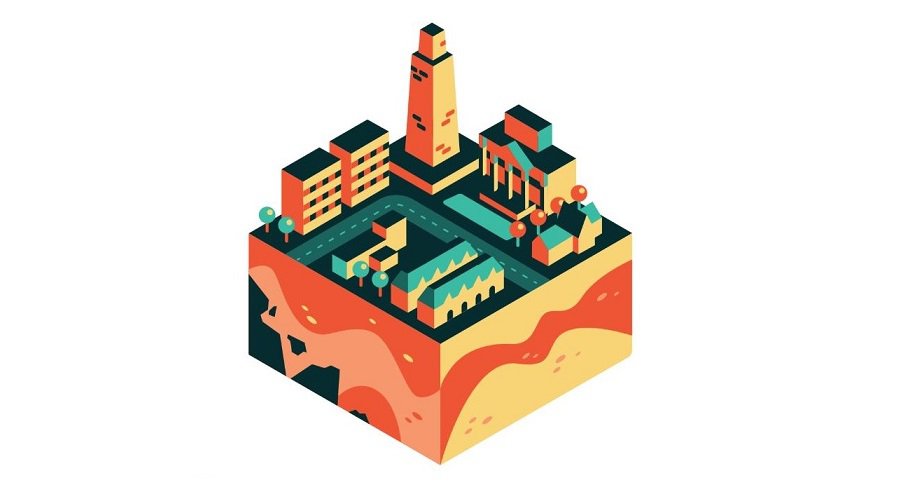 Use drones to serve the public good

A set of guiding principles, such as those recommended below, should be developed as a foundation for any future public decision-making or policy development governing drone use in Preston.

Drone development in Preston should grow and retain wealthy locally, be mindful of noise and air pollution, and proactively engage the public throughout

What could drones do in Preston? 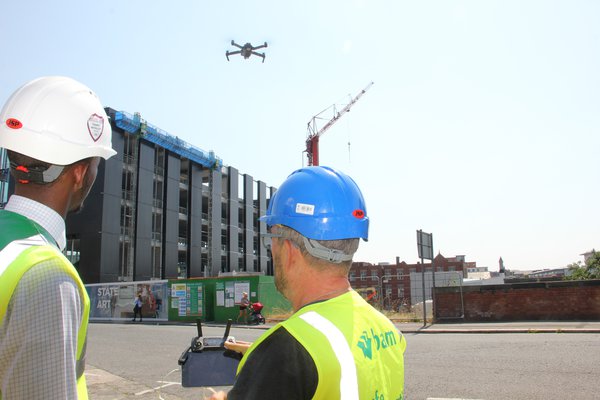 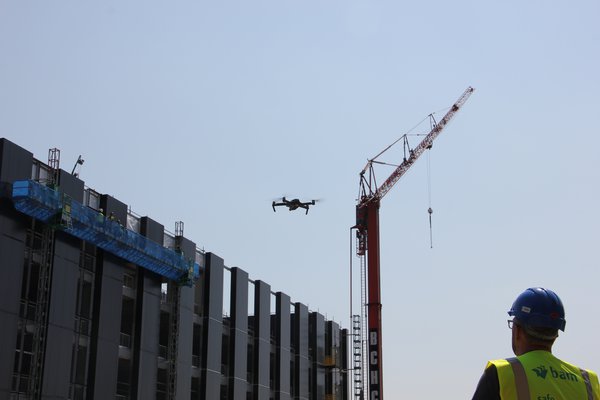 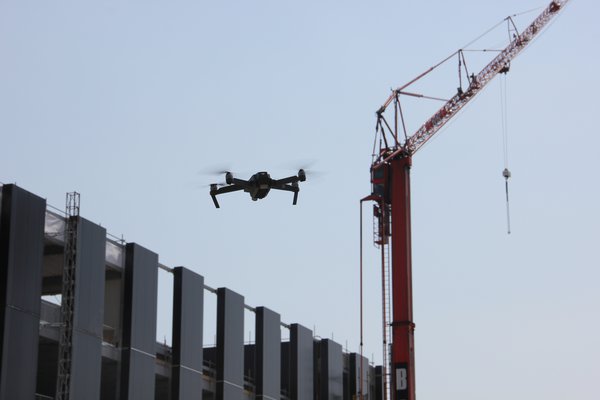 Through the Flying High project, Preston engaged a wide range of stakeholders to explore the most useful activities drones could perform for the city, in line with broader city goals. The below section describes those uses with the most resonance for Preston.

Aid in regeneration and housing development in the city

There is major regeneration work underway in Preston. There are 1,142 long-term empty properties in the city, particularly in the centre. The Lancashire Core Strategy has outlined the need for 507 new homes to be built in Preston every year to 2026. A £434 million of investment has been agreed as part of the Preston, South Ribble and Lancashire City Deal which is funding new construction and development projects. Drones can be usefully applied to support regeneration and construction in a number of ways, particularly through mapping and aerial surveying; the Flying High use case analysis offers further details on large scale activities such as the Preston Western Distributor road project that drones could support. Drones could identify areas for development, monitor the progress of construction projects and show the changing land use over time. They can also assist in the management of properties, including council assets, such as mapping energy use and identifying structural or other health and safety issues.

Innovative arts and culture offer a tool to promote the region

Preston aims to be a major cultural hub and destination in the North West and would like to explore new and creative ways to use digital technology in arts and media, including drones. Local cultural assets include the Media Innovation Studio at UCLan, which has original and innovative projects around journalism, communication and digital technology, and is a partner in the Civic Drone Centre. The city is home to the Harris Museum and Art Gallery, which has a Makerspace that encourages new and innovative ways to showcase art, and the city has several outstanding live venues including the Preston Guild Hall and Charter Theatre. Drones could be used to create artworks, through aerial displays, being used as mobile projects or equipped with spray paint to create digitally-designed murals. Aerial platforms could help capture video and photography of arts events, enabling new views of art installations. Innovative uses of drones could help promote the region and be integrated directly with tourism services.

Improving sustainability and contributing to the battle against climate change is an important part of Preston’s future vision, as outlined in the Preston Local Plan. Drones fitted with thermal cameras can be used to understand the energy efficiency and insulation of particular buildings, identifying areas that are using more energy than needed. The Civic Drone Centre is already looking at how drones can be used to monitor for harmful and toxic gases, and this is something that could be useful for environmental protection. Drones could integrate into a raft of environmental measures, including river sampling and identifying illegal dumping.

In line with the localist and inclusive principles that underlie the Preston Model, the city could pioneer alternative and community-minded business models for drone use. The city is interested in a Preston-wide community drone service, whereby drones would be available for use by the community where there is a public benefit. This could be run by the Civic Drone Centre or a new organisation, which could be a cooperative or not-for-profit charity. Public sector services could benefit from being an end user of this service as and when required for instance when police or fire services monitor events or emergency situations or the local authority survey a construction site for health and safety assessment.

Based on Preston’s larger civic goals and the viability of the prioritised drone activities, Preston could explore developing demonstration and testbed facilities for drone technology around the Preston Western Distributor and development of a new crossing over the River Ribble, which has been proposed to improve links between Preston and South Ribble.

First, plans have been approved for a major new road - the Preston Western Distributor - linking Preston and southern Fylde to the M55 motorway. The Preston Western Distributor and associated link roads will support planned housing in North West Preston, improve access to the new enterprise zone in Warton, and provide an option to avoid peak hour congestion in the city centre. Second, Lancashire County Council is seeking funding to create a new crossing over the River Ribble to allow direct access to the western side of the city from Penwortham. In keeping with Preston’s goals around developing drone services to support city development efforts, potential trials of drone usage around these sites could be further explored.

Recommended next steps for Preston

Over the coming year, Preston should identify and assemble resources to further investigate and address the opportunities highlighted in this vision, using the following outline of near-term actions as a roadmap: