The Flying High project report you are reading outlines the key findings of a unique project led by the innovation foundation Nesta, with support from the Centre for Public Impact, WPI Economics, research consultancy Science Practice, PwC, Glass, five UK cities and a number of research associates. The objective: to explore with cities if and how drones could operate in urban environments.The programme was structured around several observations:

To this end, this phase of the Flying High project featured a number of workstreams:

The Flying High project aimed to assess the feasibility of future applications for drones through engagement with cities. Cities are the locations in which many of the most complex and challenging use cases will be located, they are the authors of local economic strategies, the problem owners of many of the issues that drones can be used to address and, in addition, have unique legitimacy through their democratic structures.

Through engagement with cities, our research aimed for breadth: different geographies, different perspectives and different priorities.

Between December 2017 and January 2018, we invited UK cities to apply to the project. All applied as consortia led by local authorities, but with varying degrees of participation by other public sector institutions (such as emergency services and public health bodies as well as businesses, universities and other organisations). In total, 20 cities applied.

An expert panel including key national stakeholders such as the Civil Aviation Authority and the Department for Transport was convened by Nesta. The panel selected the final five cities, based on quality of applications (including the contribution the cities proposed to make to the research), diversity of city size/type and geographical spread.

The primary purpose of city engagement was to understand and develop city-led ‘visions’ for the future of drones; how drones could be used to further the diverse strategic aims of these five cities.

The secondary purpose was to inform technical, economic and social feasibility studies conducted on one specific use case for each city. Early in the process Nesta consulted with each of the cities to identify what this one key use case could be, and to explore each in greater depth. These consultations informed the detailed technical and economic feasibility chapters of this report, which outline how such use cases could operate at scale, and how specific instances of them (that could inform pilot projects) .

Cities engaged with the Flying High project by allocating staff time to the project. Each of the five city and technical leads worked closely with Nesta throughout the programme by gathering information and introducing relevant stakeholders to support the development of the report. They acted as a vital conduit between the Flying High project team and key stakeholders in the city. Using their local knowledge, each city lead brought together a local task force that was best suited to work with the city during the project.

Task forces included local authority officers, public sector representatives, researchers, community organisations and local drone industry professionals. Each task force held meetings at least every month, where they decided on possible use cases for the technical feasibility study and contributed towards the development of the city’s vision.

To expand participation in the project, each city hosted a workshop facilitated by Nesta, inviting a wide range of stakeholders to debate the possible roles of drones in their city and to help shape the city’s vision.

Nesta also encouraged shared learning amongst the five participating cities and set up a number of online platforms for sharing documents and news, as well as the opportunity to discuss relevant issues and share knowledge. The five cities were brought together for an away day part-way through the project, held at the University of Southampton. Here they shared experiences and lessons learned during this phase of the programme, and were given a presentation on existing and future drone regulation by the Civil Aviation Authority.

Some cities additionally arranged for drone demonstrations to be held and surveys conducted with their residents. This data informed the development of the city’s vision.

If city engagement provided the Flying High project with breadth, the technical feasibility studies provided depth. These studies examined in greater detail the five priority use cases identified in partnership with each of the five cities. They asked: what would this type of service look like and what would its benefits be? How would a very specific instance of that use case operate? What would it require? What challenges need to be overcome? The objective was for these studies to be able to inform the design of pilot programmes that reflect the key features of operation in the real world, and at scale.

The use cases were selected in order to respond to genuine needs in each of the cities, and to achieve a spread of different types of service (public vs private), drone (such as high endurance requirement vs low, different weights of payload, etc.), mission (logistics vs observation), and with applications in different sectors of the economy. They also aimed to look at operational parameters that pushed current technical and regulatory boundaries and could provide a focus for further R&D, rather than just looking at what is currently possible.

The technical feasibility studies were primarily informed by engagement with technical experts and city stakeholders through interviews and workshops, augmented by desk-based research. The outlines of the five use cases published in this report highlight the key features and technical parameters we learned through this process, and give an indication of the technological developments needed in order to deliver each of these five services.

Our economic team investigated the viability of the five use cases

The economic and social feasibility studies aimed to assess the commercial and social viability of each use case (given certain operational assumptions). These helped to answer the question: assuming this use case is technically feasible, is there a solid economic rationale for it, taking into account the broader social impact?

The economic assessment identified the parameters that affect the costs and benefits associated with the selected use cases over a 10 year period. For each use case, drivers of economic impact were identified, alongside mechanisms to quantify these drivers. Social benefits, such as public health impacts or network efficiency gains, were also priced into the model.

The use cases published in this report summarise the findings of this economic modelling. 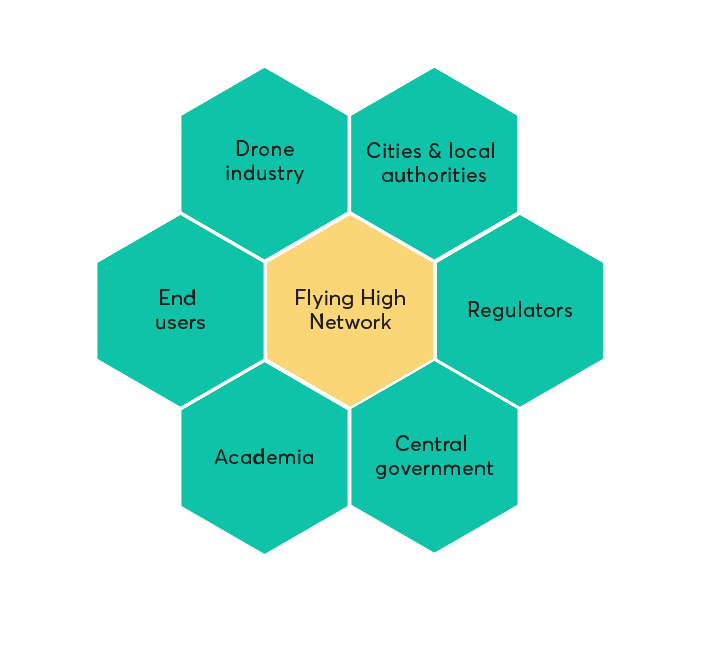 We built a network of key organisations with an interest and stake in the future of drone applications. This network was regularly called upon to discuss emerging findings of the project and to build their capacity to work together on each use case.

We looked into the current UK drone industry landscape

The opportunities for the UK drone sector are not just a function of the demand for (as evidenced through city engagement) or feasibility of (evidenced through the technical and economic feasibility research) drones in the UK. They also depend on an understanding of the landscape of UK industry and research in the sector.

We worked with AI start up Glass, PwC and Nesta’s innovation mapping team to map the UK drone sector and better understand where the strengths and weaknesses of British industry and research are, and where some of the key opportunities arise.

Glass have developed tools using artificial intelligence to interpret text to identify companies working in a given sector. They scanned the web to identify companies working in the drone industry that had a UK address on their site, or that had a .co.uk domain name. This generated a list that was supplemented with data from Gateway to Research on UK recipients of UK and European government funding for drone projects. PwC worked with us to categorise these players according to if they were a technology developer, drone-powered service provider (e.g. using drones for surveying or agriculture inspection), provider of services to the drone industry (such as insurance, training, or maintenance), an academic institution or ‘other’.

The Nesta innovation mapping team then created an interactive map to display this data, allowing users to explore the UK drone industry. This tool provides an excellent overview of the UK drone industry, with the caveat that drone service providers are undercounted (as many of these are sole traders or do not have .co.uk address or a UK address on their webpage).

One car only needs a road, but managing heavy traffic in cities requires physical and systemic adjustments: the highway code, traffic lights, lanes, speed limits, driving tests and so on.

If they are to operate at significant scale in complex urban environments, drones will need something similar; a skyway code to complement the highway code.

Our research into systems requirements extrapolates findings from the technical and economic feasibility studies, understood through the lens of the findings from the cities, to paint a picture of some of the requirements and challenges associated with integrating drones into city ecosystems in the medium- to long-term.

To understand the likelihood of achieving the objective of future phases of the Flying High project, we have used the Centre for Public Impact’s (CPI) framework, the Public Impact Fundamentals. The three fundamentals (legitimacy, policy and action) provide a structured, evidence-based approach to assess and understand what can be done to maximise the chances of a policy or initiative achieving public impact.

The framework was developed with the support of leading practitioners and senior academics around the world and has been tested against more than 300 cases internationally. In developing the framework, CPI sought to develop a framework underpinned by cutting-edge thinking from academia and tested by government officials so that it can be immediately usable.

Each of the Fundamentals has three elements that collectively contribute to its performance:

To diagnose the likelihood of a policy or initiative achieving its intended outcomes, each element is assessed using a four-point scale (weak, fair, good or strong).

A diagnosis always reflects an assessment at a certain point in time and can be used to look back at the moment of initiative design, understand its current status and/or evaluate future developments.

It is important to note that elements can mutually reinforce or be in tension with each other. Focusing on improving one element, for instance stakeholder engagement, might have knock-on effects on other elements.

Previous section: What we have found Next section: Glossary