The first report from our Exposure to Innovation programme

Juliet is a Researcher working on a joint project between the Inclusive Innovation and Education teams.

Executive summary Introduction Why improving diversity in innovation means starting young What can we do to unleash inventive potential? Scale, spread and impact Understanding what works in promoting exposure to innovation Learning from what doesn't work Recommendations Acknowledgements Appendix
Share this

Are we doing enough to help young people become inventors? Our analysis suggests the UK is under-investing in this area. Moreover, the investment we are making is unevenly spread across the country, and skewed towards schools with less deprived pupil populations.

How many children do ‘invention schemes’ reach?

We attempted to find out how many children participate in the 29 schemes we identified as having a strong focus on invention. Twenty of these published data about their participant numbers online, or responded to our requests for information. We asked schemes for data on their most recent full year of activity. We estimated the reach of the remaining ten schemes.[25]

In total, we estimate that these 29 schemes reach around 145,000 children per year. The scale of these schemes ranges from 60 pupils per year to 37,000, with the majority operating at the smaller end of this scale. Only six schemes reach 10,000 or more per year.

Given that there are 10.2 million pupils in UK primary and secondary schools, these schemes between them reach less than 1.5% of the pupil population.

If we assume every child has an equal chance of taking part in one of these schemes, then over a 13-year school career, each pupil in the UK has roughly a 1 in 5 chance of taking part in an ‘invention’ scheme.[26] However, this is a generous estimate - we know that provision is not evenly spread across the country, and that some children will have multiple opportunities to take part while others have none. At a minimum, we would need around five times the current level of provision for children to have even one ‘hands-on’ invention experience during their 13 years at school.

We do not yet know how much exposure to innovation is needed to make a difference to children’s chances of becoming an inventor. But based on these estimates, it seems unlikely that we are offering children in the UK sufficient opportunities to experience innovation in practice.

How is provision spread across the UK?

Among the 29 invention schemes we identified, 13 have national reach and a further four are international. Of the remainder, most are based in London or the south east of England.

We wanted to find out more about how opportunities to take part in these schemes are spread across the UK. We were able to collect data from 17 schemes on the spread of their participants across the UK.[27] Between them, these schemes account for 91% of the estimated 145,000 pupils reached per year.

Within England, our data suggests that pupils in the South (including London) are twice as likely to have opportunities to take part in an invention scheme as those in the Midlands, and 1.6 times as likely as those in the North.

How far do these schemes reach disadvantaged pupils?

To get more insight into who these schemes are reaching, we compiled a dataset of schools in England participating in innovation schemes. Two schemes - Faraday Challenge Days and Leaders Award - shared a complete list of participating schools for 2017/18. Alongside this, we compiled a list of schools that had reached the finals of recent invention competitions. After removing duplicates, our database contained 519 schools, 102 of which had been finalists in at least one competition.

We added data on school type. This showed that 91% are state-funded, while 9% are independent. This is roughly in line with the status of schools across England (nationally, 10% are independent). However, if we focus just on ‘finalist’ schools, then independent schools appear over-represented - they account for 20 out of 102 finalists, or 20%.

Base: 519 schools taking part in invention schemes, including 102 schools shortlisted for the finals of invention competitions.

For the state primary and secondary schools in the sample, we then added data from Department for Education on the proportion of students in each school eligible for the Deprivation Pupil Premium. This is additional funding that schools receive to support students from disadvantaged backgrounds.[28]

To explore what types of pupil populations these schemes are reaching, we first divided our sample of schools that take part in invention schemes into two groups based on whether they had below, or above, the national median average proportion of students eligible for Pupil Premium. 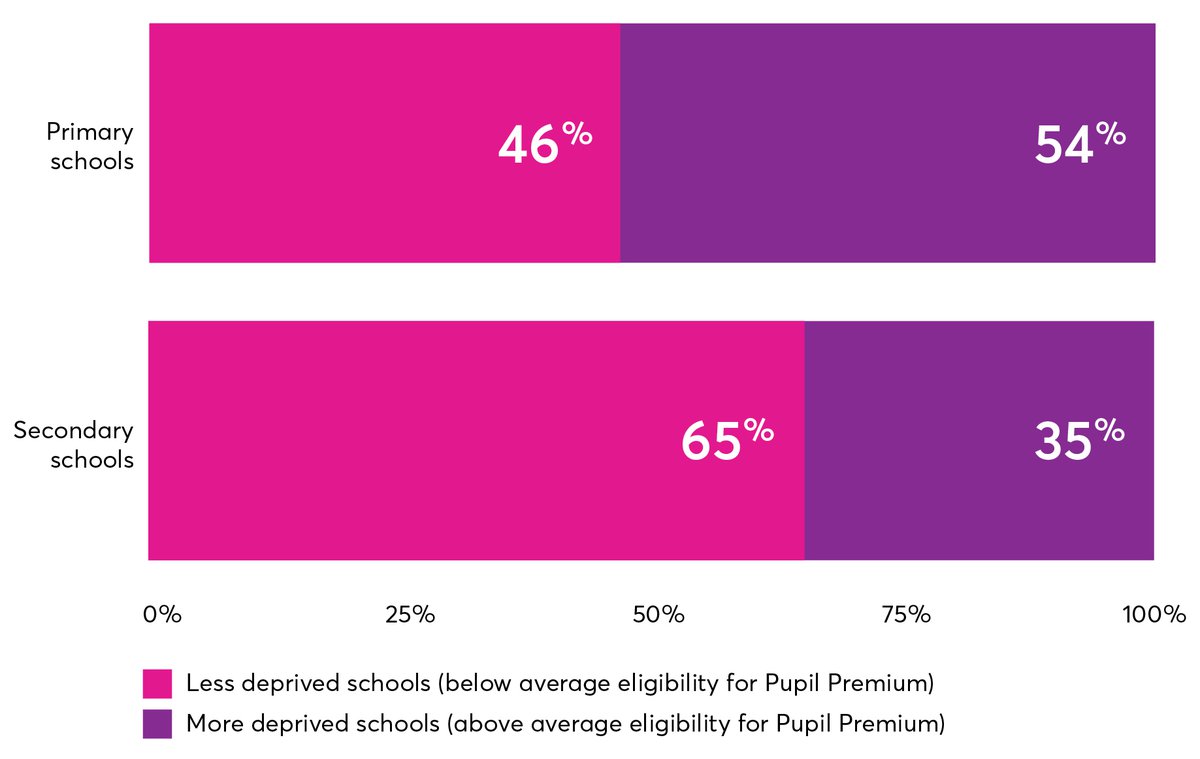 To explore these patterns in more detail, we did a similar exercise, this time dividing state schools nationally into five equal groups (quintiles) based on the proportion of students eligible for Pupil Premium. We then looked at which quintiles our participating schools fell into. If schools were taking part in invention schemes at the same rate regardless of their Pupil Premium numbers, we would expect 20% to fall in each quintile. 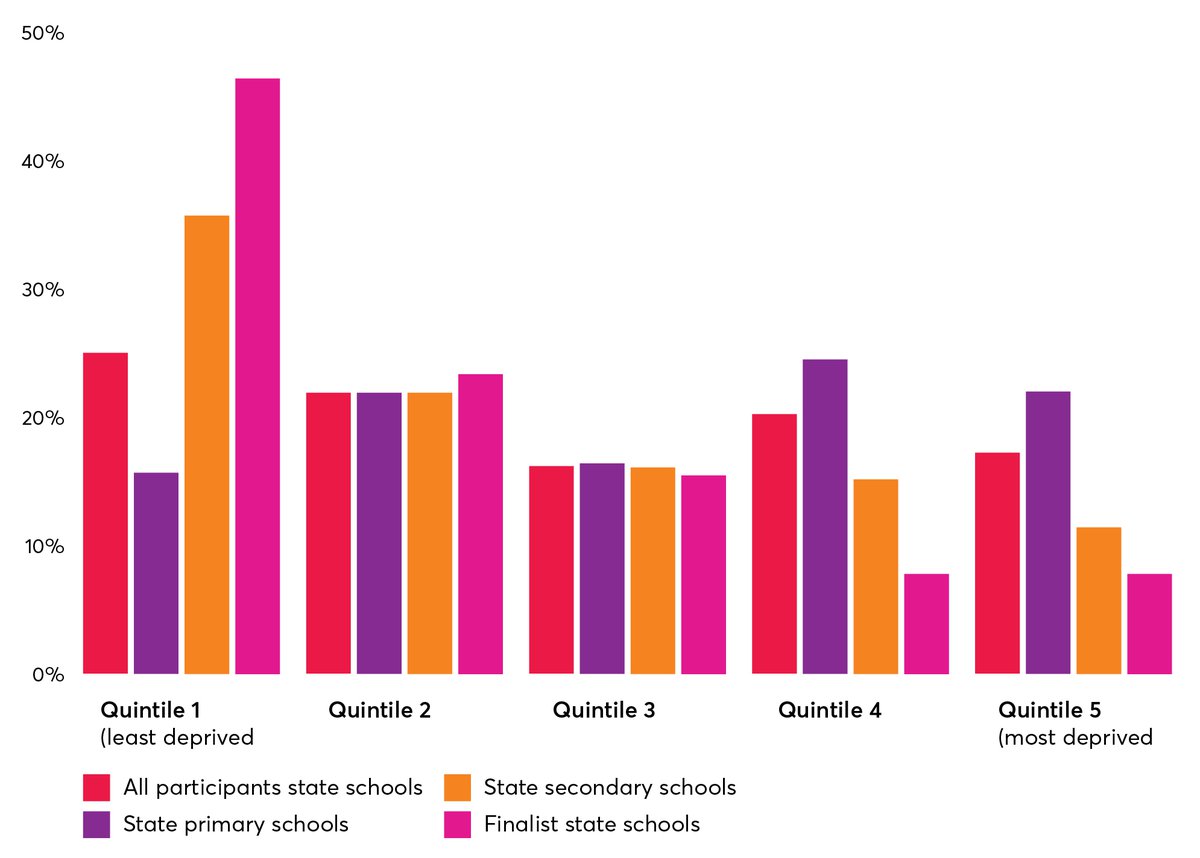 Teams of pupils who make it to the finals of invention competitions usually have additional opportunities over others who enter these competitions - they get to meet inventors and innovators, and of course, they get recognition for their work. So not only are schools with better-off pupil populations more likely to take part in invention schemes, they are much more likely to reap the fullest benefits of doing so.

If we want to unleash ‘lost’ inventive talent, then we need to reach groups of pupils who are under-represented amongst inventors. We would want a strong skew in favour of more deprived schools, rather than the other way around.

[25] To estimate the size of schemes where data was missing, we excluded the six ‘outlier’ schemes that reach 10,000 or more pupils per year and then used the average from the remaining 14 schemes, which reached between 60 and 5,500 children each.

[26] For this calculation we also assume that if a child has taken part in a scheme one year, they will not take part in another. In reality, this is unlikely - for example, we observe the same schools taking part in different schemes.

[27] One scheme, the Engineering Development Trust’s First Edition Days, reached 25,000 pupils in 2017 according to its most recent published impact report. This report specifies that 1200 of these were in Scotland, and reports none in Wales or Northern Ireland. We were not able to get further data from EDT on the spread of their participants across England, so for the purposes of our calculations, we assumed that they are spread in proportion with the pupil population. Some schemes were able to provide data on the spread of schools, but not pupils; in these cases, we assumed that equal numbers of pupils took part in the scheme from each school.

[28] Pupil Premium is additional funding given to schools in England to raise the attainment of disadvantaged pupils since 2011. It is allocated to: children who have been eligible for free school meals at any point in the last six years (the ‘Deprivation Pupil Premium’); children who are, or have been, looked after by the local authority; and children whose parents are currently serving in the armed forces.

Previous section: What can we do to unleash inventive potential? Next section: Understanding what works in promoting exposure to innovation

Juliet is a Researcher working on a joint project between the Inclusive Innovation and Education teams. 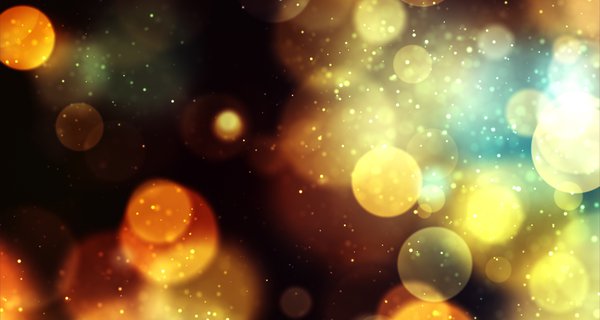 Shifting the dial on diversity in innovation

On 5 November 2018, we held an event to discuss how we can support young people from diverse backgrounds to become innovators. Here are some of the highlights. 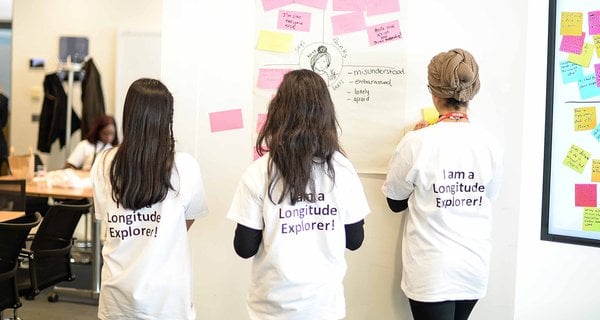