New research from Nesta, in partnership with the Creative Industries Council, reveals creative industries across the UK are driving local and national economic growth, identifying that local economies have grown their creative industries employment by an average of 11 per cent, twice as fast as other sectors.

Nesta has mapped (3) the scale of the creative industries across the UK and found that the UK is experiencing a boom in creative entrepreneurship - with the number of businesses growing in nine out of 10 places mapped. Creative industries -- from architecture to film and advertising -- also grew faster than other sectors in four out of five (83 per cent) areas.

This fast growth partly reflects digital technologies which allow creative businesses to create content that can be easily exported worldwide, and demand for creative services from advertising to software and design in other sectors. In the future, creative jobs are likely to gain importance because they are harder to automate(1).

An example of a creative business includes Engine House Animation in Cornwall, a small yet fast growth VFX agency and animation company. 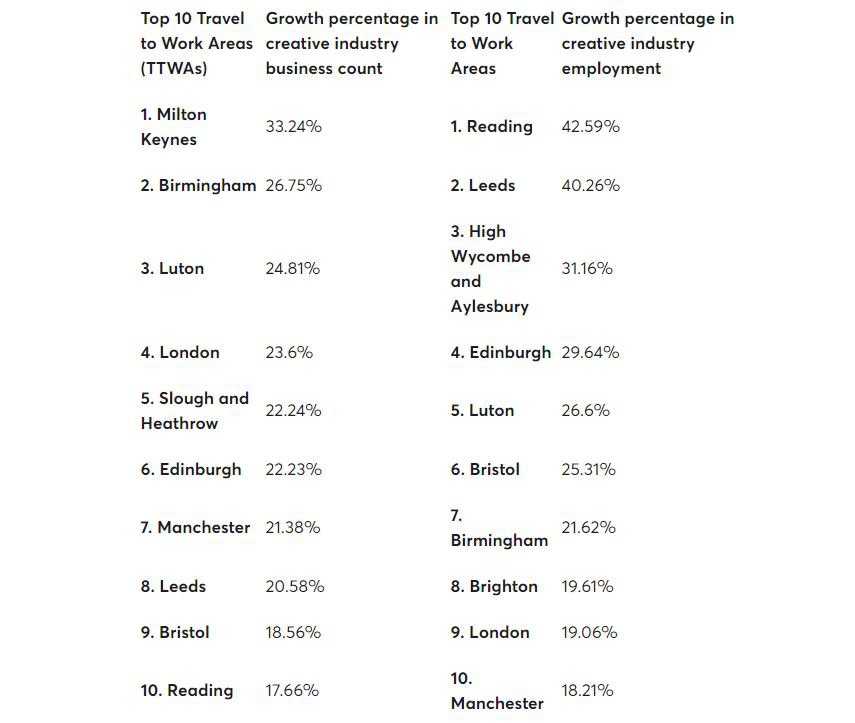 “The creative industries are one of our strongest cultural calling cards, with British artists accounting for one in every eight album sales around the world, millions of tourists visiting Britain to see our world-leading art and design and UK-produced films regularly topping international box offices. This report confirms that we have creative talent spread right across the country and shows the sector is growing twice as fast as other industries outside of the capital. The government will do all we can, through our Industrial Strategy, to help our creative industries keep up this momentum."

“Nesta’s research confirms that high entrepreneurship rates are boosting growth in creative industries like software and advertising right across the UK, not just in London and the South East.

“However, it also shows that if cities can increase the number of higher growth, scale-up creative businesses, the creative industries could make a dent in the UK’s productivity problem too.

“Providing the climate for such businesses to grow should be a top priority for local economic policymakers.”

“British creativity is world-renowned across a plethora of disciplines – from TV and film to media and advertising, from gaming and visual effects to music and art. What makes British creative industries unique is the diversity of the people that make it. And indeed, it’s thrilling to see that towns like Milton Keynes, Birmingham, Luton and Manchester are driving growth, entrepreneurship and innovation across the UK. These creative powerhouses are creating new jobs weekly and help paving the way to reach one million new creative jobs by 2030.”

Creative Nation is the latest in data vis from Nesta in mapping the creative economy, following The Clubbing Map, The Museums Map, The Geography of Creativity in the UK, A Map of the UK Games Industry and Interactive data visualisations of the UK’s creative economy.

For media enquiries, case studies and interviews please contact Anna Zabow in Nesta’s press office on on 020 7438 2697 or [email protected]

Nesta is a global innovation foundation. We back new ideas to tackle the big challenges of our time, making use of our knowledge, networks, funding and skills.  We work in partnership with others, including governments, businesses and charities.  We are a UK charity that works all over the world, supported by a financial endowment.  To find out more visit www.nesta.org.uk