We explore why truly transformational social change is achieved by those who challenge and disrupt dominant paradigms and look at a number of Nesta's programmes which are doing just this.
04 December 2018
In Government innovation
5 min read 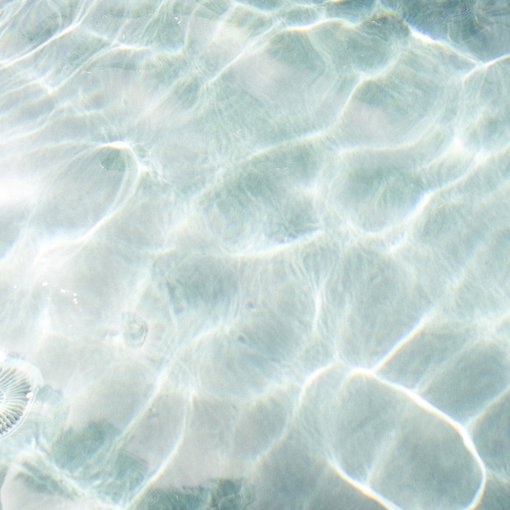 Anna and Rob live in a rental property in Manchester. They have two children - aged 8 and 10 - who attend a local school five days a week. Both Anna and Rob went to university and have full-time office jobs. With the money that they earn, they pay their taxes and use what’s left to pay their bills and live their lives. They are saving to buy a house.

This is hardly an interesting story. It feels familiar, predictable and mundane. So why are we telling it?

We’re telling it because it actually tells us more about our society than it may first appear. And that’s because this whole story - and our lives - are underpinned by a set of paradigms which we rarely, if ever, think about, question or challenge.

"The shared idea in the minds of society, the great big unstated assumptions — unstated because unnecessary to state; everyone already knows them — constitute that society’s paradigm, or deepest set of beliefs about how the world works."

One of the paradigms that hides within this story is that of property ownership - the idea that the earth is something that can be packaged up, built on and sold to individuals. Yet another is that families live together in small units.

There are many paradigms in this scenario - and beyond - which shape our world in ways that are so 'natural’ to us that it rarely occurs to us to interrogate them. See, as another example, Marcus Coates' artwork below and see if you can solve the puzzle.

We believe that it is important for anyone who wants to make the world better to challenge and - where appropriate - disrupt dominant paradigms to drive truly transformational change. In this post, we explore how some of Nesta’s programmes are doing just that.

What does it take to shift a paradigm?

The term “paradigm shift” was coined by Thomas Kuhn in his influential work, The Structure of Scientific Revolutions (1962). Kuhn’s book focuses on paradigm shifts in science - for example, the shift from Newtonian physics (which held time and space to be the same everywhere, for all observers) to Einsteinian physics (which holds time and space to be relative to the observer’s frame of reference).

Kuhn’s work has since been extensively used in the social sciences. For example, Peter Hall uses Kuhn's concept of paradigm shift to explore the transition from a Keynsian economic paradigm to a monetarist paradigm.

Paradigm shift, according to both Kuhn and Hall, happens when: the anomalies and shortcomings of the current paradigm are repeatedly pointed out; proponents of the new paradigm speak loudly and with assurance about it and are placed into positions of visibility and power; and energy is focused on converting those people who are likely to be open-minded to the change.

While Kuhn and Hall focus on the sudden and dramatic shift in paradigm - in one paradigm replacing another - in this article we are interested in exploring the more subtle reshaping of paradigms through projects and programmes which reimagine what’s possible and encourage change over time, rather than pushing for a complete collapse of the paradigm.

The first paradigm we are working to shift is the idea that citizens are passive recipients of government services and have no role to play in solving social challenges. Our work to promote people powered public services challenges this view and champions an alternative perspective, which recognises that many members of the community have unique assets which governments can and should harness to support them in the delivery of services. Working with our partners in UK Government, Nesta’s People Powered Public Services team is directing £22 million towards growing new models of public services which are delivered in partnership with citizens. Examples include using volunteer tutors alongside teachers at schools in order to improve the education attainment of disadvantaged students, and using trained members of the community to act as emergency responders alongside ambulances.

We are also challenging the idea that the only way that governments can operate is through models of top-down direct service delivery. Our New Operating Models project is exploring alternatives to traditional models of delivering public services and aims to provoke people to reimagine the role of local authorities. For instance, could governments assume the role of a matchmaker - connecting and leveraging existing resources in the community - rather than delivering services directly? A great example of this kind of model is Trust on Tap - a platform model which connects carers to those requiring care in the home. 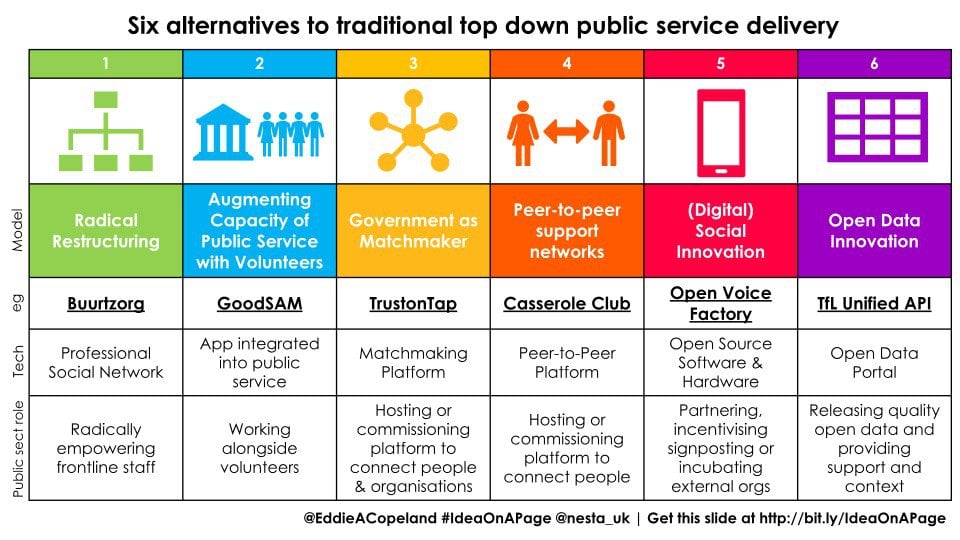 A third programme is Nesta’s Sharelab Fund, which seeks to reshape the paradigm of the sharing economy.

Initially the sharing economy promised better utilisation of existing resources, limiting the need to produce more and so was a window into a greener, more sustainable and altruistic world. But... we live in a capitalist paradigm and the platforms initially billed as for sharing have turned into marketplaces on speed. Those who have resources can list them and get a higher return on what they own, which encourages others to buy things specifically so they can list them for rent.

How do we go about reclaiming the paradigm of the sharing economy from the grips of the Big Tech platforms to reaffirm its earlier more socially minded promise?

Sharelab’s mission is exactly this. We are providing funding to digital collaborative platforms which are true to the original intention of the sharing economy - matching people who need something to people who have something. Examples of Sharelab grant winners include: Hearts Milk Bank - an app to automate the collection of donated breastmilk from donor mothers; Chatterbox - a language tutoring platform powered by refugees; and Equal Care Coop - a platform cooperative which matches people looking for support at home with employed worker members. 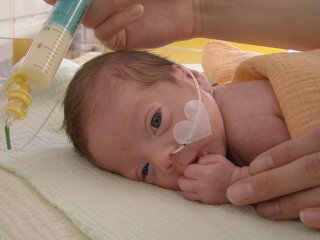 Working with our Sharelab grant winners is providing an opportunity to test our hypotheses that digital platforms can - despite the dominant capitalist paradigm - have a positive social impact.

A final interesting example which is challenging dominant paradigms beyond the walls of Nesta is the work of Preston City Council, who have rejected the prevailing narrative of austerity and have instead pursued a programme of Community Wealth Building. This centres on the idea that wealth can be built by leveraging the assets that already exist within a community, rather than relying on external investment. You can learn more about this model in the video below.

“That is to keep oneself unattached in the arena of paradigms, to stay flexible, to realize that NO paradigm is “true,” that every one, including the one that sweetly shapes your own worldview, is a tremendously limited understanding of an immense and amazing universe that is far beyond human comprehension.”

While this level of critical reflection can be difficult, it is necessary to support truly creative thinking. Constantly challenging yourself to remember that nothing is true is uncomfortable but - at the same time - tremendously liberating and powerful.

We’d love to hear about work that you’re doing which challenges dominant paradigms - comment below, or reach out via twitter (@theasnow @jennilloyd).