What I experienced at the world’s largest festival of art, technology and society
29 October 2018
In Futurescoping Creative economy & culture
5 min read 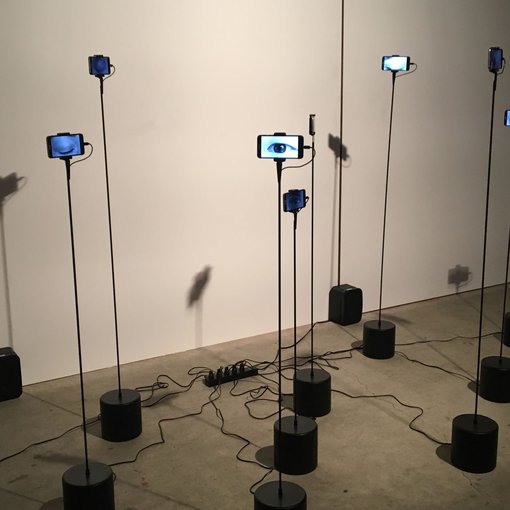 Last month, I travelled to Linz to experience the world’s largest festival of art, technology and society, Ars Electronica. The theme this year was ‘error: the art of imperfection’ - suitably bashful in the year of Cambridge Analytica, election hacking, and backlash about tech workers’ rights, when anything too tech-positivist or less realistic about the nature of technological progress might have rung rather hollow.

It was a whirlwind tour through a vast number of installations, exhibitions, workshops, lectures and demos, but here are some takeaways.

The convergence of different practices

The projects at the festival continued Ars Electronica’s tradition of showcasing work which either crosses existing disciplines or forges new ones: examples include the Bitsoil campaign for ‘an alternative taxation system for a fairer digital economy’; ‘harvesting kit’ Future Flora which women can use to grow living cultures for vaginal health, or Poppy, an interactive documentary resulting from a 20-year investigation unearthing the trail of Afghan heroin and how it funds global conflict. Studios and individuals whose practices combine such diverse disciplines as investigative journalism, creative coding, product design, digital storytelling and more illustrate the challenge of categorising this kind of work, and reflect how digital and scientific technologies make these hybrid projects increasingly possible. They also raise the question of what kinds of skills individuals need to make a contribution in the increasingly important spaces where domains combine. In the year that the favourite to win Britain’s most famous art prize is a collective comprising everything from lawyers to archaelogists, are we approaching this laterally enough? It is common to single out technological proficiency as a highly valuable skill for artists and designers - but maybe the most important one to develop is collaboration.

The future of new media and digital art

At a panel hosted by Kickstarter on ‘Experimental Monetization’ chaired by curator Lindsay Howard, the conversation focused as much on how to create a market for digital and new media art, as on how to fund the projects in the first place. Estela Oliva deliberated on the challenge of how and where to view digital art editions once they’ve been added to a collection, while Christoph Nagel suggested that crowd-funded art projects promote ‘brutally honest’ relationships between artist and public. He also introduced Drip, Kickstarter’s subscription-based patronage model which will encourage the public to make regular donations to their chosen artists in return for exclusive access to virtual studio visits and behind-the-scenes insights into their practice. Many artists and creatives have a research- or process-based practice, so this is a welcome platform for supporting them. However, not all will want to open up their working spaces to the public, and of course it continues to be the case that only some kinds of work will have the right kind of appeal to attract public (financial) support in this way. Nevertheless, the panel raised important questions about the new directions in which art funding is evolving - whether that’s transposing traditional art market models to new media art (like collecting digital editions), or experimenting with something new altogether.

I joined a workshop led by FutureEverything on Trust in Invisible Agents, in which we crowd-sourced a manifesto for ‘Art in the IoT’ (Internet of Things). The starting point was a consensus on trust (or rather lack of it) being the biggest barrier to innovation in the IoT field - whether concerns over lack of privacy, or over having decisions automated without any transparency of process. Art’s ability to provoke, to reveal the hidden, to imagine alternatives were all discussed as valuable interventions into the development and adoption of IoT. Unsurprisingly, many events and projects around the festival addressed this issue of trust and transparency. One thought-provoking work, Mary Flanagan’s help me know the truth, asked visitors to rate mugshots according to labels such as ‘victim’, ‘kindest’, ‘generous’, ‘trustworthy’, before inviting the viewer to contribute a mugshot of themselves to add to the database.

A number of projects referenced spirituality, myth and magic in relation to technology. Artists working with technology have been doing this for decades - see Nam June Paik’s TV Buddha (1976) - but there was a marked presence of these at the festival. Of course contextualising through reference to culture is how we make sense of the world, so it comes as no surprise. Some were moved by techno-animism, like artist Sputniko!’s talk in which she discussed the charms sold by Japanese shrines to protect your computer against malware and viruses, or Etsuko Ichihara’s Digital Shaman Project, which draws on Buddhist beliefs to let a deceased loved one live on for 49 days as a robotic avatar. They called to mind James Bridle’s work Autonomous Trap 001, where he uses an autonomous vehicle’s system against itself by drawing markings in a salt circle which, once entered, the vehicle is unable to leave. As we increasingly feel wary of emerging technologies, especially those apparently magical ‘black boxes’ whose inner workings we don’t understand and apparent autonomy we struggle to accept, turning to myth and magic as a creative context within which to question and understand them makes a lot of sense. 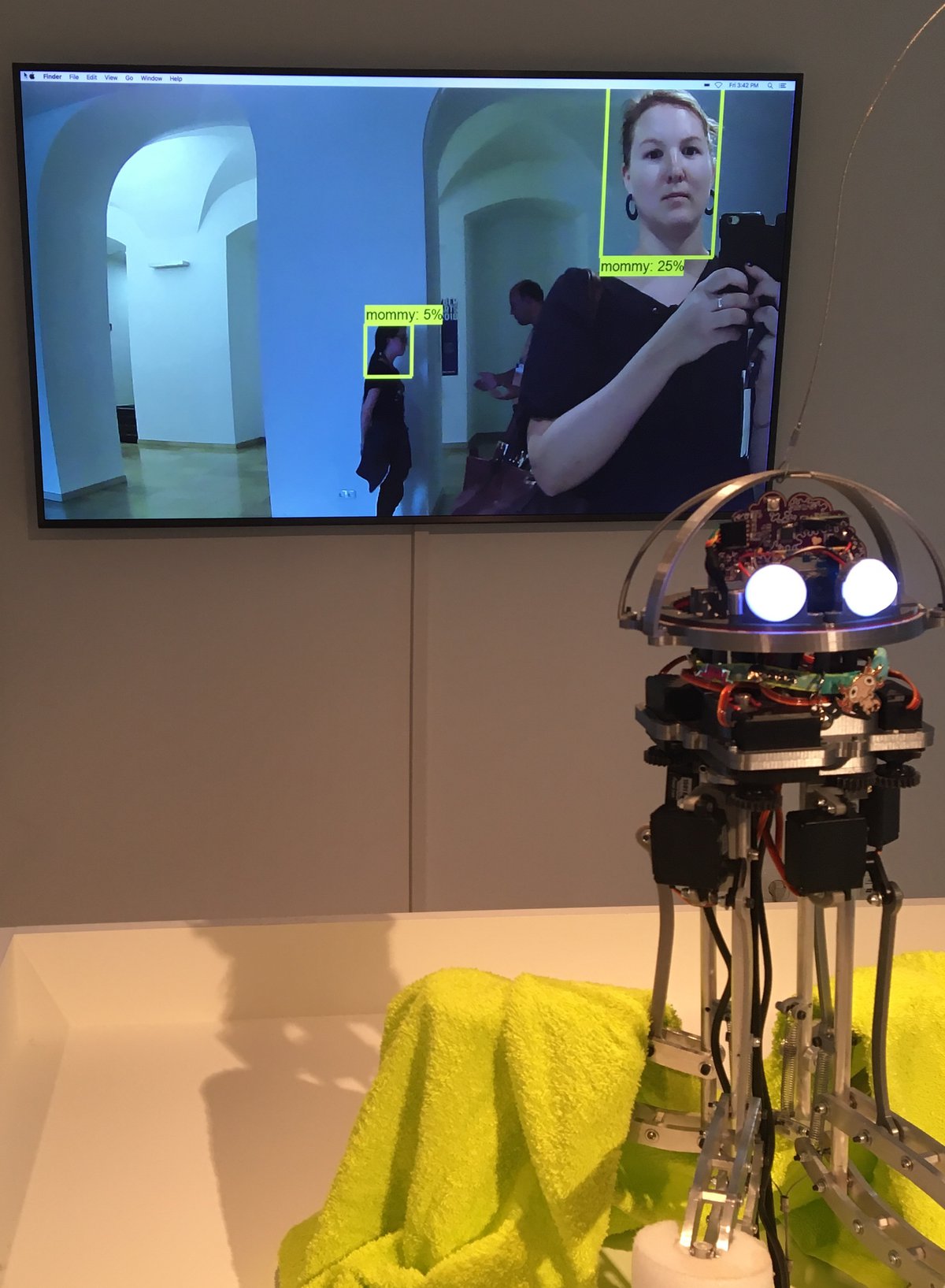 We’re increasingly used to coming up against the challenges of applying machine logic to the nuances of a very human world, whether it’s how machines could detect emotions, or how to translate the reasoning behind algorithmic decision-making to something we can understand and relate to. Curiously a number of projects I came across were focused on doing the very opposite - how to help us humans understand and empathise more with machines. They went from the extreme anthropomorphism of ‘Gogo’s Dream’, a project aiming to fulfil Google Home’s ‘dream’ of duetting with Stevie Wonder, to the bizarre, such as Who Wants to Be a Self-Driving Car? which helped humans empathise with automated vehicles by letting them ‘become one’, using inputs in a VR headset to control movement. But they all indirectly point to the troubling notion that it’s already a machine’s world, and we’re just living in it. Underlying all of them is the idea that human and machine are relatable entities, that it makes sense to compare the two because we’re already on a par. Kasia Molga’s Human Sensor, in which the artist uses her body to become a human air-pollution sensor, called to mind the many stories that emerged this year of ‘pseudo-AI’ - low-waged humans being employed to simulate AI agents. The superficially cute Gogo’s Dream is a reminder of how far some of us already are down the road of welcoming voice-controlled AI assistants into the heart of our homes and families. And as delightfully bonkers as the human self-driving car was, it prompted reflection on the working practices of big tech firms, such as Amazon’s warehouse workers or its Mechanical Turk marketplace, and of course on the current plight and uncertain future of Uber drivers. 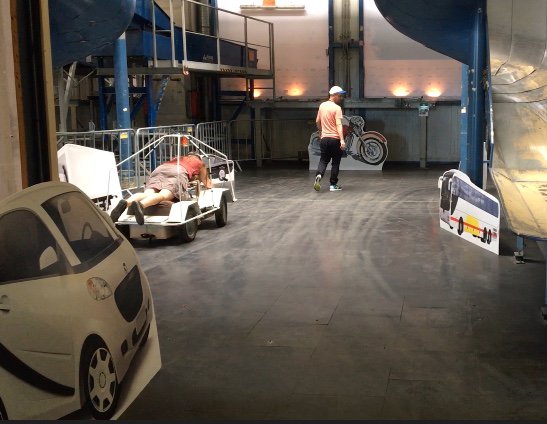 The projects showcased at Ars Electronica don’t always hit the mark. For a festival self-described as ‘for art, technology and society’ it can sometimes feel there’s a disproportionate preoccupation with the second of those three. Bringing together such a vast and sometimes disparate collection of ideas, people, and projects together, the multitude can feel overwhelming: it’s physicalised information overload, where a flashy tech demo of swarming drones can sit next to a madcap ‘orchestra’ of obsolete electronics equipment. It can be exhausting as a visitor to have to generate the critical voice yourself, but this is where the true value of the festival lies - with a bit of effort, even the silliest-seeming projects emerge as thought-provoking ideas with a crucial role to play in surfacing the knotty problems of how tech, culture and society intertwine.