Why are we seeing more digital social networks in creative domains?

The rise of specialised social networks

Social network sites get more attractive to join as more people use them, resulting in a tendency for single platforms to grow to monopolise specific areas. This makes it harder for new-entrants to compete directly with incumbents, encouraging the development of social networks in other areas.

Many of these domains relate to creative activity.[1] For example, the world’s largest photo sharing site, Instagram, the music sharing site, SoundCloud, the online publishing site Medium and the Chinese social network, Douban, which is related to film, books and music.[2]

There is also GitHub, the largest open source collaboration and code sharing site, Thingiverse, the largest 3D printer design community for discovering and sharing 3D models, and OpenProcessing, the algorithmic design sharing site - all of which have social network functionality.

Ello, a privacy-centred social network, has become a home for individuals showcasing creative projects, and there is also the Dots social network, focussed on creative workers and companies.[3]

Creative types: Why is there a growth of social networks in creative areas?

There are several reasons why we would expect to see digital social networks adopted in the creative domains, relating to common characteristics of creative activity.

One of the reasons why smaller scales of production are common in creative industries is that it can be possible for an individual to create something in ways not always viable in other domains.

Many manufacturing and services activities, for example, require significant amounts of capital equipment to produce anything, such as car plants, steel works or aeroplanes.

In terms of networking, there are legal restrictions on companies working together and sharing information, which become much more pointed with larger scales of production as it tends to raise more competition issues.

The importance of social networks in creative production and consumption Our physical social networks are crucial in all areas of life, but there are reasons that this is particularly important in the creative industries and therefore natural to embody in digital form.[5]

On the supply side, this relates to the smaller scales of production. With larger companies, many of the relationships between people are, to some extent, formalised by permanent contracts and company hierarchies. In the creative industries, where there is a large pool of freelancers and small firms, a lot of these processes are mediated more informally through the social networks between people and companies, and the collaborations created by projects.

On the demand side, creative products are often strongly differentiated, and quality (sometimes) a matter of socially determined tastes. In contrast to when we buy more homogenous products, there is also more public sharing of purchasing decisions as it says something about us. As a result, our choices are influenced by our social networks leading to trends in consumption, as happens in areas like fashion, music and design. 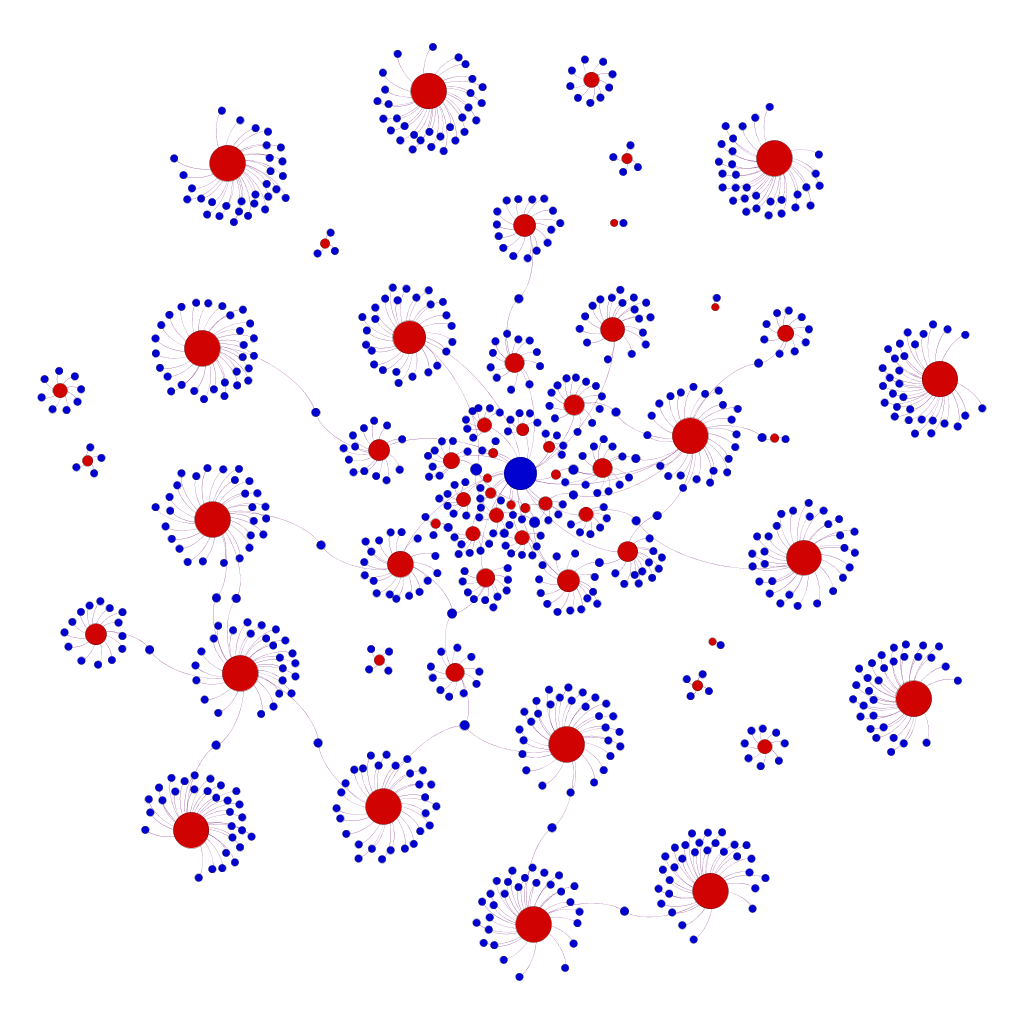 People who have contributed (red circles) to the Processing graphics software (the central circle) on GitHub, and the other software repositories (dark blue circles) on GitHub that they receive notifications of activity on (the connections).

Specialised platforms have a smaller constituency for advertising, than sites with larger general audiences like Facebook and Google. However, as the site activity relates to productive and potentially commercial activity, this creates new opportunities to monetise site usage.

It is also arguable that data collection to target platform users with advertising is less relevant for specialised platforms, as platform use is a substantive indication of interest in a particular area.[6]

For example, GitHub offers users a freemium model where they can pay to have a private software repository where the code is not shared with others; distinct from the standard free option where code repositories are open to all.

In addition to advertising, SoundCloud offers a premium facility where users can have access to better diagnostics and revenue shares from plays on the platform.

By building a community around the printer designs, Thingiverse, which is owned by Makerbot who also make 3D printers, is leveraging its social network and the designs it creates into demand for the printers. The Dots provides a paid recruitment function for employers based on the community using the platform.

Back to life: This is not going to replace physical creative networks

Digital social networks are becoming more important as a basis for creative communities, opening exciting opportunities for online creation, collaboration, learning and distribution. However, while these networks will grow in sophistication and economic importance, they won’t replace physical social networks in creative industries any time soon.

The phenomena of the physical clustering of creative activities is well known, and is something we have observed in our mapping work of creative industries at Nesta, in places such as Brighton and Bristol.[7]

This is about access to the richer pools of talent and jobs that larger, specialised creative labour markets and their associated bigger, personal social networks provide. It’s also about how face-to-face interaction between people facilitates the spread of ideas.

Digitisation has also made physical location more important, as rapid technical change leads to a premium on the learning opportunities possible in denser clusters. Skilled workers are likely to have more options and so be more concerned about the surroundings. All of which feeds back on itself, reinforcing the strength of geographic clusters.

As digital change has made parts of the creative supply chain less commercially viable, it has sometimes made physical based business models more important, such as has happened with live music.

Social networks are also, on a more basic level, about people, as the most famous British creative micro-cluster of the 20th century, the Bloomsbury group, shows, based, as it was, initially around a set of Georgian Houses in a square in London’s Bloomsbury.

Included among its members were the writers Virginia Woolf and E.M. Forster, the economist John Maynard Keynes, the historian and biographer Lytton Strachey and the artists Duncan Grant and Vanessa Bell.

Almost as striking as the group’s creativity is the complexity of its internal personal relationships.[8] Not everything can be done online.

[4] In terms of networking, there are legal restrictions on companies sharing information between each other or working together which become much more pointed with larger scales of production as there are fewer competitors in the market.

[6] This is one of the reasons why traditionally specialist magazines with relatively small readerships have been able to exist in that the audience is self-selecting, meaning that advertisers are prepared to pay relatively high rates.