In this post, we share the learning from a co-design workshop that we ran as part of our project that aims to use collective intelligence design and data to better understand some of the big challenges around earlier diagnosis in bowel cancer.

The workshop was attended by people with lived experience, as well as healthcare professionals, technologists and cancer charities, and was a culmination of our collaboration with award-winning design studio Humanly who have spent the last three months synthesising existing research and supplementing this with interviews. The day was an opportunity to share our learning, and apply the methods and tools of collective intelligence design to re-imagine the bowel cancer diagnosis journey.

Why collective intelligence and cancer?

At its most simple, collective intelligence is when many individuals work, think or act together to achieve a common goal such as solving a problem, making a decision or generating a prediction. Over the past nine months Nesta’s Centre for Collective Intelligence Design has started mapping projects worldwide that make use of collective intelligence, to identify the methods and (often digital) tools that are used to bring together this distributed collective potential. Unsurprisingly there are many promising examples in the field of health where there is a clear incentive to work together to improve outcomes.

Bowel cancer is an example of a growing health problem where data could help save lives. It's the 4th most common cancer in the UK (behind breast, prostate and lung) and over half of the annual 41,000 bowel cancer cases are diagnosed late. Despite significant investment in cancer treatments, screening and diagnostic tests over the past 20 years, bowel cancer has a lower survival rate in the UK (60%) compared to comparable countries such as Australia (72%). The data is clear - nearly 98% of people would survive bowel cancer for five years or more if detected at stage 1 compared with less than one in ten people diagnosed at stage 4.

Humanly’s researchers reviewed and synthesised over 60 documents on the subject of late diagnosis in bowel cancer from academic publications to published reports. They also interviewed 14 people with lived experience, four GPs and one colorectal surgeon, and seven individual experts from cancer charities. 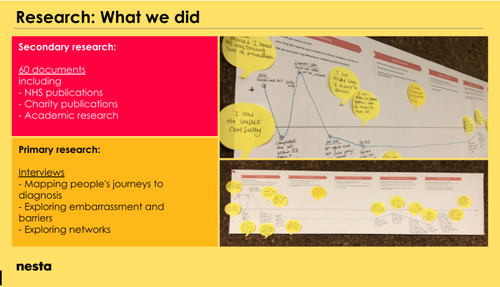 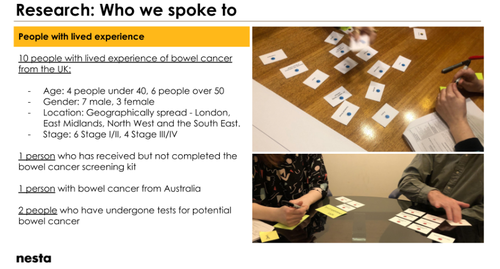 The output is this incredible Routes to Diagnosis Map which maps people’s journeys to a diagnosis from prevention through early intervention and a final diagnosis, as well as mapping all of the elements of the system across community, primary and secondary care. Extracts from the research, including quotes from the interviews, brings the data to life.

During the workshop Humanly shared three stories from real people living with bowel cancer, demonstrating some of the complexity and variation in paths towards a bowel cancer diagnosis.

Bob is a 54 year old man who was experiencing stomach pain. He self-monitored his symptoms for a week then went to see his GP who referred him to tests in secondary care via the non-urgent referral route. While Bob was waiting, his symptoms became more severe and he attended A&E. The first two times he visited A&E he was not given any further tests and was given pain relief instead. On his third visit to A&E he was diagnosed with late stage bowel cancer.

Kim is a 36 year old woman who, like Bob, had some ongoing gut issues. Her decision to consult her GP was motivated by her family history. Her Dad had been affected by bowel cancer at a young age and Kim was concerned that bowel cancer could be a possible cause of her symptoms. Blood tests showed that Kim was anaemic and she underwent a range of non-bowel cancer related tests. Kim’s anaemia got worse and she was referred for a colonoscopy, where she was diagnosed with late stage bowel cancer. As she was very young to have bowel cancer, she also had a genetic test which revealed that she had Lynch Syndrome, also known as hereditary non-polyposis colorectal cancer (HNPCC), a type of inherited cancer syndrome associated with a genetic predisposition to different cancer types. Kim was aware of her family history of bowel cancer but did not have any genetic tests until after her diagnosis.

Tim is a 68 year old man who had received the bowel cancer screening kit in the post, completed the test and returned it. The results came back negative and Tim thought nothing more about it. A short time later, he was taking a blood test as part of a routine checkup when his GP noted that he was anemic. Tim’s GP promptly sent him for a range of non-bowel cancer tests which came back negative. Quickly excluding the other possible reasons for his anaemia, Tim’s GP sent him down the two-week referral route. Tim had a colonoscopy, and was diagnosed with early stage bowel cancer.

These real stories offer an insight into just how different many people’s experiences are and the sometimes circuitous routes to diagnosis, particularly for individuals who don’t fit the typical risk profile for bowel cancer.

Taking advantage of the expertise in the room, we took time to discuss what was “missing” from our research and map. One key area that surfaced was the issue of trust: both from the perspective of people with lived experience not feeling trusted by their GP to know something was wrong and also between different levels of the healthcare system not trusting each other’s decisions (eg primary / secondary care). It was also highlighted that certain symptoms are often either missed, for example fatigue, or dismissed as other things, for example “women’s problems”. It became apparent that while there is some excellent clinical practice within primary care, there is also huge variation in how GPs make decisions about who to send for investigations. Deeper investigation was called for into why bowel cancer in young people is increasing (6% per year). Lastly, many discussions highlighted the different experiences between certain groups, for example men, people from BAME communities and lower socio-economic groups, and their different routes to diagnosis as a place for further exploration.

How could collective intelligence design help?

There are many promising examples of machine and human intelligence coming working together to improve health outcomes. Digital platforms like Patients Like Me connect distributed individuals living with rare conditions and create networks. Open source DIY tools and sensors like the Open Artificial Pancreas System are continually improved and developed by a global community. New algorithms are also helping us to search, aggregate, analyse and visualise data changing the ways we are able to remember and attend to information.

Collective intelligence can be used to:

Putting the method to the test

The combination of mapping lived narratives and insights from existing datasets helped Humanly to identify five potential leverage points in the system where interventions could be targeted. We used these as the foundation for “How Might We” problem statements to provide a starting point for our idea generation: 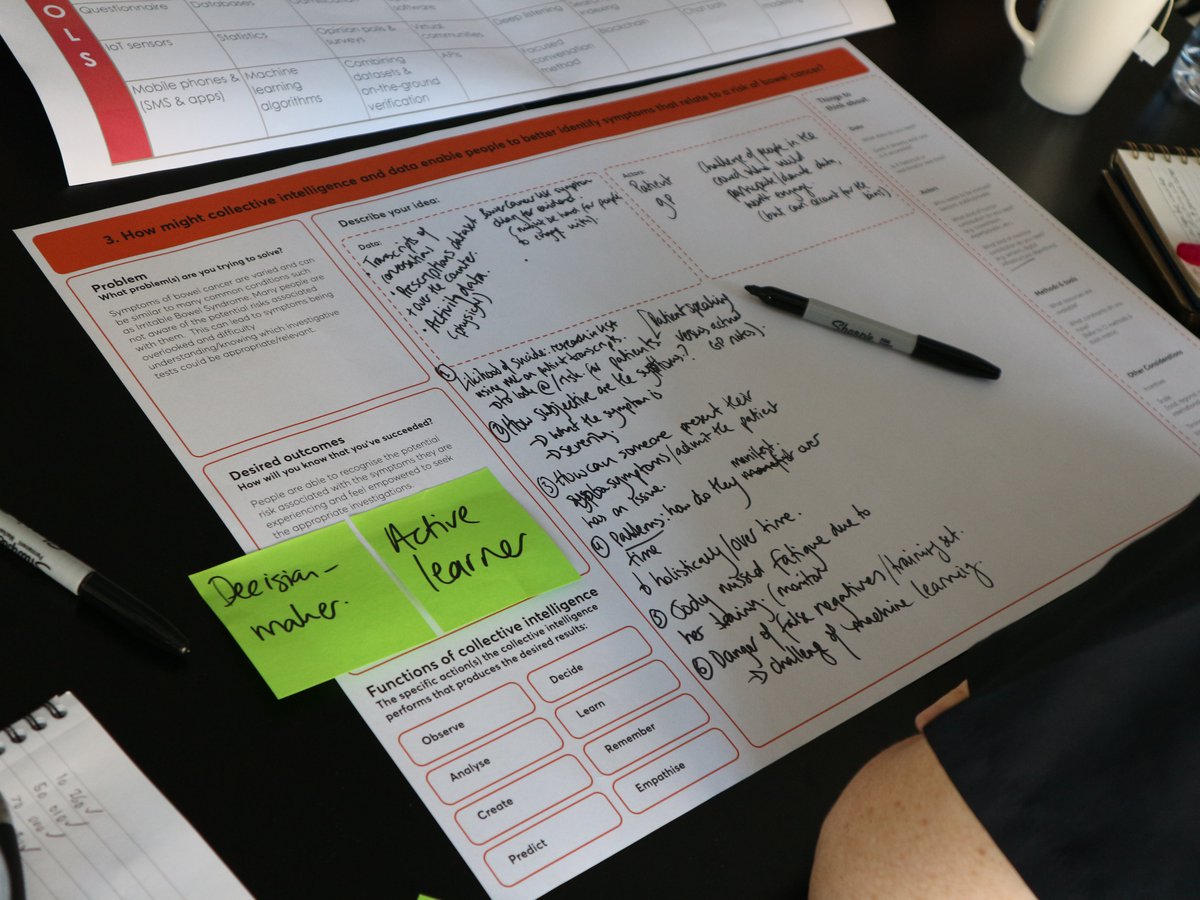 Our design canvases invited participants to consider a set of key questions to help generate collective intelligence solutions to their chosen problem statements:

Importantly, the discussions around all of the tables surfaced many common challenges such as the need to consider multiple incentives that could be tailored to the different parties needed to initiate and sustain multidisciplinary and cross-sector partnerships. The groups also recognised that success would be equally reliant on managing to capture the tacit knowledge and expertise of lived experience, as well as technical skills and suitable governance arrangements to design and manage online platforms, apps or repositories of data.

There are already many important initiatives that are trying to address the problem of late diagnosis in bowel cancer. Cancer Research UK’s Accelerate, Coordinate, Evaluate (ACE) Programme is an early diagnosis initiative running across England, with the aim of sharing learning & good practice across all cancers. Bowel Cancer Intelligence UK is creating a COloRECTal Repository (CORECT-R) - a secure data repository with a huge array of data from across the cancer pathways of diagnosis, treatment and outcome. We are also encouraged by the work of NHS England to lower the screening age in England to 50 and increased efforts to implement the Faecal Immunochemical Test (FIT) as standard.

Our research seeks to complement these initiatives and explore how the combination of collective intelligence design and data could generate novel insights and game-changing ideas in improving cancer outcomes. We’d love to share the research and resources we’ve created so far with others working in this space, and to hear how these methods and tools could support your work.

If you work on collective intelligence for health or are interested in learning more, please contact Aleks Berditchevskaia, Senior Researcher, Centre for Collective Intelligence Design on [email protected].