Labour released their manifesto this morning – here, we use the Political Futures Tracker to provide a bite sized summary of top themes. We tell you what sentiment Labour are expressing about these themes and how future thinking they are about most mentioned big issues.

Labour's manifesto provides party perspectives on a broad range of issues, as is characteristic of this type of election document. The Political Futures Tracker enables us to understand Labour's stance on these big issues that will win or lose the election.

The UK Economy is the most important theme in Labour's manifesto.

This theme shows over double the frequency of the second most mentioned topic - Employment.

The manifesto states that a Labour Government will cut the deficit every year, get the national debt falling and a surplus on the current budget as soon as possible in the next Parliament.

Immigration does not feature in the top 20 themes from Labour's Manifesto. 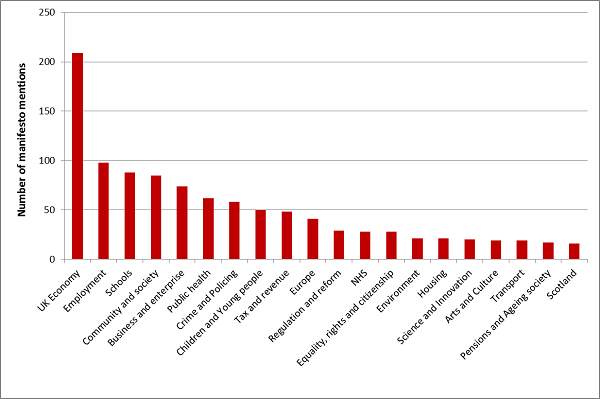 Scotland has crept into the top 20 themes...

... Labour makes manifesto commitments to a Home Rule Bill to give extra powers to Scotland over tax, welfare and jobs and Violence against Women and Girls Bill.

Arts and Culture also features in the top manifesto themes, and is highlighted by a number of commitments, some of which include:

2) Rebalancing arts funding across the country.

3) Increasing the number of apprenticeships in the creative industries.

4) Creation of a Prime Minister’s Committee on the Arts, Culture and Creative Industries, with a membership drawn from all sectors and regions. The Committee would bring issues of concern directly to the attention of the Prime Minister. 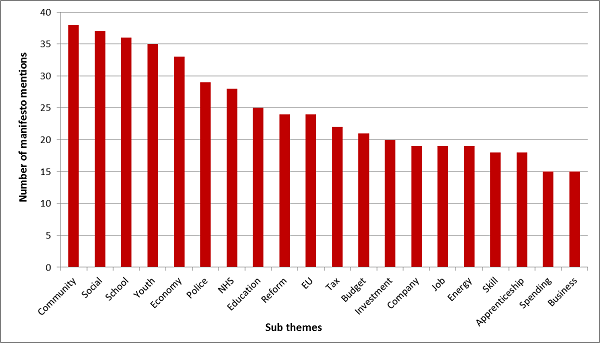 This links to Labour's Election manifesto released last week, which heavily emphasised the role of schools. In terms of policy, we see that Labour pledge to expand free childcare from 15 to 25 hours per week for working parents of three and four-year-olds, paid for with an increase in the bank levy and introduce a legal guarantee for parents of primary school children to access wraparound childcare from 8am to 6pm through their local primary school.

Though the NHS is not at the very top of themes mentioned, it does feature heavily in sub theme mentions and as we see from sentiment analysis below, is mentioned in a net positive way. Sentiment analysis identifies words that have a positive or negative connotation within the context of the political text, for example in Labour's manifesto negative sentiment is expressed here about Employment (as seen below) ...

Too many have been driven from secure, full-time work, into precarious, badly paid jobs – many working on zero-hours contracts

And on the other side of the coin, there are a large number of positive associations with the UK Economy, for example...

We believe that Britain only succeeds when working families succeed. As the economy at last recovers, people want the opportunity to use their skills and talents to make a better life for themselves and their children. 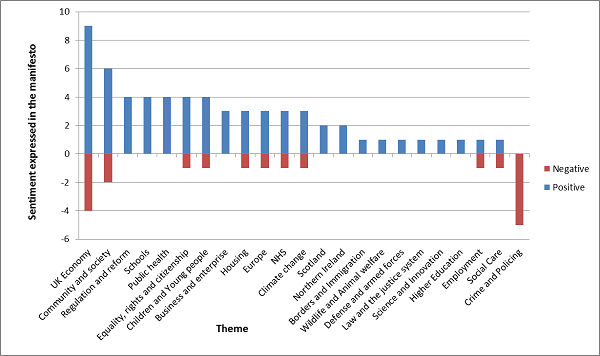 From this, and the Education manifesto, we can see that Community and society is used by the Labour party in a positive way (often in the context of societal vibrancy and development of a stronger economy).

We see solely negative association with Crime and Policing. The manifesto tends to mention this in relation to strengthening Britain’s intelligence agencies and tackling extremism - which often uses negative language of clamping down, restriction and confrontation.

Future thinking analysis automatically identifies words that are time sensitive, and codes the extent to which a theme is being written about in a past, present or future context. This tool allows us to compare and contrast how future thinking political texts or tweets are from parties, individual politicians and candidates.

As we know from the Twitterstorms of recent weeks, Labour pledge to abolish non-dom status, and introduce a tax on properties worth over £2m, these themes drive up future thinking mentions of Tax and revenue and Financial services. 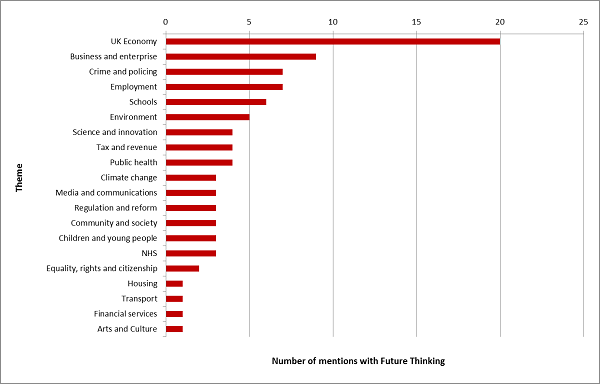