The media’s reporting of women in the creative industries has changed markedly in recent years. Not only has there been a substantial rise in references to women, albeit from a low base, but greater space has been afforded to women’s thoughts and opinions.

The Creative Industries Policy and Evidence Centre (PEC) has used big data and machine learning to analyse over half a million articles, accessed through The Guardian’s open API and published across almost 20 years, to show gender imbalances in the media.

We wanted to understand not just the number of men and women in the creative industries, but also how visible they were. We went beyond the numbers to begin to tease out what it feels like to be a woman or a man in the sector. 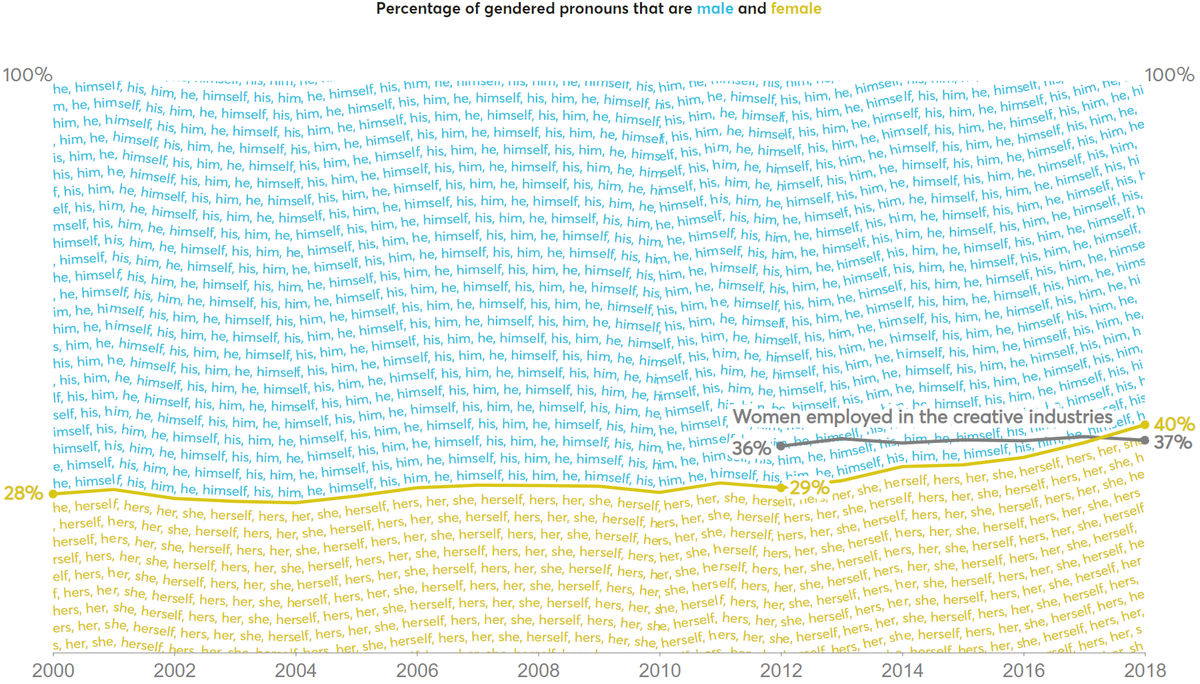 This graphic shows the percentage of gendered pronouns that are male and female. View the full data visualisation and analysis

1. Amount of space given to women in the newspaper

The last five years has seen a large relative increase in references to women. From 2000-2013, where pronouns were used in an article to identify a person’s gender (eg. she, her, he, him), less than a third were referring to women. By 2018, the percentage of pronouns that were female had reached 40 per cent. This means that the amount of space given to women in these articles now exceeds the proportion of women working in the Creative Industries. In 2000, just under a quarter of quotes that were followed by the words ‘she’ or ‘he’ (as in ‘she said’) were by women. Based on current trends, 2019 may be the first year in which women are quoted as often as men in a given month.

Compared to men, there is more focus on particular sounds made by women, such as ‘laughs’, ‘cries’, ‘giggles’, and ‘coos’, and non-verbal reactions, such as ‘smiles’, ‘grins’ and ‘nods’. Words that imply creative achievements and leadership roles were more likely to refer to men than women, such as ‘directed’, ‘performed’, ‘painted’ and ‘designed’ as well as ‘managed’, ‘founded’ and ‘launched’.

In 2018, the Fashion section gave the greatest space to women, and is the only section where the balance has tipped over 50%. On the other hand, in the Technology and Games sections, female pronouns comprised just a quarter of all pronouns in 2018. While these figures are low, they are in fact higher than the proportion of women working in IT, Software and Computer Services, which was estimated at 21 per cent in 2018.

The research is focused on articles within The Guardian because, unlike any other major newspaper in the UK, it offers free open access to its content. This research demonstrates how big data and machine learning can provide new insights on gender inequality.

We celebrate the creative leaders and entrepreneurs who contributed to our recent project in Latin America.
Project Update
26.07.21

This one hour webinar included an introduction to the Arts & Culture Finance funds, a discussion on capital projects and Q&A.
Event
28.05.21

Nesta's Arts and Culture Finance team held a one hour webinar including an introduction to the Arts & Culture Finance funds, a discussion on impact measurement and a Q&A with IRIE! dance theatre.
Event
28.05.21