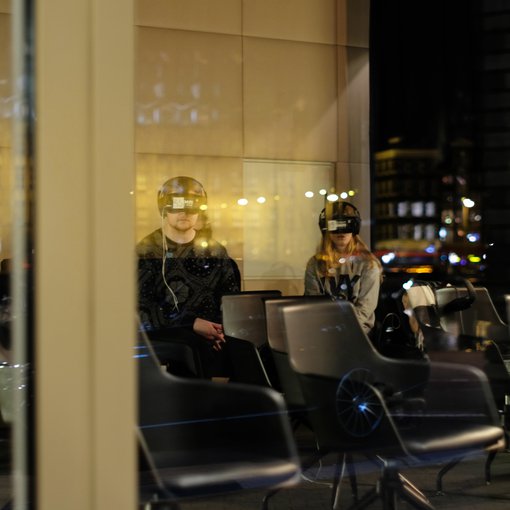 In 2017 and 2018, we have seen exciting examples of VR experiences being created by cultural institutions in the UK. Major galleries and museums are likely to have virtual experiences attached to their exhibitions, such as the Modigliani exhibition at the Tate Modern or the Natural History Museum’s Hold the World VR experience with David Attenborough. Film, art and media festivals are opening their arms to immersive experiences, with stalwarts like Sheffield Doc Fest showcasing the best of the sector. Meanwhile its now no longer a novelty to see large-scale virtual commissions, such as Marshmallow Laser Feast’s ‘A Colossal Wave.’

The research suggests that the wider immersive sector, which includes augmented and mixed reality, is in fine health too. A study undertaken by Nesta for Innovate UK uncovers over 1,000 ‘immersive specialist’ companies generating over £660 million in turnover a year.

Despite these examples and impressive statistics, however, little is known about how audiences actually respond to VR experiences.

Are they able to differentiate between experiences or is the novelty of the technology still the overriding sensation? Can we disentangle what the cultural value to consumers of these experiences might be? Are we able to provide a sense of whether people might pay for this content in the future?

Commissioned by Digital Catapult, researchers at Nesta and i2 Media Research - a company spun out of Goldsmiths University of London - have been working to address these questions. To this end, we have conducted a lab experiment with 84 participants, giving them pre-and-post experience surveys with two pieces of virtual reality content, along with a follow-up survey after two weeks, in order to try and uncover more about their experiences and reactions to the content. Our survey instrument combines questions from consumer psychology and cultural economics.

Audiences are sensitive to different aspects of the virtual experience

The lab trials we conducted show that people are sensitive to the different types of content on offer. While all three pieces shown to the lab trial participants (two per person) received strong positive evaluations overall, there were notable differences on a range of indicators, such as whether the participant found the content ‘emotionally moving’ and the extent to which the content generated ‘unusual perceptual experiences’.

Within the study we were able to isolate some of the key predictors of what drove individuals to have ‘good’ (which were made up of an average of a range of different metrics) experiences within VR. While we only tested three pieces of content, the common predictors of what led to a good experience were:

In each instance, the more intensely the individual experienced facets of these two scales the more strongly it predicted their overall positive evaluation of that piece of content.

In a more developed market, audiences will be willing to pay for immersive experiences

Testing the economic viability of content is challenging when mainstream adoption of the technology in question hasn’t taken place yet. Very few households in the UK own VR headsets and computers with the high specifications needed to run VR content, so questions about price are hypothetical to most. We therefore tested individuals willingness-to-pay for content in two future scenarios.

The first of these was a home-use scenario, where we asked how much people would be prepared to pay for content on a one-off rental basis, assuming they had all the equipment. The second scenario asked people whether they would be willing to pay for the experience to go to an ‘arcade’ style setting with friends, and take part in a few pieces of similar content consecutively. This concept has taken off recently in countries where arcades are more prevalent, such as Japan.

Overall, 58% of trial participants stated that they would pay for the home experience, and 70% for the arcade experience. The optimal price point for all three contents on average was £9 for the home scenario and £17 for the arcade scenario. While this was a small study, this has a high level of validity with current pricing of VR content, for example through the VIVEPORT or at one-off installations (such as The VOID, which retailed for £32.50).

The UK looks set to double-down on the momentum around VR and immersive. The Industrial Strategy Challenge Fund is betting on immersive content through it’s Audience of the Future programme, meanwhile funders such as Arts Council England are starting to invest in structured programmes such as Creative XR. Platforms have seen the potential too, with HTC Vive announcing a structured Arts Programme.

In the midst of this funding and interest in the field understanding audiences will remain critical, and we look forward to developing the methods from this study further in support of the sector’s development.