What we learned about shifting how we see, think and act in the public sector.

As Director, Sonja led the team responsible for spreading innovation skills and strengthening the conditions that allow innovation to thrive.

Mindset. It’s a term we both hear and use repeatedly in our work within public sector innovation, particularly when discussing change, transformation or learning programmes. Developing an ‘experimental’ or ‘innovative’ mindset is agreed upon as the goal, but often without pinning down what that actually looks like.

Working with Essex County Council (ECC) recently, we developed a learning programme that delved into the driving forces behind the behaviours and decisions of its staff, which helped us to pinpoint where and how we could better support their mindset development.

Mindsets can be a nebulous concept. Defined as a person’s way of thinking, they’re opinions or a collection of attitudes. It’s a commonly used word, whether talking about people having a creative mindset or a social mindset, or as referred to more prominently in recent years Carol Dweck’s growth or fixed mindset.

In whatever guise mindsets come, they’re understood to be the set of beliefs we hold that help us to understand and react to reality, and our intentions to shape it in a certain way. These differ depending on culture, experiences, education and work. Attitudes grow from our beliefs and experiences, and shape how we respond and feel towards certain situations, things or people.

If mindsets inform how you perceive situations, what you pay attention to, how you make sense of them, and ultimately, how you decide to act, then essentially, they are a set of beliefs which shape how you see, think, and act.

See refers to our perception system - what we see and hear, not just in the physical world, but socially, culturally, politically. How we ‘see’ things is largely determined by the ‘frames’ we use to make sense of reality. These are often shaped by our education, work experiences, cultural backgrounds. For example, when an urban planner looks at traffic congestion, they may see infrastructure as the main issue. When a psychologist looks at it, they may think about human behaviour.

Think refers to the way we make sense of situations (consciously or subconsciously). We develop mental models of how the world works and anticipate how causes and effects may lead to certain situations. This also affects the way we interpret information, create patterns and ask critical questions.

Act refers to the ways we use the data and signals we see and think about to inform the behaviours and activities we deem possible and appropriate, and the manner in which we’ll carry them out.

What is an innovative mindset?

To establish the key elements of an ‘innovative mindset’ we drew on our competency framework, which delves into the key skills, attitudes and behaviours that public sector innovators combine to successfully tackle problems. We took the three ‘skill areas’ to shape the three core mindsets: The Collaborative Mindset, the Experimental Mindset and the Action Mindset.

Collaborative: Driven by the “we” rather than the “me”

This mindset seeks to understand situations from multiple perspectives. It is concerned with demonstrating empathy and humility to better connect, engage, understand and help build ideas with, rather than for, people.

Experimental: Led by curiosity and the desire to learn

This mindset focuses on learning - through lived experiences, learning from others or just trying new things in a different way. Using these lessons to create solutions that best fit the challenge being tackled.

This mindset requires the energy and belief that things can be done to alter and improve the status quo, and that there are opportunities within the environment which can be seized upon. It is concerned with helping create the conditions for change and action, either through gaining support, mobilising people, resources or spreading knowledge and examples of success.

Like many other councils across the UK, ECC is responding to increasingly complex challenges with ever limited resources. As a result, their Organisation Development and People team (ODP) are currently undertaking several initiatives to transform the culture of their workforce, instilling a more innovative approach to the work their 6,500 employees carry out.

The Mindset Challenge built on the 9-12 month learning programmes we’ve run in Canada and Australia as part of States of Change, where independent evaluation indicates that participants’ mindsets were challenged and had shifted. These longer programmes had time built in for teams to rehearse new tools and methods on live projects, which gave them space to reflect with the support of their faculty and peers. But we wondered if this could be replicated in different contexts.

With the support of the ODP team, we designed a programme for ECC that would start by creating the safe space we knew would prompt the right level of debate and peer learning. Participants were encouraged to openly reflect on the challenges of working within a local council and take advantage of their peer network to create an open and supportive learning environment. Their investment in this was evident and as was their openness to learning in a different way which was more about the approach than the tools themselves. We were able to shift up a few gears and jump deeper into examining how they as a group and as individuals could take greater ownership of their own behaviour - be the change they wanted to see.

“Usually a strong jolt is needed before people realise the traditional way of doing things is no longer adequate.”

The programme included opportunities to ‘jolt’ thinking and created multiple ‘aha!’ moments for individuals and teams. Those who participated were beginning to be more comfortable questioning the way they work, their frames, their own established beliefs, and therefore becoming more open and receptive to new, more innovative, way of working.

The two ‘Mindset Challenge’ pilots we ran (9 days and 3 days) differed in pace, content and attendance numbers - providing opportunities to test multiple aspects of the programmes. However, they both followed this general structure:

From skills to attitudes

Mindsets are influenced by attitudes, and they also influence attitudes themselves - so we needed to draw the key attitudes of each mindset into the programme content, as shown below: 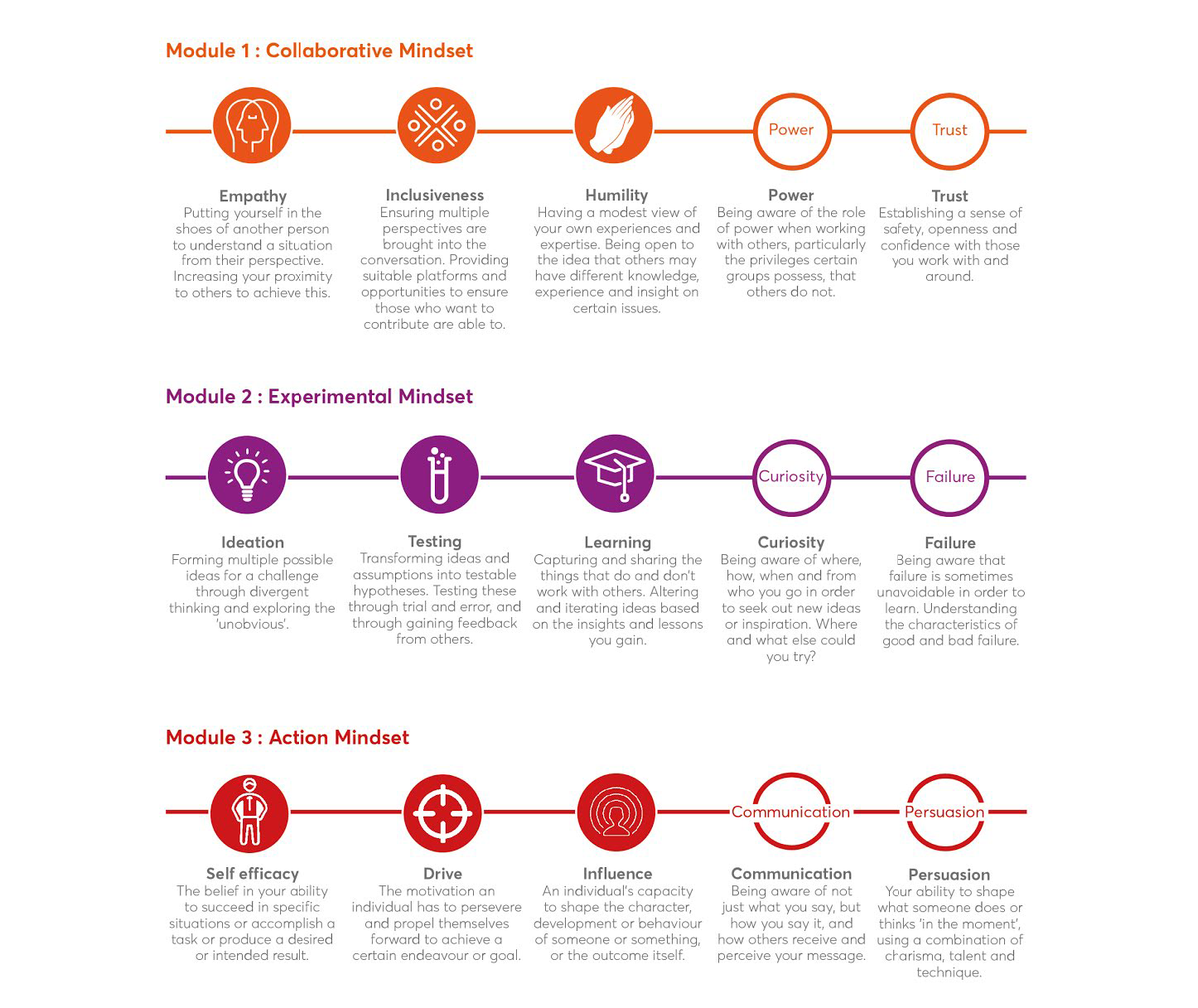 The Mindset Challenge was meant to feel different from other initiatives participants had gone through. It was designed to challenge attendees and stimulate critical reflection of the way they see, think and act in their practice.

In terms of challenging mindsets, there were different responses from participants in what they thought this entailed, and how successful it had been:

The notion of the programme ‘feeling different’ seemed to resonate with the attendees in several ways:

Do mindsets lead to culture change?

Staff who possess an innovative mindset are pivotal, but are still only one piece in the puzzle. The Mindset Challenge has reinforced our understanding that shifting and changing mindsets, or ways of working in the public sector, isn’t guaranteed to happen in a three-day, nine-day or even 12-month learning programme.

Overtime, people can shift mindsets - but lasting change requires an environment that actively supports them in doing so. There are much wider issues around trust, blame culture, communication, openness and fear that are prevalent and need to be addressed simultaneously. If they’re not, staff may feel more disillusion and negatively than they do currently.

In the next blog, we’ll discuss the ways individuals can recognise and seize their own agency in creating environments that will support culture change.

As Director, Sonja led the team responsible for spreading innovation skills and strengthening the conditions that allow innovation to thrive. 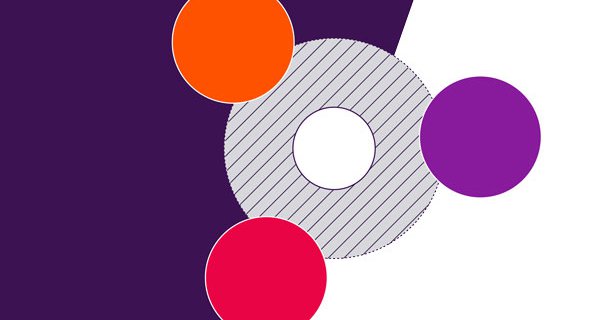 A guide to getting the most from Nesta’s Competency Framework for Experimenting and Public Problem Solving.

Exploring the unobvious: from methods to mindsets

Why we need to go beyond methods, and instead build a mindset that allows us to explore unobvious solutions in a much more systematic way. 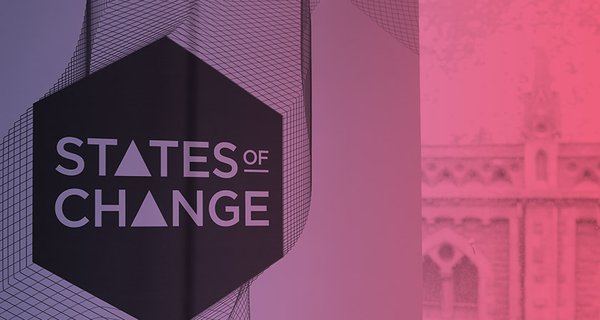 How our States of Change initiative is bringing together a global community of practice dedicated to improving public innovation.