At Nesta we believe innovation is essential to our future prosperity and should be directed towards society’s most important problems in ways that benefit as many people as possible. But innovation doesn’t just happen. It needs fuel.

The fuel that most innovation policy makers focus on is investment in research and development (R&D). R&D intensity (the amount a country invests as a proportion of GDP) is often used as a proxy for innovation prowess, so the OECD’s annual country ranking is keenly followed in innovation agencies around the world.

That’s why the UK government chose to set a target of 2.4 per cent of GDP to be spent on R&D by 2027 - it’s the the current OECD average. Despite political changes over the summer, this target remains in place (as do similar targets from Labour and the Liberal Democrats). The Treasury has just restated the commitment and pledged to “set out plans to significantly boost public R&D funding” this autumn - news that was welcomed across the science and innovation community.

Some projections estimate that public investment in R&D will need to reach £20billion per year by 2027 to reach the target - roughly double what the government currently spends. (The private sector will need to contribute double that again.)

The question the government needs to answer this autumn is: how should this £20billion be spent?

Getting this right is vitally important. Flooding one sector or one geographic area with R&D money can unbalance the system, and prioritising funding for ‘big science’ can skew policy towards eye-catching initiatives while leaving other areas overlooked. The government needs to avoid exacerbating current imbalances or creating new ones as the R&D budget grows.

We have been thinking about this at Nesta. We want to help this government, or any future government, allocate the proposed increases in R&D investment in a way that ensures the greatest possible benefits for UK productivity, prosperity and social impact.

We propose that as the R&D budget expands in the years up to 2027, the government takes a more balanced approach that will fuel the future of the UK economy by helping local places to innovate, addressing the big challenges we face as a society, and helping businesses make the most of their ideas.

We are calling on the government to:

Give control over 25 per cent of public R&D funding (potentially £5billion per year in 2027) to the nations, regions and local places of the UK, triggering a revolution in R&D beyond the South East

The vast majority of the UK’s R&D budget is controlled from Westminster. Allocating a quarter of the money to the nations, regions and local areas of the UK could reduce the gap between frontier places - concentrated in the so-called Golden Triangle of London, Oxford and Cambridge - and the rest. It could mean £5billion coming under the control of local decision-makers (such as local branches of UK Research and Innovation or metro mayors). This would give local areas the power to fund collaborative R&D and innovation projects in accordance with regional strengths. To succeed, this devolution of decision-making will need to be accompanied by significant local capacity building to ensure areas are able to absorb the money and make good innovation investment decisions. Safeguards will also be needed to mitigate the risk that R&D funds are redirected to other priorities.

Mission-oriented R&D funding, where money is directed towards achieving specific societal challenges, is represented by the Industrial Strategy Challenge Fund (ISCF) and currently stands at £487million (2019/20). Proportionally, this represents about 5 per cent of total government R&D investment. Increasing this to 20 per cent would leave plenty for researcher-led science while keeping the UK at the forefront of mission-oriented R&D, in step with Horizon Europe and the US innovation system. To ensure success, the government should perform a detailed evaluation of the ISCF and identify best practice in the UK and overseas, learning lessons and identifying ways to better align missions with public priorities, such as through widespread engagement.

Allocate 10 per cent of public R&D funding (potentially £2billion per year in 2027) to a reinvigorated Innovate UK, safeguarding innovation support

Innovate UK now sits within UK Research and Innovation (UKRI). In spending terms, it is dwarfed by the combined heft of the research councils: its responsive grants programme represents only 1 per cent of the public R&D budget. Making sure 10 per cent of total public R&D funding was allocated to Innovate UK would mean that UKRI would still fund far more research, but it would give innovation a stronger voice within the organisation and prevent Innovate UK being seen as the poor relation of the councils. At the same time, the incoming Executive Chair should reinvigorate the organisation and adopt new ways of encouraging innovation (including inclusive innovation) across the economy. 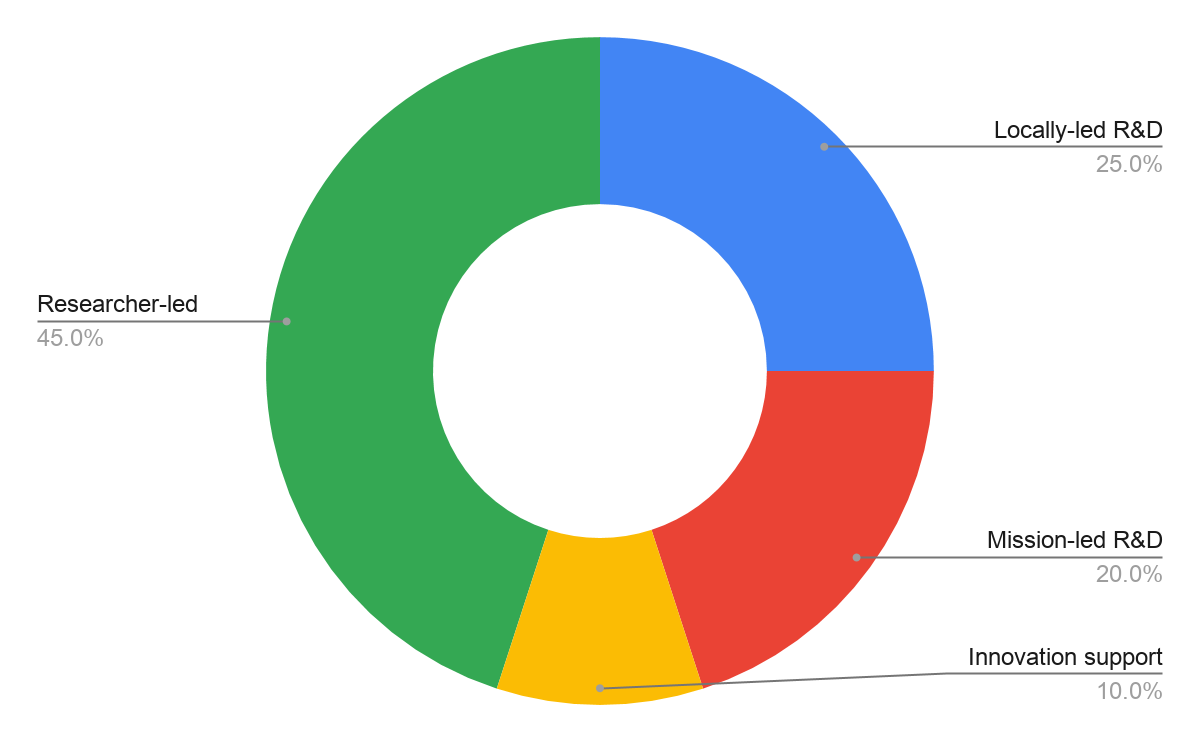 Government must also remember that fuel alone is not enough. It needs to be pumped into a working engine that performs efficiently and effectively. R&D investment will only fuel economic and societal benefits if the engine - the broader innovation system - is fully functioning. Only that way can we bring bold ideas to life.

Alongside increasing the amount of public R&D funding, the government needs to tune-up the UK’s innovation system and make sure the ideas generated by R&D to go on to become new products and services developed by both new and existing companies, driving productivity, prosperity and improving people’s lives.

This is especially important given Brexit. The short term outlook for business investment - including inward investment - is uncertain and there are ongoing concerns about the ability of innovators to live and work in the UK. In this context, the overall health of the UK’s innovation system is at risk.

So we also call on the government to tune-up the UK’s innovation system, by:

Ensuring the UK can continue to participate in international collaboration programmes post-Brexit, and committing to an innovation-friendly immigration regime

People from all over the world should be invited to innovate in the UK: the PM’s recent commitment to visas for researchers and their families was a positive step but this approach should be extended to those in business looking to start companies and scale them up here - not just researchers and scientists. The government should also ensure Associate membership of EU Research and Innovation programmes, such as Horizon Europe, after the UK leaves the EU. This will reduce the risk that the UK falls behind European peers or misses out on the benefits of collaboration.

This means encouraging and supporting emerging innovation in areas like AI and facial recognition while safeguarding the public and making sure new technologies become forces for good. It also means taking a long-term approach to identifying new technologies and engaging the public on how they should be introduced well in advance. This summer’s White Paper on regulation was a positive start, but that needs to be followed up by concrete plans for how the government will mainstream anticipatory regulation in the UK. UK leadership in this area will not only keep people safe, it will also encourage world-leading businesses to innovate here, fuelling private sector R&D and innovation.

Promoting business innovation, including by encouraging diffusion through a new £100 million productivity programme and by targeting corporate incentives

Business innovation is a crucial part of the overall system - companies invest far more in R&D than the government. But most R&D and innovation activity is concentrated in a handful of sectors: other UK firms need to be encouraged to invest and innovate. By promoting the adoption of new technology and the diffusion of innovation across the economy, the government can help UK companies develop their innovation capability and catch up with those that operate at the frontier. The main way government currently does this is through the Business Basics programme. This should be increased in scale and extended to include trialling new ways to help companies innovate. Government should also do more to identify and promote corporate innovation incentives, based on evidence and data, as set out in our recent report, The Invisible Drag on R&D.

The government has an excellent opportunity to fuel the future of UK innovation this autumn, as it brings forward its plan for achieving the 2.4 per cent target and sets out long-term projections for public investment in R&D.

By devolving R&D funding to local areas, promoting mission-based approaches and expanding innovation support, the government can address imbalances across the system.

By protecting international collaboration and immigration, prioritising the safe adoption of emerging technology and encouraging business innovation across the economy, it can create an environment where ideas can come to life.

If the government puts the right balance of fuel into a finely-tuned innovation engine, it can promote prosperity for the long term, make the UK a global innovation leader and bring about real improvements to people’s lives.

Over the coming months, we will be presenting a number of blogs, reports and provocations that will help the UK government - and any future government - fuel the future.