The development of DAOs is based on the idea that an organisation can essentially be described as being made up of people (i.e. its staff) and a set of rules which determine how it will operate (e.g. the appointment, removal and powers of directors, rules for meetings and shareholder rights). DAOs translate these organisational rules into automatically enforced smart contracts which run on a blockchain.

Decentralised autonomous organisations (DAOs) are organisations whose operations are governed by smart contracts. The DAO’s rules and transactions are maintained on a blockchain, making them fully transparent.

DAOs can, in essence, be thought of as a collective of people in pursuit of some common goal – which could be just about anything – who are trying to do for organisations what Bitcoin can do for money: provide resilient, decentralised systems of governance which do not require centralised authority to achieve consensus; are ‘trustless’ (minimising the trust required of any single actor in the system and resilient to a minority of bad actors); and can function largely autonomously. One good analogy of how a DAO works is as follows:

Imagine a vending machine that not only takes money from you and gives you a snack in return but also uses that money to automatically re-order the goods. This machine also orders cleaning services and pays its rent all by itself. Moreover, as you put money into that machine, you and its other users have a say in what snacks it will order and how often should it be cleaned. It has no managers, all of those processes were pre-written into code.

Though this vending machine DAO does not really exist (yet), it illustrates how many organisational processes – such as reordering stock, requesting cleaning services, paying rent – are relatively routine and could potentially be automated.

But what about organisational processes which cannot be codified? In the above example, how would the DAO decide which cleaning service provider to use or determine whether the cleaner was doing a good job? Aren’t most organisations considerably more complex than vending machines, making countless strategic decisions that are fundamentally impossible to codify?

Clearly, there are many functions that can only be performed by people, not by the code itself. Where human decisions are needed, such decisions may be broadly divided into ‘on-chain’ and ‘off-chain’ governance.

With ‘on-chain’ governance, decisions are made through the DAO; in the example above, every user of the vending machine might receive a token which allows them a vote on the choice of what the machine dispenses and how often it should be cleaned (perhaps informed by how this might change prices). This ‘on-chain’ governance could potentially be broadened so that users could also nominate cleaners, vote on those nominations, be paid to verify that the machine has been cleaned, and so on. It could also be used to hire other (human) contractors, such as repair engineers, manage (human) verification of contractors’ work and ensure swift payment.

However, to stick with the example above, if the original code did not include the facility to propose new cleaners or new features, how would that be introduced? This is a matter of ‘off-chain’ governance, where humans are operating outside the DAO. This ‘off-chain’ governance may or may not be decentralised: for instance, the community which is developing the cryptocurrency Decred uses a blockchain-based public proposal system called Politeia for its off-chain governance, as do numerous other systems.

To date, many DAOs have focused on providing a mechanism for raising and distributing funding for open-source software projects. However, they could be used to manage a broad range of projects that involve people working together towards a common goal, be that scientists working on a climate initiative, artists on a film project or journalists on a collaborative media network. With a growing number of organisations – such as DAOstack, Colony and Aragon – now developing tools for building DAOs, we expect to see a proliferation of this model in the next few years. 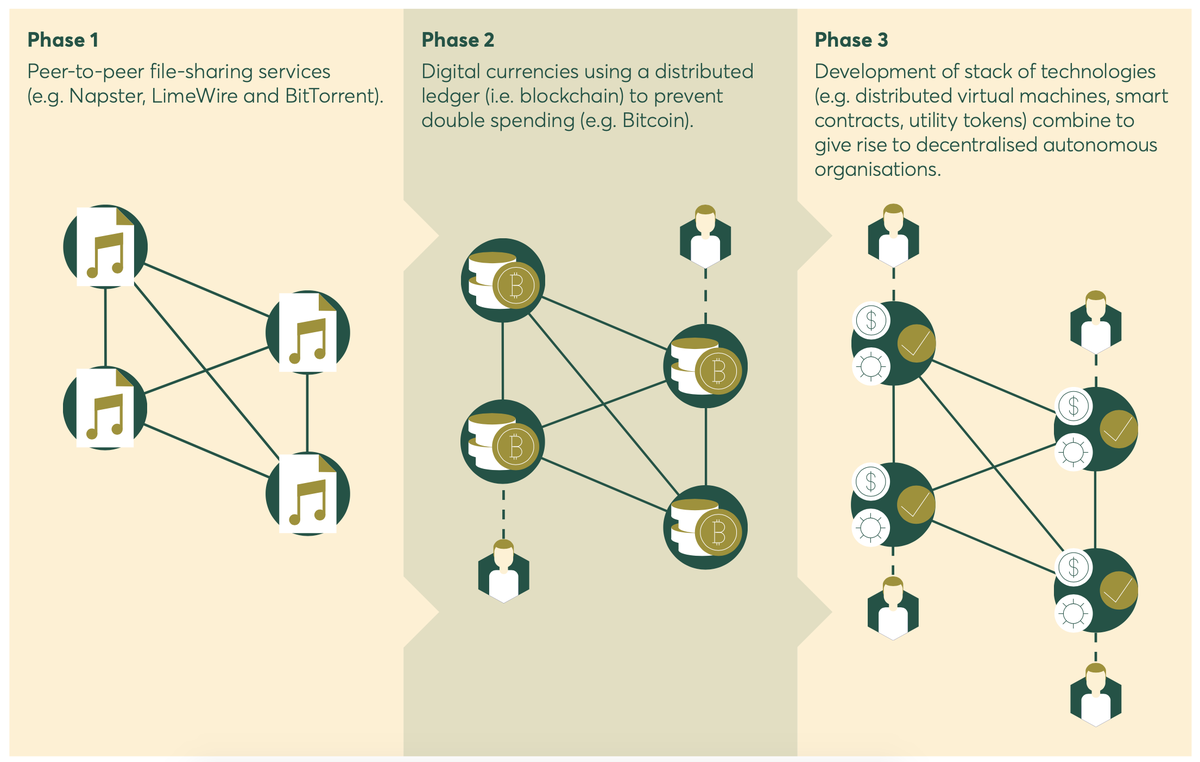 Previous section: What is the blockchain? Next section: Tokens and tokenomics