GoodGym, which combines exercise with doing good, has created a strong business model to support its growth across the UK.
07 August 2018
2 min read
Share this

GoodGym founder Ivo Gormley thinks time and energy spent lifting weights or running on a treadmill could be put to much better use - by doing good in the community. And for the past seven years, he’s been on a mission to help people do just that.

GoodGym combines exercise with doing good in three ways: volunteers can sign up for group runs to complete a community activity, like gardening or painting; runners can do one-off ‘missions’ for older people, like buying groceries or changing a light bulb, or members can commit to a weekly run to visit an older person (who becomes their ‘coach’ and motivation) for a cup of tea and a chat once a week.

In early 2014, GoodGym was operating in nine areas in the UK. The organisation was awarded £245,000 through the Centre for Social Action Innovation Fund (CSAIF) to support its expansion into new areas. Since then, GoodGym has grown rapidly, doubling in size year-on-year and involving more than 3,000 runners in volunteering. In 2014, GoodGym supported 349 older people. Today, that figure has risen to more than 1,180 and by 2018, it’s on track to support 29,645.

In particular, part of the CSAIF funding was used to improve the online platform, creating a space where new runners can sign up, existing runners can log their progress, and those interested in GoodGym can express their interest in setting up the service in their area, if it isn’t there already. 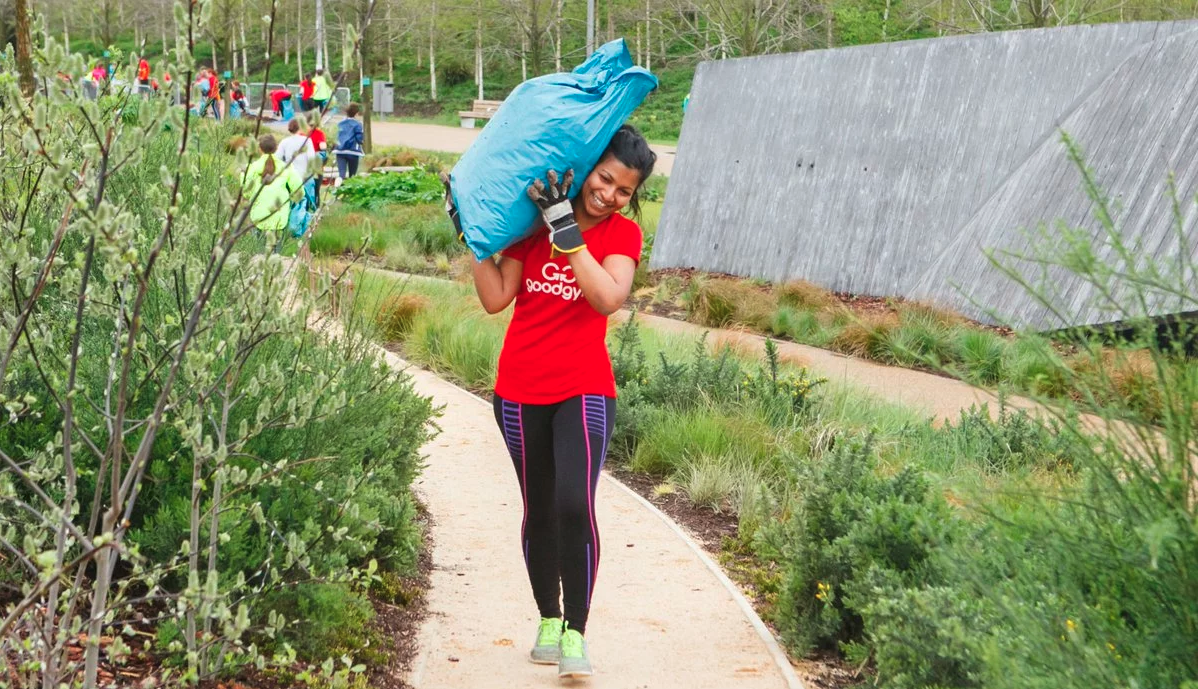 GoodGym runner helps to clean up a community space

This interest from aspiring members has helped unlock new funding sources. Thanks to the many positive outcomes GoodGym can achieve for local communities (boosting the health and wellbeing of runners and older people, as well as helping to maintain public spaces), the service is now being commissioned by local authorities and the NHS, which pay a one-off fee of around £25,000 to get the service up and running.

After this, the idea is for each local site to become self-sustaining. While the team was originally against accepting donations from runners, this was later introduced following requests from members themselves. After doing some testing to find an amount that would work for all, GoodGym now recommends a voluntary donation of £9.95 a month (still far cheaper than the gym).

Corporate partnerships are also part of the mix. Apparel company New Balance provides t-shirts for all runners and also partnered with GoodGym on a series of TV ads on ‘using running for good’. Meanwhile, a recent partnership with parkrun has the potential to introduce GoodGym to a whole new audience of fitness enthusiasts, with the aim of supporting 60,000 older people by 2020.

Moving forward, GoodGym is one of eight promising innovations being supported through the Accelerating Ideas Fund, a partnership between Nesta and the Big Lottery Fund to support ideas with the potential to transform the lives of older people.

GoodGym’s willingness to experiment and evolve has built a strong foundation for growth, and the service now aims to launch in every major UK city by 2018.

GoodGym was one of 52 organisations backed by the Centre for Social Action Innovation Fund, a £14.5m fund designed to increase volunteering and social action. The fund supported organisations with brilliant ideas to mobilise more people to give their time and energy to help others, working alongside public services. GoodGym was previously supported through the Innovation in Giving fund to support its early expansion.