It’s about 18 months since What Works was launched, and a good moment to take stock. A new report to promote findings to date, launched at the Institute for Government, updates us on progress so far. The centres have now bedded down, and are formally either up and running, or have secured funding promises. And there’s also the little matter of a General Election being only six months away.

The UK’s What Works Centres have come a long way. In a relatively short space of time, these ‘evidence centres for social policy’ have grown to nine institutions, covering areas like crime, education and wellbeing. Yet it only seems like yesterday when there was a flurry of planning meetings, roundtables, blogs and reports with the Cabinet Office, ESRC, Nesta, and the Big Lottery Fund to kick-start the idea.

A new report to promote findings to date, launched at the Institute for Government, updates us on progress so far. It’s about 18 months since What Works was launched, and a good moment to take stock. The centres have now bedded down, and are formally either up and running, or have secured funding promises. And there’s also the little matter of a General Election being only six months away. 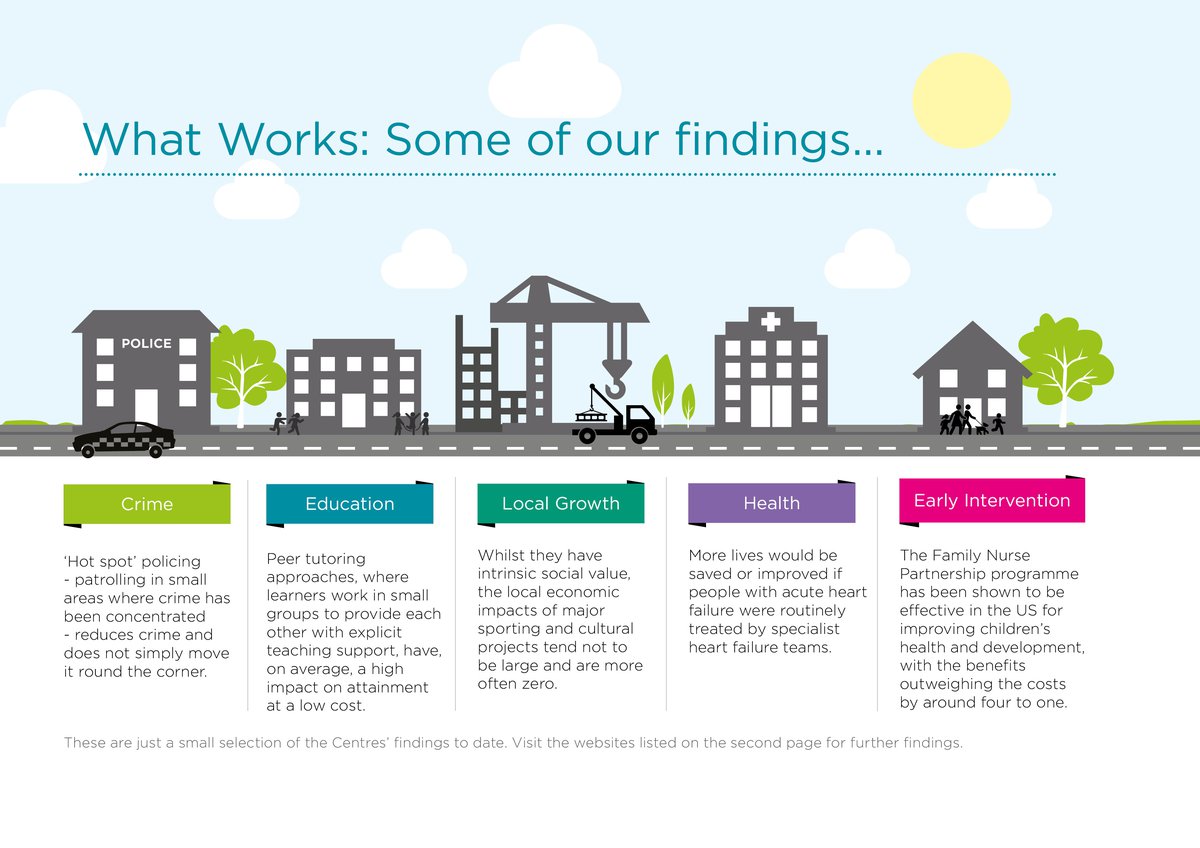 Image taken from the What works? Evidence for decision makers report

The new kids on the block

We started with six[1] centres announced at an event at Nesta back in March 2013. The network of organizations has continued to grow. There are associate members in Scotland and Wales. What Works Scotland will be zeroing in on local public services and Community Planning Partnerships, with case studies in Aberdeenshire, Fife, Glasgow and West Dunbartonshire. The Public Policy Institute for Wales will be working directly with Welsh Ministers, briefing them and ‘identifying their evidence needs’, and providing a bridge of knowledge with the rest of the UK.

Just last month we also saw the launch in Bristol and London of the What Works Centre for Wellbeing. Funded to the tune of £3.5m over three years, the Centre will be a hub/spoke model, comprising a central, strategic function, perhaps run as a social enterprise, alongside four ‘evidence synthesis programmes’, on areas such as work and learning, and culture and sport. If you are interested in bidding, you have until 21 January 2015 to submit proposals.

As well as the new institutions, we also got a ‘What Works National Adviser’ in the form of Dr. David Halpern (he shares a Nesta office in London with us, although only when he’s wearing his Behavioural Insights Team CEO hat). Some in academia are still pushing to create another role: a Chief Social Science Adviser in Government, although such campaigning has gone quiet of late, perhaps because of Halpern’s impact in Whitehall.

A diverse mix of players

What was hard to predict at the start was the range of different centres. One of the early ideas, trailed by the Cabinet Secretary Sir Jeremy Heywood was to have a single overarching body, like NICE. But instead of one uber-body, we have a collection of sizes and sectors. The remit of the Centres varies, and they include charities, university centres and arms-length bodies. In some ways this diversity offers a sort of natural experiment: can we learn from these different approaches?

Even the funders are broad. In the case of the wellbeing centre, no less than 16 bodies have provided money or in-kind support. One key common denominator, however, has been the Economic and Social Research Council. It has provided critical funding, as well as leadership in making the things take off, next to the What Works Team in Cabinet Office and others like the Big Lottery Fund.

We can also learn from the past. Let’s not forget that we have been here before, in the form of the UK centres for evidence-based policy and practice set up over a decade ago. There was some good work emanating from that past evidence push. We asked one of its key players to blog for us on lessons learnt from the now wound-up What Works for Children a partnership between Barnardo’s, City University, and the University of York. Funding was, however, stopped for these centres. Speaking informally to people involved, a key lesson was that these old centres were too distant from government.

This will not be a mistake of the current What Works Network. The evidence they produce must be adopted, and so it must be relevant to decision-makers in government – as well as frontline professionals. What Works has statements of support from chief executives of local authorities, commissioners of public services, head teachers, police officers and others.

There is also ministerial backing: Oliver Letwin at Cabinet Office, Danny Alexander at HM Treasury. They launched the centres, and have prefaced the new report. Others who have fronted the centres in public include Kris Hopkins (Minister for Local Growth), and Michael Fallon, Business Minister. On the launch day, Tory Party Chairman Grant Shapps was on BBC World at One to lend his support. Outside of Whitehall, John Swinney, Deputy First Minister of Scotland launched What Works Scotland. We hope that shadow ministers in Labour would be supportive if in power in 2015; Liam Byrne, Shadow Minister for Business, Innovation and Skills, has already expressed his support.

This closeness to government is vital for relevance. But we also need to maintain independence, to avoid charges of ‘policy-based evidence’, biasing the evidence to political needs. “Some of this work may not be pleasing to all ears: sometimes, evidence does not necessarily support policies already in place” said Paul Boyle, former CEO of ESRC in a Guardian blog.

Our report on lessons learnt overseas in places like the US, Germany, Australia, and the Netherlands found that independence is crucial for success. It doesn’t matter if you are even housed within government, as long as you have a fierce culture of impartiality and detachment from political meddling.

And will we see new centres in the future? Probably not just right now. Nine is about enough, at least for the time being (although strictly there’s seven, not nine, as What Works Scotland and the Public Policy Institute for Wales are ‘associate members’). The report says future priorities will be training of civil servants, ‘wider and deeper coverage’ of existing centres, and greater internationalisation. An important challenge will be fostering demand for the supply of evidence, a priority for the Alliance for Useful Evidence.

But there’s real momentum here. And others want a piece of the action. There was a call this week for a what works-type centre on local public services by the government-commissioned Service Transformation Challenge Panel. The Department for Works and Pensions is also exploring a more internal what works centre. Who knows what we will see in 2015. And there is, come to think of it, a satisfying roundedness about the number 10.

[1] Admittedly two of these were quite long in the tooth already: NICE was set up in 1999 and the Education Endowment Foundation in 2011, but they were welcomed into the fold as they perfectly fitted the ideal of creating – and implementing - evidence.