The Conservative Party released their manifesto this morning – here, we use the Political Futures Tracker to provide a bite sized summary of top themes. We tell you what sentiment the Conservatives are expressing about these themes and how future thinking they are about most mentioned big issues.

The Conservatives' top theme is the UK economy, with nearly three times the number of mentions throughout their manifesto than the second most popular theme - Tax.

On Tax the Conservatives make three major policy statements in the manifesto. 1) Personal income tax allowance would be raised to £12,500 and a £50,000 threshold for 40p rate by 2020 introduced. 2) They would also link the minimum wage to the personal income tax allowance so no one on the minimum wage would pay income tax. Finally, 3) Inheritance tax would be removed on properties worth up to £1 million, to 'remove millions of middle-income families from the threat of the levy.' 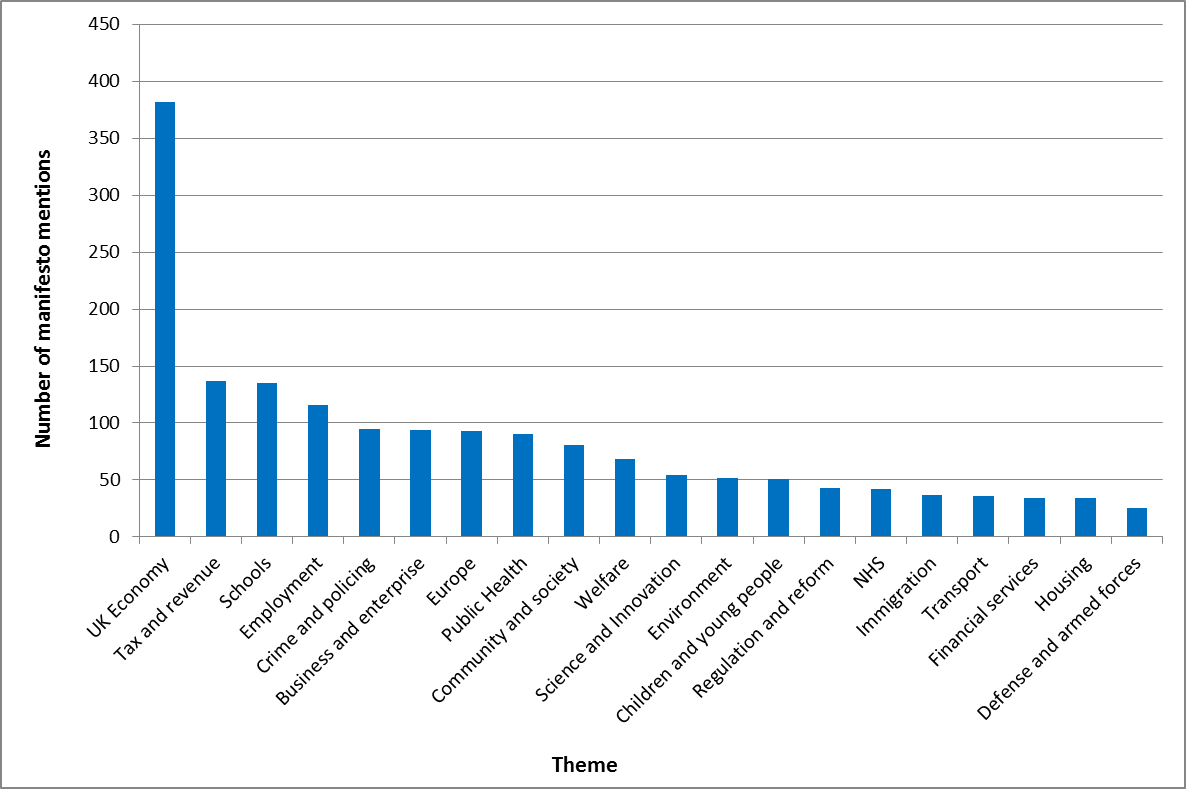 The NHS comes in at number 15 and Immigration at 16 in the top 20 themes, far more emphasis is placed on Schools, Employment and Science and Innovation...

The Conservatives are the only party to feature Science and Innovation in their top 20 themes from the manifestos analysed so far.

We can see that Tax and Schools feature heavily in sub theme mentions, reflecting trends in the themes above. But the EU is also mentioned very frequently, though we see that Europe is only 7th in the Conservatives' top themes chart.

On Europe the Conservatives pledge an In/Out referendum on UK’s EU membership by end of 2017 and introduction of a British bill of rights, scrapping the Human Rights Act. 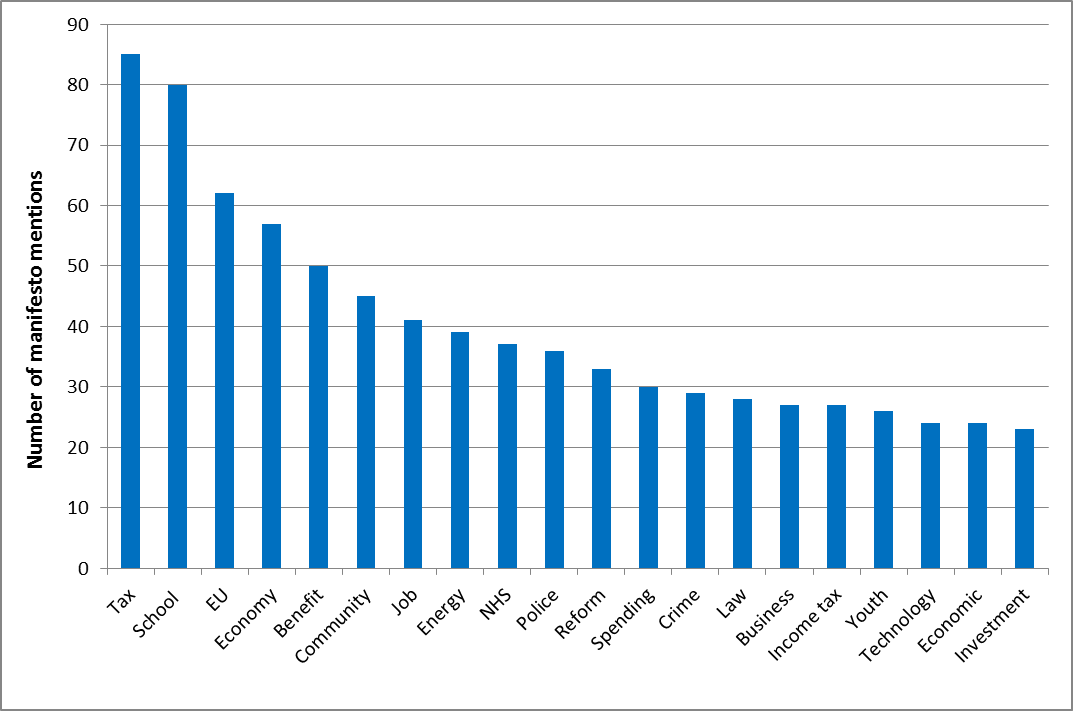 The Conservatives mention the Environment in an overwhelmingly positive way in their manifesto - they suggest policy to enable protection of the countryside, Green Belt and urban environment, and development of new infrastructure in an environmentally-sensitive way.

Food and farming and Rural and countryside make it into the top 20 themes with associated sentiment, and are mentioned positively - perhaps to appeal to rural voters? 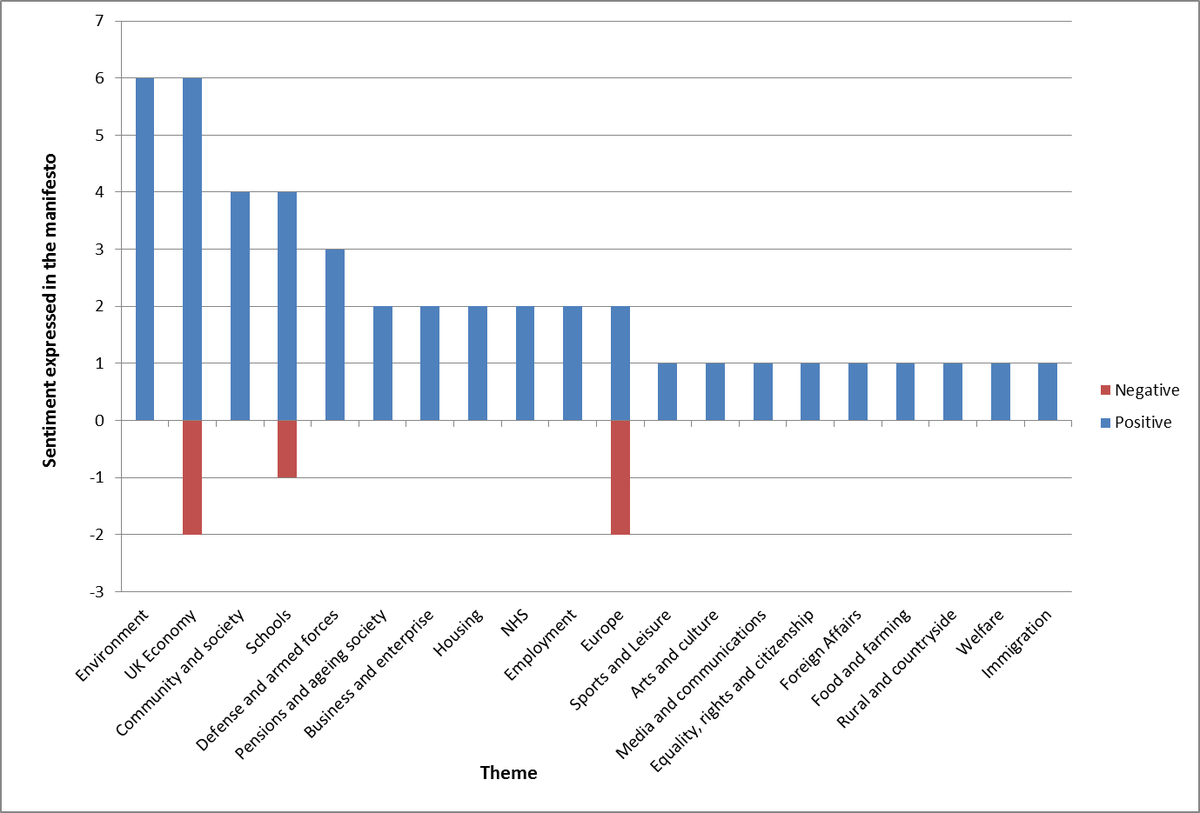 On Defense, we see very positive associated, where the Conservatives pledge to 1) maintain the size of the regular armed services and not reduce army personnel numbers below 82,000, 2) Retain the Trident nuclear weapons programme and build a new fleet of four Successor ballistic missile submarines and 3) Outlaw groups that foment hate with the introduction of banning orders for extremist organisations.

The Conservatives are most future thinking about the UK Economy

Many of the themes that we have seen emerging over the past months are recurring in the top future thinking chart - such as Business and enterprise, Tax, and Europe. But we also see Children and young people, Schools and Higher Education featuring heavily in the top 20, which we often see mentioned in a future context. 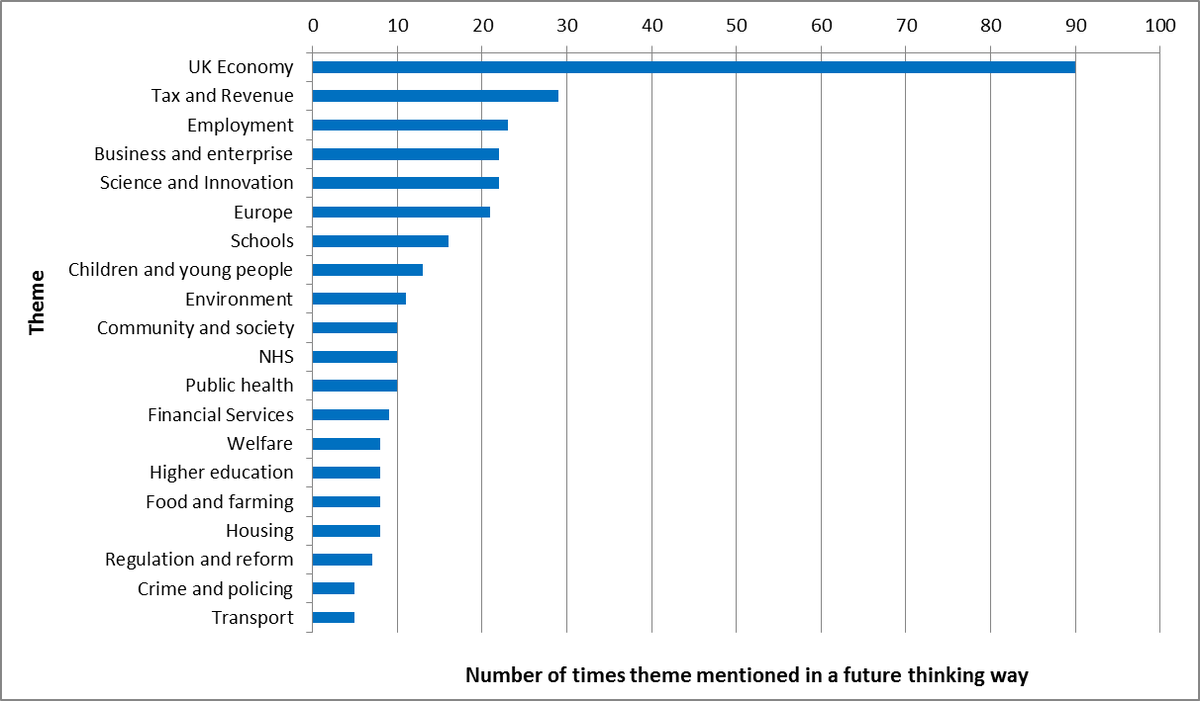