In the first data pilot for Arloesiadur, our project to develop an innovation data analytics platform for Welsh government, we have started to map research networks in Wales using data obtained from the Gateway to Research data, a repository of information about Research Council and Innovate UK funded projects.

In the first data pilot for Arloesiadur, our project to develop an innovation data analytics platform for Welsh government, we have started to map research networks in Wales using data from the Gateway to Research, a repository of information about Research Council and Innovate UK funded projects.

The potential policy relevance of this dataset is clear. Universities are a critical component of innovation systems that also include businesses and government – the famous “triple helix” idea. In addition to creating new knowledge and highly educated graduates, they also connect government and industry. With a better understanding of university networks, policymakers can put in place effective initiatives to support them.

Some burning questions include:

We begin exploring some of these topics in this blog. Before we get started, it is worth noting that this analysis is preliminary. The data pilots we are running until Autumn have the primary goal of exploring different datasets, the methods to analyse them, and the formats to communicate findings. We will use what we learn when we start building Arloesiadur in the Autumn. If you have any feedback or ideas, leave a comment below or send us an email at [email protected]. The code we have used to collect, analyse and visualise the data is available on GitHub.

Gateway to Research is a web portal and database with comprehensive information about research projects from the UK's seven research councils as well as Innovate UK, including:

The approach we have used to classify research topics into broader research domains (e.g. following the example above, to put "Artificial Intelligence” into Mathematics and Computing, or “Criminal Law and Criminology” into Social Sciences) is available at our GitHub repository.

In the rest of this blog, we present some preliminary findings from an initial exploration of the disciplines that Welsh universities specialise on, levels of collaboration across disciplines compared to the UK, and the geography and structure of research collaboration networks in different disciplines.

In what research domains do different areas of Wales specialise?

The heatmap suggests that Wales has hotspots of research activity in all the “grand challenge areas” identified in its innovation strategy, including:

Several Welsh regions show high levels of activity in other academic disciplines like Social Sciences in Cardiff, or Arts and Humanities in Rhondda Cynon Taf (where the University of South Wales has two campuses).

What are the levels of collaboration across research domains?

Collaborating inside research disciplines makes it possible to specialise and accumulate knowledge. At the same time, combining ideas from different disciplines generates innovation. How to strike the right balance between both? This is another area of interest for policymakers that we can analyse with our data.

The heatmap below shows the levels of “discipline mixing’ in Wales compared to Britain. The basic idea is to compare the probability of finding organisations working in projects including research topics in the same research domain (the diagonal of the heatmap) or from different domains (off diagonal) in Wales with what happens elsewhere in Britain. As in the previous heatmap, warmer colours indicate that the levels of collaboration for a combination of disciplines are higher in Wales than in the UK.

The heatmap suggests that, in domain areas such as “Environmental Sciences”, “Physics” and “Mathematics and Computing”, Welsh organisations display a stronger propensity to participate in projects involving collaboration inside the same discipline. 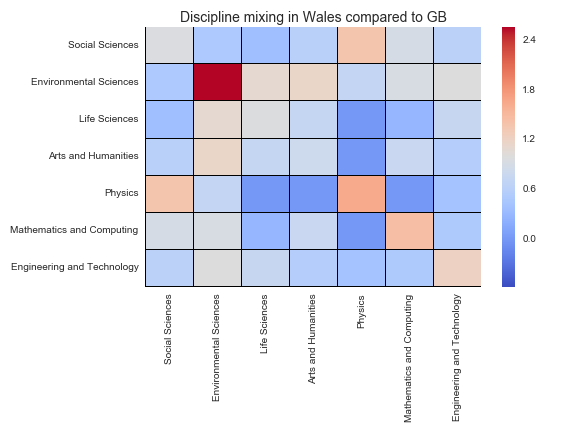 The geographic span of Welsh research networks in Great Britain

The interactive map above shows our preliminary analysis of the geographic scope of collaboration involving Welsh universities (1). The colour of each local authority district reflects the number of collaborative projects in the GtR data that the selected university has been involved with in that district (2).

Our initial exploration shows that Cardiff University has the highest levels of collaboration across the UK of any of the Welsh universities, with 1,050 collaborative projects having taken place across 151 districts. Swansea has the second highest count with 556 projects across 130 districts.

It’s difficult to draw a distinct difference in geographic pattern between the universities. For obvious reasons, Cardiff and Swansea both collaborate strongly along the M4 corridor. Similarly, Bangor has collaborations stretching across the north of England and Aberystwyth has projects covering much of mid and west Wales.

The structure of Welsh research networks

Finally, we have started looking at the structure of Welsh research collaboration networks. How well connected are these networks? Who are the key players? Answering those questions can help policymakers assess the need for interventions to strengthen networks, and determine where to target them.

In these collaboration networks, the nodes represent organisations in the GTR data that participate in a project where there is at least one Welsh organisation. The links between them represent collaborative research projects. Each project has been allocated to a research domain, which makes it possible for us to look at different research domains separately.

In the case of Environmental Sciences, there is a larger connected component involving collaborations between universities in Cardiff and public sector organisations including Welsh Government, Welsh Water or Countryside Council for Wales. The Mathematics and Computing network has a cluster of collaboration between Swansea University and several digital businesses. Interestingly, the BBC seems to play a connecting role, participating in two research projects involving Welsh-based organisations in different parts of the network. The Social Sciences network is somewhat less well connected: when we consider the network of Wales-based organisations, only a third of them participate in its largest component (compared with 48% of organisations in the Environmental Sciences network, and 43% in the Mathematics and Computing network).

As we said at the beginning, this is an initial exploration of the data, but we feel we are only starting to scratch the surface. Other options we have not yet pursued include looking at individual researcher data, measuring research outputs, mapping international collaboration networks, tracking the evolution of collaboration over time, and benchmarking networks in Wales with other parts of the UK, for which we also have data. We can also perform more finely grained clustering analyses of research topics or abstracts to identify detailed research specialisations that may be of interest for technology foresight.

We are also planning to create maps of research networks allowing users to explore them interactively. We will also use the list of businesses that we have identified in this pilot as an input in other data pilots, including one where we will draw on different measures of innovative behaviour to find innovative businesses and entrepreneurs in Wales.

We will keep you posted on what we find.

The local authority district boundaries are based on TopoJSON data provided by Dr Martin Chorley of Cardiff University.

1. To produce the resulting map we geocoded the organisations within the GtR database, using their postcodes and address strings to get approximate latitude and longitude coordinates. We used these to place each organisation into a specific local authority area, allowing us to count the number of projects each Welsh university participated in, in each district. All of our methods are available on GitHub,) and a fuller methodology is available in the companion blog post

2. These won't all be academic projects, as the database also contains data about companies that have been involved in research and development, collaborative work, Knowledge Transfer Partnerships or Innovate UK funded projects.

Part of
Arloesiadur: An innovation dashboard for Wales 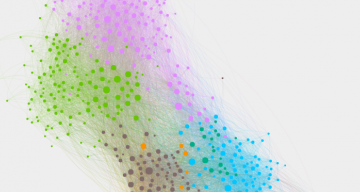 This is the first in a series of data blogs documenting our exploration of potential data sources for Arloesiadur, the innovation analytics platform we are developing for Welsh Government.
Blog
31 May 2016