Louise was Director of Innovation Policy and Futures within the Policy and Research team. She managed Nesta's work on innovation policy and technology futures. She previously worked on…

Those reading the tea leaves to predict the contents of today's 'Emergency' summer budget have a great deal to go on. When it comes to innovation, the bingo card should include the phrase 'Northern Powerhouse', some one-off science capital spending, as we saw in the creation of the Graphene Institute, and a mention of innovation and science powering future growth.

While few in the world of innovation and science policy would want to knock the Chancellor for his enthusiasm for science and tech, the announcements that have been made of 'investments' in innovation over the past several years really don't match the scale of the challenge.

The UK lags significantly behind our international competitors when it comes to spending on research and development. Businesses, universities and the government together spend around 1.6% of GDP on R&D. This is a long way short of the 2.8% spent in the U.S. and Germany, and 2.2% in France, not to mention an agreed European target of 3%. 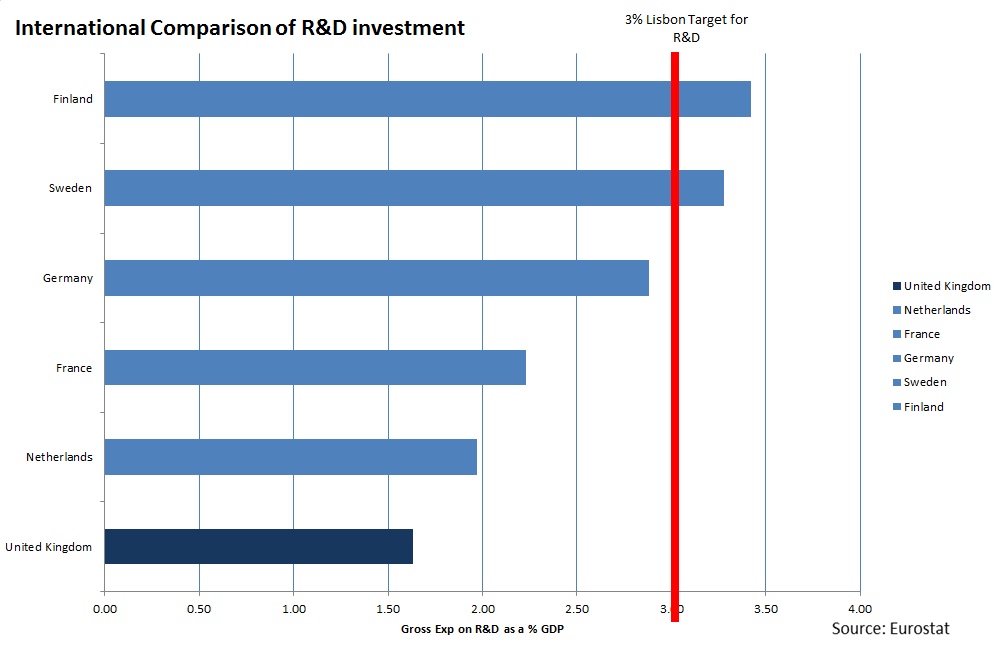 We're not the first to remark on this - it's been a persistent gap for many years. Part of the gap could be explained by our industrial mix (although it still implies a lack of innovation-intensive industries), and the fact that many types of innovation that the British excel at, like design, aren't well captured by R&D figures. But the gap is sufficiently large and consistent that it is hard to wholly dismiss. We simply don't invest to the level of our international peers in one of the things that should make us distinctive: science and innovation.

The gap in investment is now vast - it would take more than £20bn of additional investment to help us close it. Not all of this need necessarily come from government, but government investment, when well targeted, can stimulate business investment. BIS economist Tera Allas agrees. In her report for BIS, benchmarking the UK's Innovation system to others around the world, she says we have seen "a sustained, long-term pattern of under-investment in public and private research and development (R&D) and publicly funded innovation" in the UK and that "public sector expenditure may need to rise more sharply in the short to medium term".

If The Chancellor is serious about his Northern powerhouse, he needs to do three things: 1) invest in innovation at a much larger scale; 2) focus that investment on the sort of development and commercialisation spending that is most closely linked to business investment; and 3) look beyond R&D to areas like design and digital skills that are critical for innovation in UK strengths like creative industries.

First, the scale that is needed is in the billions rather than millions. For instance, to bring the North West up to 3% investment in R&D, as you might expect for an innovation-intensive economy, our calculations suggest an investment of more than £2bn is needed. 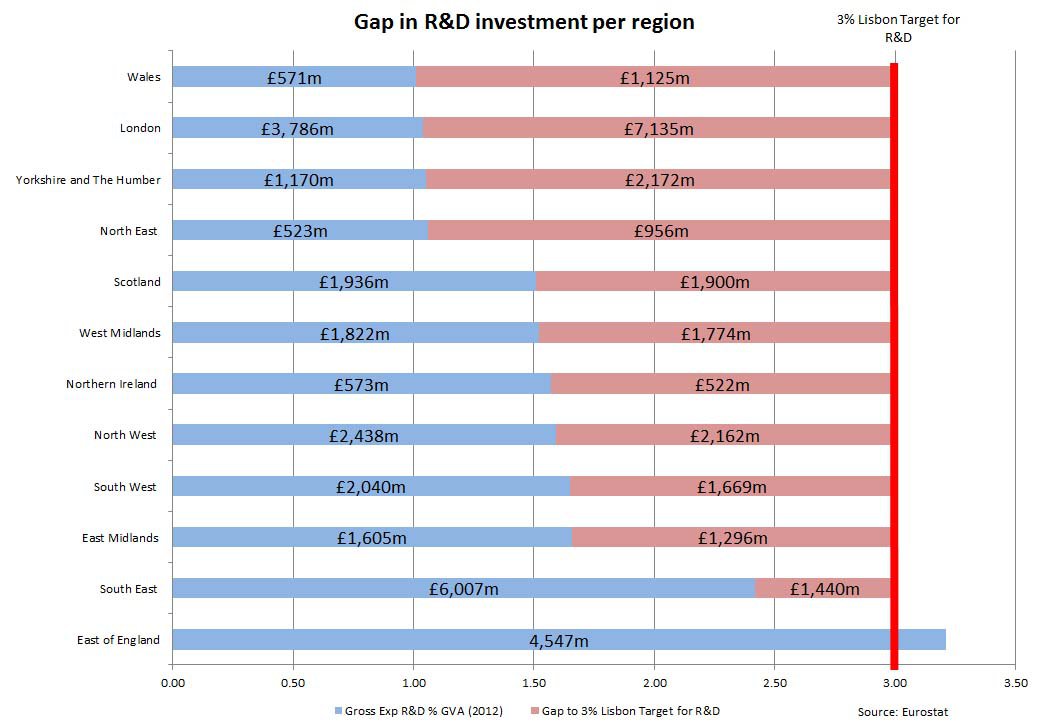 Second, while the North appears to lose out in government R&D spending (as Tom Forth has shown), a large component of this is higher education spending, which is highly concentrated, as you might expect from a funding system that distributes funding according to previous excellence. Innovate UK funding, which primarily funds businessses, is more evenly distributed, but it is at a much smaller scale than the university pot. This is where the Chancellor will need to focus investment if he is to stimulate the business R&D spending that could really create an innovation-driven Northern powerhouse, fit for the industries of the future. While universities are important elements of the innovation system, only 2% of innovating businesses cite them as a direct source of innovation knowledge.

Third, while R&D is a well-measured figure, for sectors like the creative economy it doesn't really capture all the activities that support innovation. Arts organisations also need to invest in R&D. Support for the arts to explore new models of audience engagement, operating models or new missions which may give rise to new forms of cultural value is lacking. There are potentially very big payoffs to the UK from this kind of funding, just as there are to R&D in other fields. And for creative hubs like Leeds and Manchester, investing in design and the arts is a critical piece of the innovation system.

So let's hope that the Chancellor wants to get serious about fuelling the Northern Powerhouse, supporting the innovation and creativity that powers 21st Century industries.

Photo by Samson Duborg-Rankin on Unsplash

Louise was Director of Innovation Policy and Futures within the Policy and Research team. She managed Nesta's work on innovation policy and technology futures. She previously worked on…