Corruption is still a blight across Europe, as we are reminded by periodic scandals like the UK MPs’ expenses scandal in 2009 or, more recently, the Bárcenas Affair in Spain, to name only two.

Indeed, Transparency International’s report People and Corruption: Europe and Central Asia found that one in three people in the region believe corruption to be one of the biggest issues facing their country; that over half think their governments are doing a “bad job” of fighting corruption in the public sector; and that a third think government officials and lawmakers are mostly or entirely corrupt. 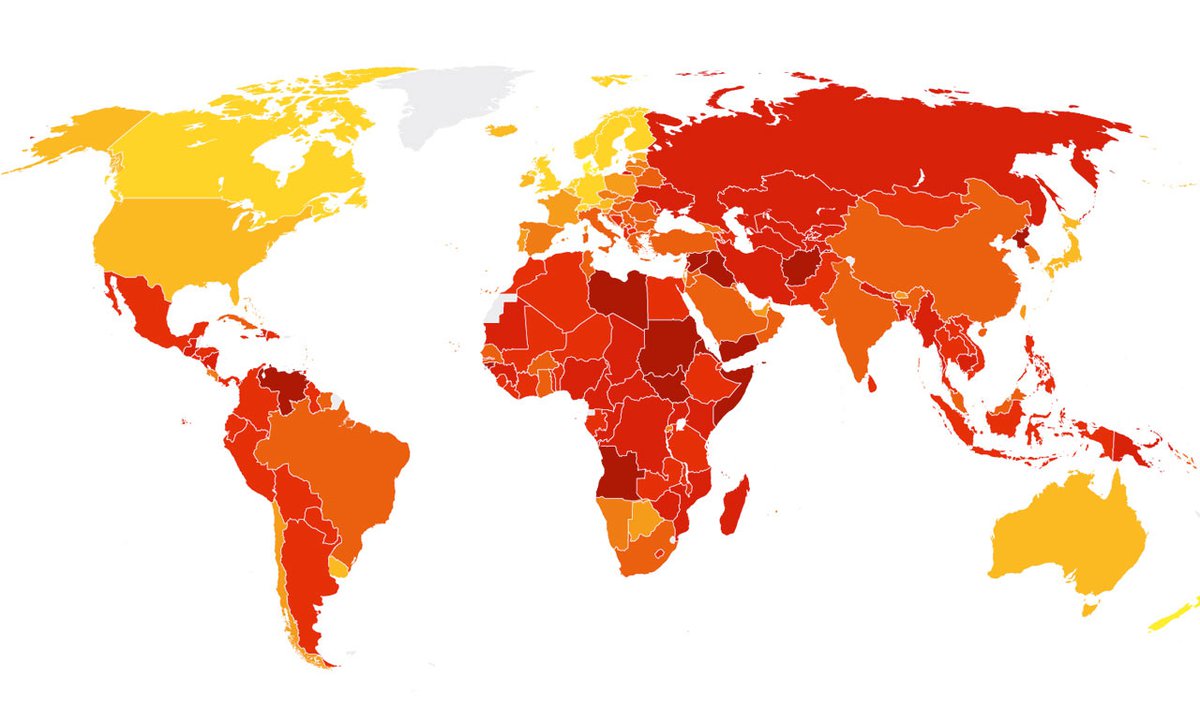 At the same time, it’s just as important that there is more transparency about how legitimate decisions are made within institutions, how taxpayers’ money is being spent, how public services are performing, where companies are storing their money and paying tax, and what charities are doing with the donations they receive.

We have made progress in recent years, through policy moves (such as freedom of information acts and opening up datasets), non-profits’ work (such as by Open Knowledge International and Transparency International), and alongside international initiatives (such as the Open Government Partnership). But we still have a long way to go.

Alongside campaigning, policy and research work, we have seen huge growth in the number of projects across Europe using the power of people and technology to make government, corporates and civil society more transparent and more accountable. Here are five of them.

ProZorro is an e-procurement platform that was started by volunteers in Ukraine after the Euromaidan revolution to try and bring more transparency to public procurement and reduce corruption. ProZorro digitises and opens up information about public tenders so that anyone can see them - not just bidders, but also journalists, civil society, citizens and charities. It also offers tools for analysis and complaints, guides, and training modules. Within a month of first being deployed, the Ukrainian government invited ProZorro’s founders to join the national government’s procurement department, and only two years later it is now a legal obligation for all public bodies in Ukraine to use ProZorro for procurement. As of April 2017, 764,000 tenders worth €19 billion had been awarded through ProZorro, saving €800 million, while it’s estimated that the number of bids per tender has increased by 15 per cent and that the number of unique government suppliers has risen by 45 per cent.

ProZorro is profiled more extensively in the final DSI4EU report, What next for digital social innovation? Realising the potential of people and technology to tackle social challenges (pp.53-54).

mySociety has been one of the leading organisations in the field of “civic tech” for over a decade. It has developed a range of tools to help citizens hold the powerful to account and communicate with them, such as FixMyStreet (which allows people to report problems in their local area to local authorities), WhatDoTheyKnow (a platform for submitting Freedom of Information requests), WriteToThem (a platform for writing to elected members of Parliament), TheyWorkForYou (a platform for finding politicians’ voting records and statements) and EveryPolitician (which aims to collect and store information about every parliamentarian in every country, past and present). Because mySociety’s tools are all open-source, they have been deployed all over the world; there are now over 70 international sites in 44 countries running mySociety code. 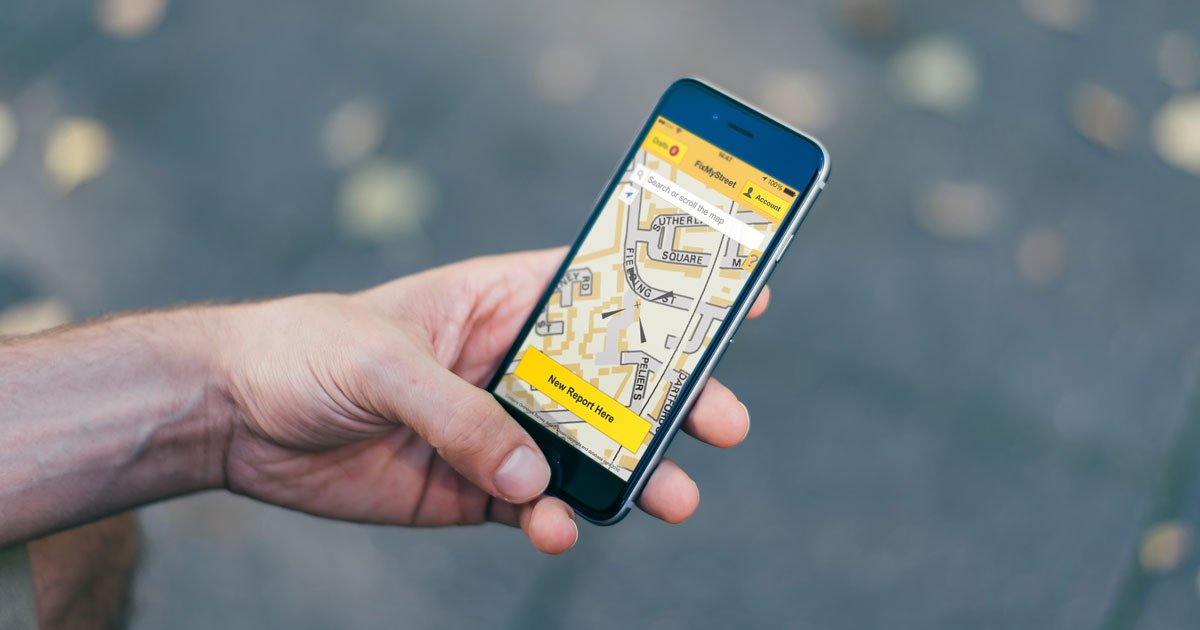 FixMyStreet allows users to photograph and report problems in their communities directly to the local authority. mySociety is profiled more extensively in the final DSI4EU report, What next for digital social innovation? Realising the potential of people and technology to tackle social challenges (pp.86-87).

Zašto Ne: Opening politicians and government officials up to scrutiny (Bosnia and Herzegovina)

Zašto Ne (which means “Why Not” in Bosnian) is an organisation which empowers civil society and individuals to improve Bosnia and Herzegovina. Originally established as a youth peace organisation, its mission has since expanded into five programme areas. One of these focuses in particular on new technologies. This programme has developed a number of tools, including PravoDaZnam.ba, a portal for Freedom of Information (based upon mySociety’s tools); Istinomjer, which analyses politicians’ statements and promises and monitors whether they are fulfilled; and PopraviMiSkolu, which enables schoolchildren to report problems in their schools to authorities.

Open Corporates works to make information about companies more accessible, discoverable and usable, so that civil society, citizens and journalists can hold the corporate world to account and understand its workings better. This also allows people to expose and target issues like corruption, money laundering and organised crime. It is now the largest open database of companies in the world and shares data on corporate entities as open data under the share-alike attribution Open Database Licence, with data from over 100 jurisdictions about over 100 million companies. Open Corporates was also instrumental in getting the UK government to open its beneficial ownership database, a move which other countries are beginning to follow (this allows people to know who ultimately owns all companies), and is working with six other NGOs to create a global beneficial ownership register. Open Corporates has also been an important player in major journalism stories such as the Panama Papers in 2016 and exposing the Myanmar jade industry in 2015. 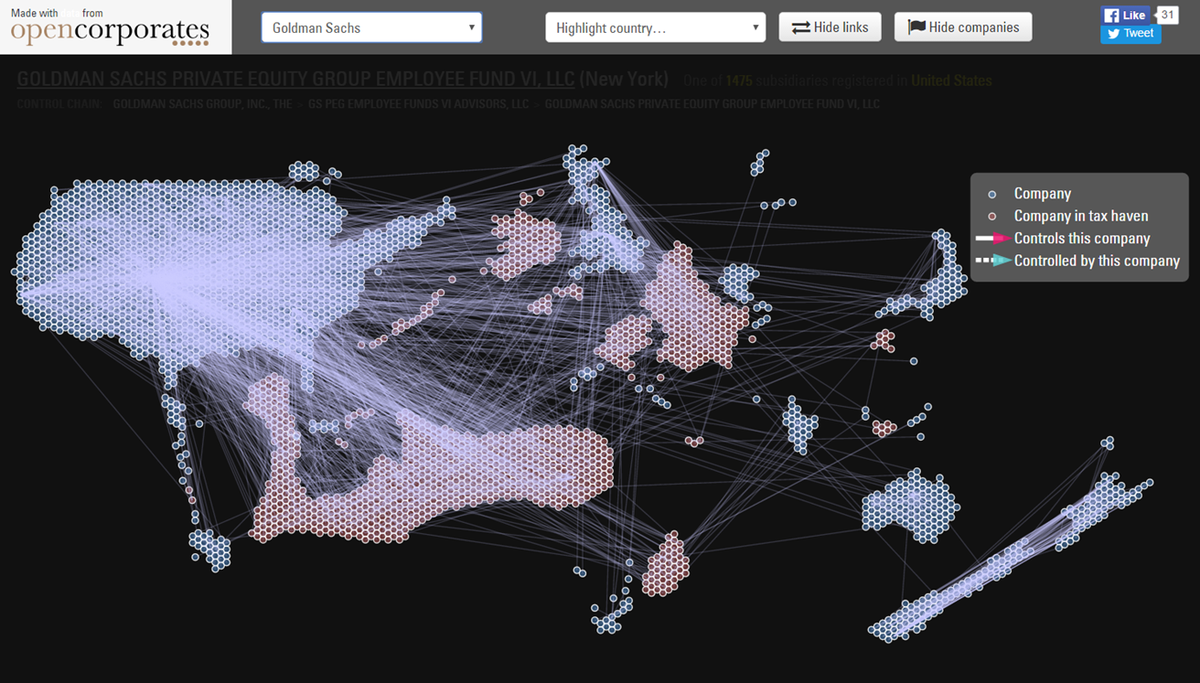 Open Corporates maps large companies' complex global networks. This is Goldman Sachs's web of companies; each dot represents one entity and its geographical location. Countries where Goldman Sachs have lots of registered entities include the Cayman Islands, Luxembourg and Ireland.