It was a privilege to attend the 2018 Innovation Growth Lab Conference (IGL2018) that took place at the Harvard Business School and MIT campuses from the 12-14 of June. The experience was — in a word — inspiring. The calibre of people and organisations in attendance as well as the quality of the work presented made it difficult to focus on one aspect to write about. However, one number kept coming back to me as I reflected on the experience — 118 years. In the field of innovation, such a time scale seems unfathomably long. So what is it referring to? 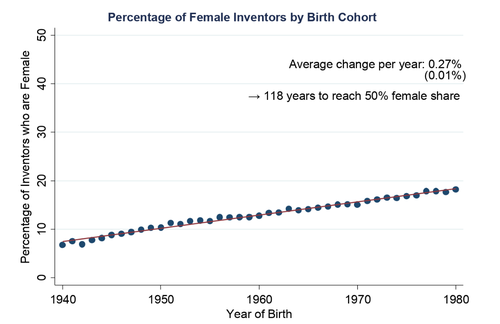 Source: Who becomes an inventor in America? Presented at IGL by John Van Reenen (slides)

The figure above shows one of the many fascinating (albeit somewhat disheartening) findings from The Equality of Opportunity Project, presented at IGL2018 by MIT’s Sloan School of Management Professor of Applied Economics, John Van Reenen. The trend line just barely shows an upward trajectory, reflecting an average rate of change of 0.27% per year in female inventorship (as measured by granted patents) starting from a 1940 birth cohort. At this rate, it will take 118 years to reach a 50% female share of inventorship. This is striking, and in the panel session that followed the presentation of these results, Nesta’s Executive Director of Research, Analysis and Policy Kirsten Bound emphasised that we must find a way to close the gap sooner.

The trend line just barely shows an upward trajectory, reflecting an average rate of change of 0.27% per year in female inventorship (as measured by granted patents) starting from a 1940 birth cohort. At this rate, it will take 118 years to reach a 50% female share of inventorship.

Against this backdrop, it was therefore highly encouraging to see several presentations at IGL2018 with either a central or peripheral focus on gender in research and innovation (R&I). Some findings I thought were particularly interesting include:

I was also encouraged to see a number of prominent women chairing and participating in panels and other sessions at the conference, including Kirsten Bound (Nesta), Eva Camerer (Innovation Norway), Katy Börner (Indiana University), and Sarah Weisberg (BioBus USA).

Gender equality in R&I: a backstory

Since 2014, the topic of gender equality in R&I has held a special place in my heart and mind. That was the year I started working on a two-year study for the European Commission’s Directorate General for R&I entitled She Figures 2015. The study is conducted every three years and examines the gender balance across the R&I landscape in Europe, spanning from the pool of graduate talent, to labour market participation of researchers, to R&I outputs.

It was here that I first learned of the ‘leaky pipeline’ in women’s research career progression — whereby despite a nearly equal proportion of men and women PhD graduates* across all fields of study combined in Europe, women ‘leak out’ of the academic career pipeline, holding only 21% of the highest level of academic positions** (2013 data). The situation is even more dire in science and engineering, where only 31% of PhD graduates and 13% of top academic posts were held by women in 2013. Rates of inventorship across the EU-28 were also grim, with only 8.9% of patent applications registered to a woman between 2010-2013.

There is clearly a great deal of work to be done if we want to see an equal representation of women and men in R&I, and an important part of the equation is ensuring that we have the right data to inform and evaluate policies and programmes.

Future directions in mapping gender equality in the R&I landscape?

Since joining Nesta’s Innovation Mapping team earlier this year, I’ve been reflecting on how the data and methods we use might contribute to furthering the study of gender equality in R&I. Below are two such ideas:

Where do you think the evidence gaps are in gender equality in R&I? How do you think we could apply novel innovation mapping techniques and leverage new types of data to explore these? Don’t hesitate to get in touch with questions, comments and ideas!

* ISCED 6 classification, which in most countries relates to a PhD.

** In most countries, tenured professorship

This blog was originally posted on the Innovation Growth Lab website on Tuesday 10 July 2018. You can read the original post here.

Chief Executive, Ravi Gurumurthy, on how Nesta will support the challenge finalists to scale their innovation projects

How do they feel about it?