In the fifth year of Nesta's predictions, it's worth asking what is the impact of this annual exercise. This is the first post in a series looking to answer this question.

Jessica was a principal researcher in the Policy and Research team. She explored how Nesta could best support responsible development of disruptive technology. She organised Hot Topics…

Lists of predictions are common at this time of year. And they are common because they are popular - perhaps even the inspiration for Buzzfeed’s all-year-round styling. Hidden behind the single rhetorical device, people are trying to get across a wide range of things. Sometimes they are selling gadgets, and other times they are trying to remind you how clever they are. Nesta’s predictions for the year ahead are, at their worst, guilty of looking like one of those lists. Although it’s more that we look like we’re trying to do both by selling clever ideas.

But our underlying motivation for publishing the list is well-defined. It is to provide an entry point to an organisation that covers an often confusingly broad array of areas and interests. The predictions highlight the funding programme we run and the research we produce. They are each a punt on the concrete changes that could come from work we do today.

The predictions aren’t really punditry, and certainly not in the purposefully contrarian and headline-hungry sense of the word. Putting them together is about holding ourselves to account in public. They force each member of staff that writes one to take their head out of the ground - to learn not to be an ostrich.

As an organisation, sometimes we comment on emerging trends and other times we are a funder of large public sector programmes. And so some of the predictions are about things we see and others about things we do. But behind all of them is an ambition to find new and more valuable ways of doing things. The predictions force us to explain what these new ways might look like. We are sharing Nesta’s vision of the future, rather than just responding to a world created by other people's visions. We don’t want to act like firemen, only engaging with the future when it looks like a fire needs putting out.

The trickiest balance that we have to strike is between the discipline of precise predictions and creating ambitious visions of the future. We may not be as precise as some argue is necessary for making good predictions. But this is in part to avoid spurious precision. Trend forecasters in, for example, the insurance industry need to assume a particular model of the future, even if that means simplifying huge uncertainties about how the world will and won’t change over time. Creating predictions that are precise for the sake of it would force us to ignore interesting uncertainties; acting like an insurance agent wouldn’t be a useful way of working either.

It is not by accident that I have chosen ostriches, firemen and insurance agents to explain what we’ve done well to avoid in our prediction series. An excellent 1996 paper on the misuse of a common foresight technique - scenario planning - explains common mistakes through these characters.

It’s nice to be able to look back and say that we’ve avoided some of the characteristics of bad futures practices. But in the fifth year of our annual exercise, it’s time to say more than that. Over the next month, I will publish a series of short posts trying to answer deeper questions about our predictions:

We’ve kicked off the background work to this already.

My colleague Katja Bego looked at the frequency of words across our first four years of predictions. ‘Public’ and ‘data’ come up a lot each year. Except in 2014, ‘social’ and ‘people’ seem to take the place of ‘public’. In 2015 ‘digital’ took over from ‘data’. A quick analysis of the 2016 predictions shows that ‘data’ is back on the rise.

Perhaps more telling is the frequent use of ‘will’, ‘can’ and ‘like’ every year, with ‘can’ gaining on ‘will’ for 2016. These terms betray our attitude to predictions: that sense of aspiration and action rather than passive commentary on potential future events.

I have started to categorise the predictions along three axes: (1) how involved the writer is in the thing they predict; (2) how much changed in the subsequent one or two years; and (3) the scale of the ambition of the change they predict. This is so far a hugely subjective assessment, and one I am looking to improve and analyse more thoroughly in the coming weeks. But for the moment here is a sketch of what a selection of predictions from 2012 to 2015 look like with scores of between 5 and minus 5 for (1) along the horizontal axis and (2) along the vertical axis. The size of the bubble represents the scale of ambition for that prediction. The colours show which year the prediction was meant to take place. 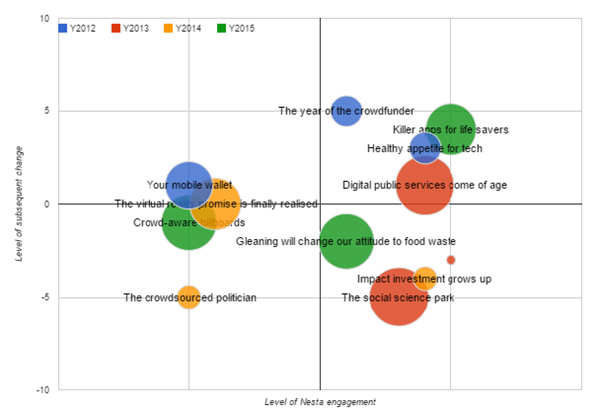 There are issues with this categorisation and this rough and ready presentation of it, not least that the title for each prediction doesn’t fully describe what is predicted. For this diagram to be more useful it will need to be linked to the original prediction text on our website. There is an unlabelled bubble for the commons for health knowledge, which won't change no matter what we do to the chart settings. It may also make more sense to put (2) and (3) on each axis, as we'd expect there to be a close relationship between the realisation of a prediction and the scale of its ambition. More ambitious predictions are often less likely to come true in the timeframe of a year or two.

I’ll be looking to improve on this as part of producing the series of posts on the list of questions above. If you have a view about what we should look at, what we should say or other questions we should be asking ourselves, please get in touch ([email protected]). Otherwise, keep an eye out for the posts and join us on 21 January to learn more about this year’s predictions.

Jessica was a principal researcher in the Policy and Research team. She explored how Nesta could best support responsible development of disruptive technology. She organised Hot Topics…