What does Scottish Government's Heat in Buildings Strategy signal about short-term carbon reduction from our homes?
18 October 2021
In A sustainable future
5 min read 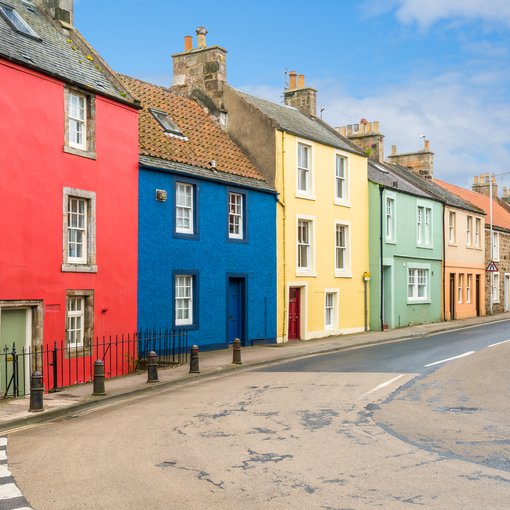 Earlier this month, Scottish Government released its Heat in Buildings Strategy: Achieving Net Zero Emissions in Scotland's Buildings, which details its plan for net zero emissions from our buildings by the legally binding deadline of 2045.

With the UK government's own Heat in Building's Strategy also released this week, we are starting to get a clearer picture of what the next decade of decarbonisation looks like.

Cutting the emissions from heating our homes and buildings is an essential part of reaching net zero. We all have a role in doing this, and we need to start doing it now. So how does the Scottish Government’s strategy shape up? On the positive side, the strategy is seriously ambitious; a phase out of new boilers by 2030 and a 70% cut in emissions by 2030 puts Scotland well ahead of the rest of the UK. But on the negative side, there are still far too many gaps in the roadmap to getting there. There is too little clarity for people on which green heating they should replace their boiler with, and the finances still seem unlikely to stack up for many households.

Scotland’s strategy is backed by £1.8 billion in Government funding over this parliamentary term (2021-26). In addition, a Green Heat Finance Taskforce will look to attract private investment to raise the five-year figure closer to £2.5 billion. £1.8 billion simply isn’t enough. The Scottish Government’s own assessment is that “the total capital cost of converting our building stock to zero emissions by 2045 is in the region of £33 billion.”

Based on the roughly 2.5 million households in Scotland, that amounts to around £13,200 per household.

The Scottish Government itself will be contributing to this total of £33 billion with potentially a similar circa £2 billion for each parliamentary term for the next 24 years (up to 2045). This leaves the remainder of the costs falling to consumers who will be making changes and investments to their own homes to reduce carbon emissions to the tune of £9,000 - 10,000. And that’s too much for most families. To make good on the targets, the cost of low carbon heating needs to fall or the amount of financial support needs to increase. The strategy lacks a clear plan for closing this gap.

The alternative to boilers is not made clear

For most families, spending nearly £10,000 to decarbonise their home heating is an impossibility. But not for everyone. To meet the 70% reduction in carbon emissions from homes by 2030 set out in the strategy, we need those able-to-pay consumers to act well in advance of that date to reduce their carbon emissions.

According to this strategy, what should an able-to-pay consumer who is keen to reduce their emissions right now do? The strategy is unclear – and one of the reasons for the lack of clarity is the Scottish Government’s stated interest in hydrogen as a home heating fuel.

Hydrogen for homes is a distraction in the short term

Decarbonising around 2.5 million homes will need multiple approaches but the jury is still out on whether hydrogen is going to be a viable alternative to natural gas. The evidence and the costs still need to be evaluated.

Even if we assume that hydrogen could bea realistic and scalable solution for the majority of the population in the future, that is not the case now. Realistically, hydrogen won’t be heating our homes within the next nine years, during which we need to reduce emissions by 70% .

On top of this, even if we assume it is possible for hydrogen to become the best option before 2030, the cost of the rollout of a hydrogen grid would be significant. Certainly more than a mass government-subsidised heat pump initiative which could take hold years sooner.

I think it is correct to continue to investigate hydrogen and the Scottish Government-backed H100 Fife 100% Hydrogen Project is a world leading project to bring 100% hydrogen to 300 houses, extending to 1,000 in its next phase of deployment.

However, by focusing on future use of hydrogen, the signal to homeowners thinking about how to decarbonise their heating is ‘maybe wait and see about hydrogen’. Such a message will give pause to people for whom alternatives like heat pumps are already viable and affordable, and delay our journey to net zero.

Rebalancing energy prices is important but not easy

The Scottish Government’s Heat in Buildings Strategy does set out some plans that would make electric heat sources like heat pumps more attractive - but it will need cooperation from Westminster.

The strategy states: “We do not have the levers to control energy prices, such as reforming the energy market or restructuring the various levies and charges that are added to energy bills. These powers remain reserved to the UK Government”.

We need a rebalancing of the price of gas and electricity - this is absolutely necessary - but it is a power reserved to Westminster. Electricity currently attracts a disproportionate amount of taxes and levies, but as Scotland is now able to meet 97% of its electricity demand from renewable energy sources, the taxes and levies need to prioritise and incentivise greater use of our renewable electricity.

The carbon taxes need to be addressed and rebalanced to bring the price of electricity down considerably, while potentially making gas more expensive. As a way of changing attitudes and behaviours, such a move would make low-carbon heating options more attractive so it is good to see the Scottish Government making the case for it.

However, the benefits won’t be felt universally. The knock-on effect of higher gas prices on lower income households – who are less likely to be able to pay up-front costs to install low carbon heating systems and benefit from the reduced electricity cost – is problematic, to say the least. We must not find ourselves in a position of exacerbating existing inequalities as a consequence of our journey to net zero.

Fuel poverty and the just transition

Of the £1.8 billion in funding announced, the strategy earmarks £200 million for heat and energy efficiency projects in social housing over five years. And “at least £465 million to support those least able to pay through programmes targeted at those in fuel poverty”.

Our analysis shows that social housing already has a higher average EPC rating than other tenure types thanks to existing policies. Legislation, in place since 2014, has recently been updated to state that “no social housing below EPC Band D should be re-let from December 2023” and to include a Band B target for all socially rented properties.

That does not mean that more cannot or should not be done to improve energy efficiency in social housing.Measures to support those in fuel poverty – especially at this time of escalating gas prices – are incredibly important.

One quarter of the £1.8 billion budget being focused on supporting those least able to pay is a noble commitment, but only if it enables households to access lower costs in the long term. It is vitally important that lower income families are supported through the installation of energy efficiency measures as well as low carbon heating systems so that they are ‘future proofed’ against higher gas bills. Helping people to pay their current bills without additional measures to mitigate rising prices simply pushes the issues down the road.

The need for joined-up approaches

The Scottish Government’s Heat in Buildings Strategy has the right aims – a rapid transition from boilers to green heating – but it does not yet have everything required to deliver it. The mixed messaging to the public on what they can and should do now only serves to highlight the scale and complexity of the challenge we face when it comes to decarbonising our home heating.

Our recent report How to Heat Scotland’s Homes looked at the issues involved in heating traditional housing types in Scotland where insulation and energy efficiency, and therefore heat pump viability, are a concern.

Reflecting on that report, I tried to make the case for joined-up, cross-sector partnership working to develop, test and implement the multiple approaches net zero home heating will require.

A view that seems to be shared by Patrick Harvie, Minister for Zero Carbon Buildings, Active Travel and Tenants’ Rights, in his Ministerial Foreword to the Heat in Buildings Strategy: “Transforming our homes and workplaces will be immensely challenging, requiring action from all of us, right across society and the economy... We need to work together across sectors and jurisdictions to overcome these issues, and to deliver a just transition”

With COP26 on the horizon, we need recognition that the climate emergency is not just a universal challenge but also an opportunity to work together to address it. To build comprehensive partnerships – at a community, local, national and international level. We will be at the Holyrood COP26 Fringe Festival alongside the Under2 Coalition to discuss what those partnerships might look like and what they could achieve.

Scotland’s Heat in Building Strategy is another tentative step along the path to net zero. But we need to do more if we want to make the rest of that journey a bit more surefooted.

Part of
Nesta in Scotland 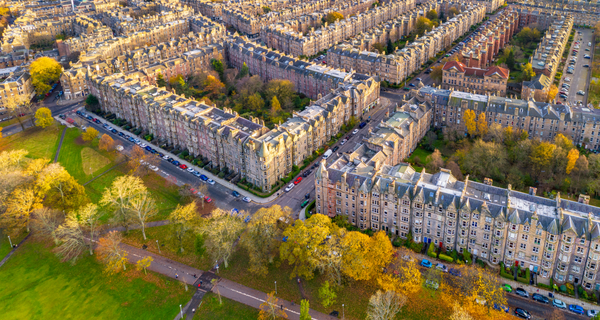 How to Heat Scotland's Homes

An analysis of the suitability of properties types in Scotland for ground and air source heat pumps.
Report
09 September 2021 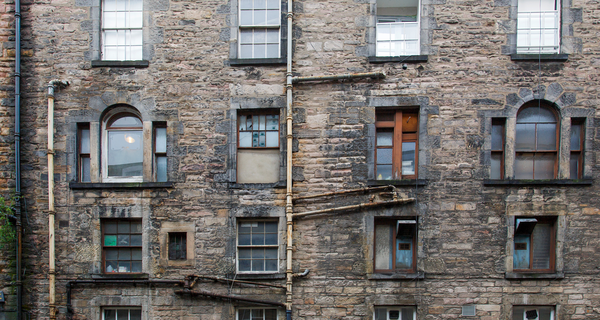 How can we get low-carbon heat into traditional tenement flats?
Blog
10 September 2021 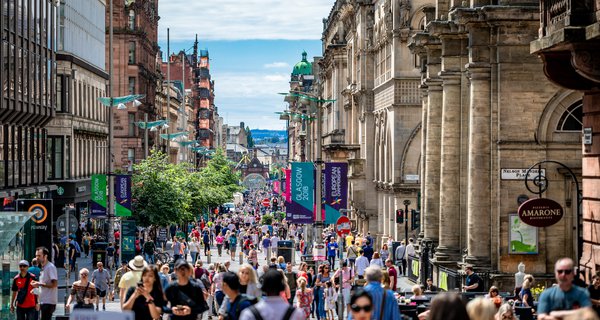 Nesta and members of Under2 were at the Holyrood COP26 Fringe Festival for a discussion on the importance of building comprehensive partnerships to take innovative action on the road to net zero. We also be showcased ou…
Event
05 October 2021