What big issues are getting most Twitter mentions?
06 May 2015
4 min read

As election campaigning ends and the tricky business of government building is looming, we take a look at the themes that have defined the political landscape over past weeks and months using the Political Futures Tracker.

In this final Political Futures Tracker blog prior to the election, we explore the key themes and associated sentiment per party to see what big issues are getting most Twitter mentions as campaigning reaches fever pitch. We find out what politicians are saying on the big issues that matter to voters and look at what this insight could mean for a future government. 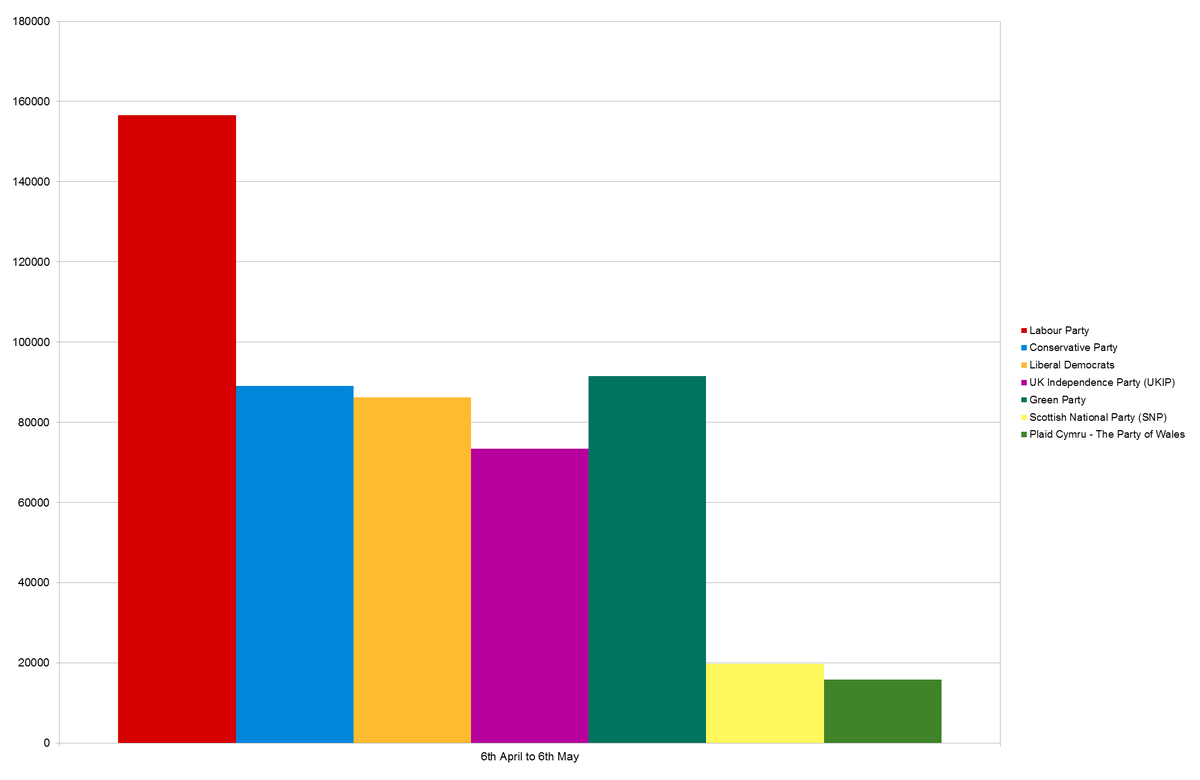 Over the past week, we have seen the Conservative party posting proportionally fewer tweets - being overtaken in the charts by the Liberal Democrats, and continuing to post at a lower frequency than the Green Party. 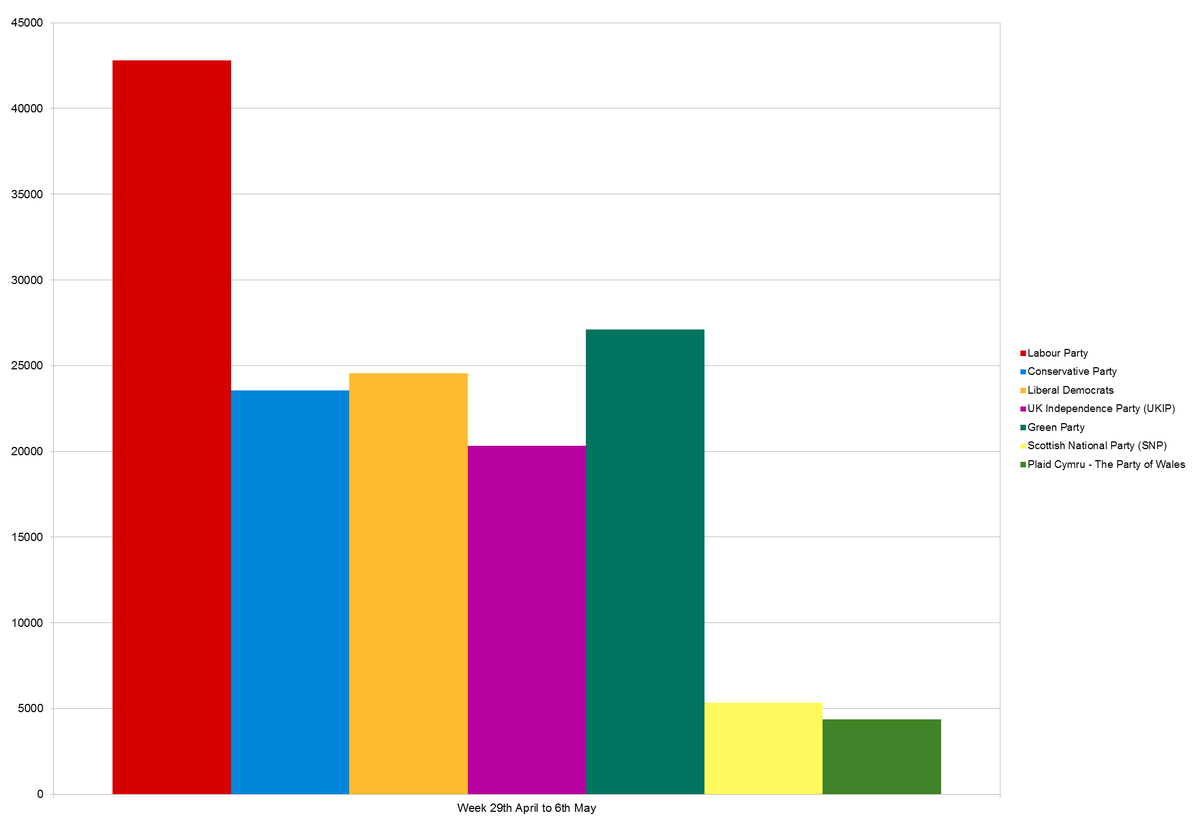 But we have also seen Public Health, Business and enterprise, and Schools in the top 10 themes for most parties.

On the UK Economy, recent rhetoric around economic credibility, including which party is best placed to manage the UK's tentative economic recovery has been fuelled by new growth and productivity forecasts, and party political battling over 'ownership' of the theme. One of these forecasts from The National Institute of Economic and Social Research (NIESR) was published yesterday. NIESR cut its British economic growth forecast to 2.5 percent this year, from a previous forecast of 2.9 percent made in February.

The Green Party have shifted from a focus on Transport and the Environment over recent months, to cover more politically mainstream issues, such as Tax and revenue, the UK economy and increasingly, the NHS.

We see this trend echoed for Labour, where the NHS is now the party's top tweeted theme

In the Lib Dem's manifesto, we see that the NHS is 5th on the top themes chart - over the last week the Liberal Democrats have focused increasingly on the NHS and Public Health more broadly - perhaps responding to the high number of mentions from other parties.

Plaid Cymru and the SNP continue to focus on Wales and Scotland respectively. But for the SNP the proportion of Tweets on Scotland, compared to other themes - the UK economy in particular - is much lower than has been previously seen.

As we near the end of campaigning, we see that UKIP focus on Europe and Immigration - core themes that we see repeatedly cited as election differentiators in the UK Economy dominated campaign. No other party analysed features Immigration in their top 10 themes over the last week - and as we saw from analysis of manifestos Immigration was low on the top theme pecking order - in fact Immigration did not feature in the top 20 themes from Labour's Manifesto.

Despite many parties side-lining Immigration in their Twitter election campaigning, this theme continues to evoke strong associations with sentiment...

Positive sentiment is expressed about Borders and Immigration over the past month, a theme that ranks forth in the sentiment associated theme chart. 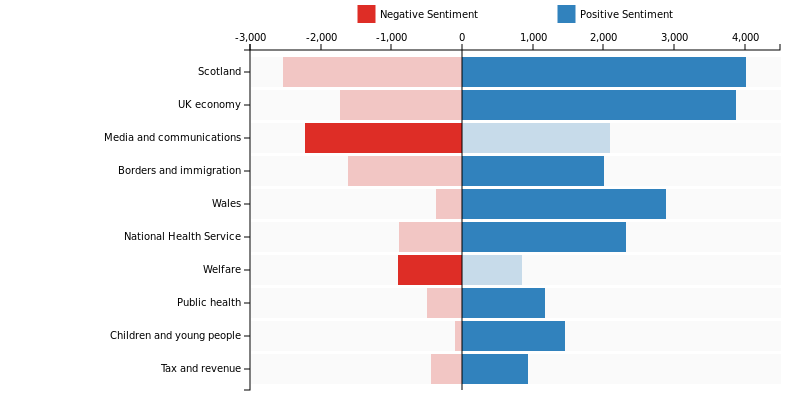 But over the past week, relative mentions of Immigration has dropped

Looking at the top themes per party, the influence of Plaid Cymru is also seen on the sentiment chart, with Wales featuring in the top 10. 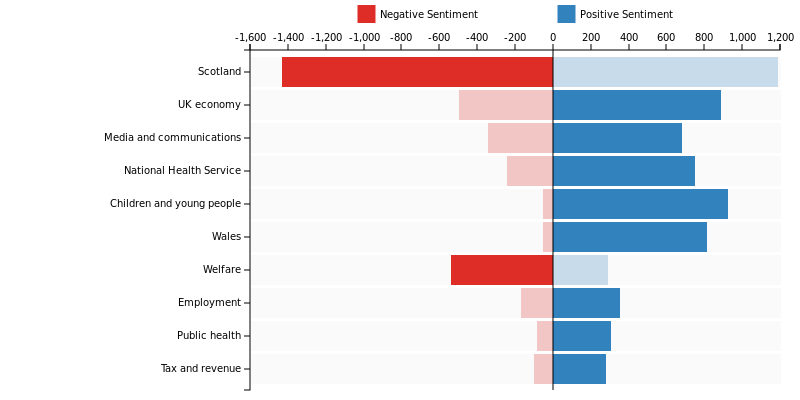 Using analytics from the Political Futures Tracker, we will be looking back over the election build after votes have been cast to identify lessons for future government. By telling the story of the pre-election period we can boost understanding of themes that won or lost the election, and the way that politicians talked about these big issues. Stay tuned for further analysis, and brace yourselves for the election-day onslaught!