Part of Shared visions of a sustainable Scotland
Tuesday, 11 August 2020
In A sustainable future
In Futurescoping
4 min read

Throughout our project Shared visions of a sustainable Scotland, we will be issuing updates based on our conversations with our co-visionaries in Scotland. Below are some reflections on the first workshop and the ideas we will take into the second workshop this week.

In our first of three workshops we started by reflecting on the very different responses to the COVID-19 crisis and the climate crisis. We asked what would be different if the latter was more like the former. For instance, would daily climate briefings with scientific advice, updates on current figures and localised information make us feel differently about the crisis? Perhaps we should each receive a letter from the Prime Minister telling us about our collective responsibility to not exacerbate the crisis.

Since the workshop, the thoughts and ideas of our co-visionaries have been coalesced into a set of scenarios. We will use these to speculate on futures where sustainable work, industry and environment are at the forefront.

Some of these thoughts were focused on a greater understanding, education and awareness of climate issues. And ways to help change attitudes and decisions across society, from personal decisions to policy and governance.

Others were calling for new ways of working and measuring success as a society and in the workplace. For example, ‘shift to measuring success beyond purely growth-based’ and ‘more power to employees to test green credentials of employers.’

There were calls for new approaches to incentivising change for industries and offices with an ‘acceleration of building standards changes’ and a ‘move beyond net-zero’ to ‘build assets that are carbon positive.’

Our overall aim through the Shared visions of a sustainable Scotland project is to create possible visions of a better, greener future. So for our next workshop we have created a set of future scenarios to explore, such as: 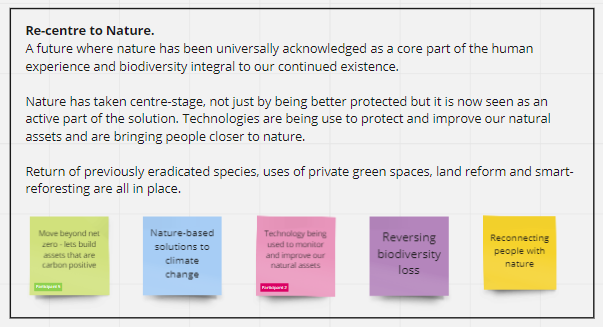 Example: What are offices for?

The question ‘what are offices for?’ would have once felt like a strange question to ask. Now it is one which is actually quite difficult to answer. With many people adapting well to remote working, or even thriving with it, the wasted time, effort and cost of a heavy commute seems to outweigh the benefits of a 9-5, Monday-Friday office experience.

Using the office as an example, it is relatively easy to imagine how our working spaces could be radically different from what we currently have.

From the Google-style office with wellbeing rooms, meditation zones, and even slides, to co-working spaces where you spend your time not around your direct colleagues, but people from other companies who share a common area of interest, such as The Melting Pot in Edinburgh. Or to more radical ideas where we could randomly assign co-workers in a VR environment - like Window-Snap for offices.

The BBC have recently taken a look at what coronavirus will do to our offices and homes.

How much time do you want for your progress?

A quick note on timescales and progress.

I have found time to be an especially strange concept over the months of lockdown. Thursday afternoon is the new Tuesday morning and Wednesday no longer seems to exist.

The world wide web was first used in earnest in December 1990. Over that relatively short time period we have seen the exponential boom in technologies and connectivity that have propelled us through the ‘information age’ (1990s onwards), the ‘social age’ (2000s onwards) and into the ‘data age’. Yet, against this technological progress we seem to be continually frustrated by the lack of progress on social issues such as gender equality, equal life chances and racial equality. James Baldwin’s quote above comes from an interview he recorded over 30 years ago, and the lack of progress over that time makes his point even stronger.

Progress takes time - and yet that should not be used as an excuse to take our time on progress. Often, what holds up progression is not a lack of technological solutions or lack of ideas, but rather the deliberation and the slow shifting of public opinion. Again, the response to COVID-19 has shown us that progress can happen quickly, if we let it.

When thinking about the future we really don’t know what will come next – hopefully not a rerun of 2020 – but with a positive view of progress and the appetite for change the possibilities open up in front of us. We may not know what technology, society and working life will look like even in the next five years, let alone 30, but that doesn’t stop us pushing for progress.

Our future could really be anything. Shall we make it something good?

Part of
Nesta in Scotland Shared visions of a sustainable Scotland 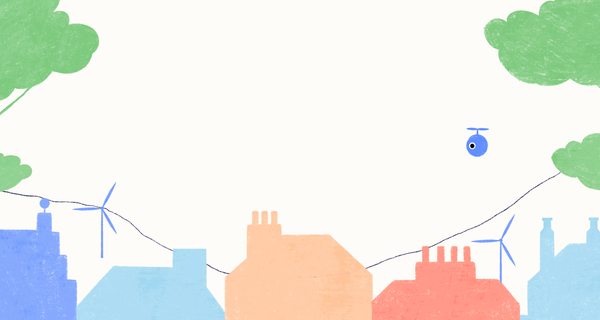 Shared visions of a sustainable Scotland

Can shared visions of a sustainable future help us move towards one?
Project
17.07.20 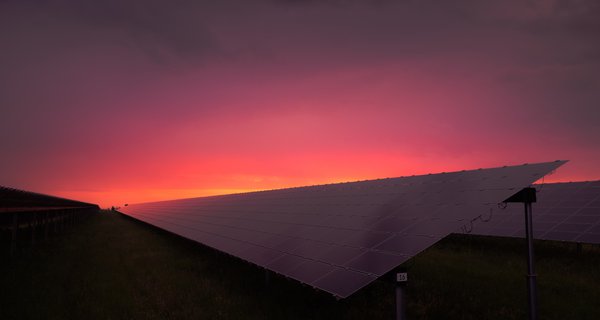 Life should not feel normal: Treating the crisis as a crisis

An update from Nesta in Scotland on the Shared visions of a sustainable Scotland
Project Update
27.07.20