Bhakti is in her 50s and has diabetes. She has a teenage daughter with physical disabilities and a lot of demands on her time. 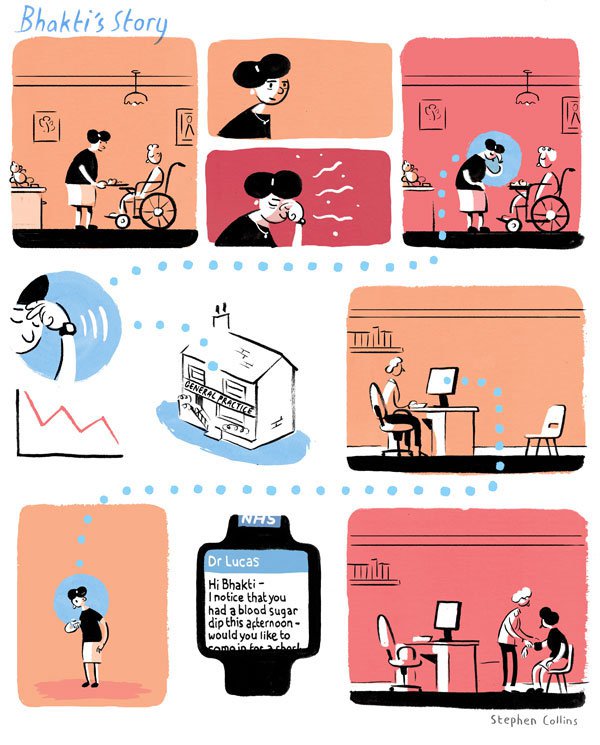 Bhakti gets a lot of personal satisfaction from running expert carer sessions for other parents of children with severe physical disabilities. But after the exhausting, emotional work of delivering the training, all the required administration and evidence gathering can feel like a chore.

Bhakti’s management of her diabetes faltered under the pressure of her commitments. She moved to this new regime after an adherence consultation, which she was invited to after a few missed appointments. Her counsellor pressed the point that while it is natural for her to put her daughter first, an effective carer keeps themselves healthy too.

Bhakti decided that for now, the best solution is to delegate as many decisions as possible. She wears a blood glucose monitor on her wrist that uses ultrasound to test her blood through her skin every few minutes.

The monitor connects with an app on her mobile phone, which securely sends the data to her diabetes specialist centre. The data analysis system housed at the centre sometimes recommends small changes to dosage and diet, which are checked by a consultant before being sent to Bhakti. Significant changes trigger the system to book an appointment. All the data is available to her should she want it. But for now she chooses to only see validated notifications that require action.