Pam and her husband are lucky, she says, as they have a strong support network. Yet a tricky furniture move required a little extra help from some local volunteers.

“We’re always there for each other,” she says. “If one of us has a problem, we go to the other for help. If we need someone, they’re there. If they need something, we are.”

The pair, who have been married for fifty two years, also have multiple grown-up children, who live as far as Glasgow and as close as Twickenham, where they themselves live. Before her husband became disabled, Pam says, they visited their son in Glasgow once a year, though visits have been less regular since he had children with additional needs. Two other children live closer by, acting as the couple’s “main supporters”.

“If I’ve got a problem, [one of my sons] is over like a shot. My daughter, who lives in East Sussex, she’s over every week. She’s always on call if I need her, or if I’m worried or upset. She’ll come over immediately.”

During lockdown, Pam leaned on her daughter particularly heavily, creating a support bubble of the two families. As well as the practicalities of shopping and household tasks, the bubble offered emotional support for Pam as she cared for her disabled husband. “My husband wasn’t very well [during the second lockdown], so there was a lot of pressure on me,” she says. “The first lockdown was fine, we could sit in the garden, the weather was good. But the last one was difficult because it was so dark so early in the day. It wasn’t pleasant at all.” The bubble also offered a space for some much needed fun: “you can play games easier with four people than you can two!”

Even with such a strong network, both within the family unit and beyond it, earlier this year Pam and her husband ended up needing some extra support. Pam’s husband, who had existing disabilities, broke his hip during lockdown and had to go into hospital, rushed into accident and emergency late at night.

Because of the mobility issues induced by the accident, Pam’s husband needed to sleep on the ground floor (“he couldn’t begin to manage the stairs”). But one thing stood in the way of a small bed being placed in the front room: a huge, heavy sofa that seemingly nobody could move.

First port of call was a service within the couple’s local council, who Pam arranged to collect the sofa so it could be refurbished and passed on to other families in need of furniture. This fell through, however, because of safety stipulations: there were no labels on the sofa indicating whether the material was fire retardant, meaning the service couldn’t accept it and therefore couldn’t help move it either. The general collection service, also run by the council, were able to take it away – but wouldn’t help move it from the living room to the pavement. So the sofa stayed in place.

Family members, who Pam normally relies on for help, were also unable to move it: “it was just too heavy,” she says. The son who lives closest to the couple, and who normally helps with some heavy lifting, has an auto-immune disorder which limits his strength, so while he and his wife were able to get the bed down the stairs and into the living room, they could only move the sofa a few inches before giving up. Dragging it a short distance was hard enough; getting it over the front step was completely undoable.

Meanwhile, hospital teams were pushing Pam to move the bed so that they could discharge her husband into community care. “I kept saying: ‘I can’t do anything until I get the single bed downstairs, and I can’t do that until I get the sofa out of the way’. That was when they put me in touch with the British Red Cross team.”

British Red Cross immediately got to work, enlisting GoodGym runners to help shift the sofa. Pam didn’t meet the runners herself as she was in hospital with her husband, but knows for sure that two men – who she presumes were fairly strong – came to do the job, having seen a picture of them perched on the sofa after it had finally been moved outdoors for the council to pick up.

Pam says she “doesn’t know” how she would have managed without the help of British Red Cross and GoodGym: her solution, she thinks, would have been to find somebody who she could have paid to move the sofa, although she also notes that this option would not be available for others in their situation who had unstable finances.

While this has been her only experience with GoodGym to date, Pam also says it was “extremely reassuring” that the organisation had let her know they could support the couple in the future. “I hadn’t even thought about approaching them myself until the hospital put me in touch, and I’m sure there’s lots of other people who are in the same boat – I would definitely recommend them”.

Overall, the help was invaluable: even though they do have others to rely on in their own networks, the couple simply would not have been able to move the sofa on their own, with family help or otherwise.

“It relieved so much stress. I was so stressed because the hospital wanted to discharge my husband and they couldn’t. My husband was just happy he could come home.” 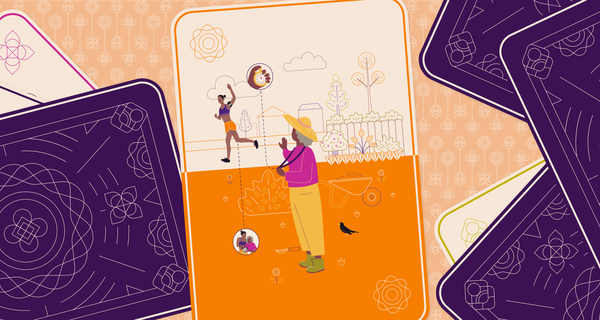