Early in 2020, just before the pandemic hit, Madhu decided to take a year off. “The intention was to travel,” she says. “COVID kind of scuppered all of those plans!”

Grounded at her home in South East London, and obviously unable to travel, Madhu decided instead to focus on volunteering. At the time, she wasn’t new to GoodGym: in fact, she was an active member of the community for several years before coronavirus hit. But the pandemic – and a full year off work – meant that she had more time to focus on taking part in missions.

Madhu has now completed over 320 missions, taking on almost every kind of task and run GoodGym has to offer. For the last two years, she has been visiting an older person in a care home, though these visits have obviously slowed down due to lockdown measures. She’s also worked on local projects through community runs and gone out on group runs too.

Her favourite, however, are missions. “The community missions are great,” she says, “But I think for me, seeing the effect GoodGym’s help can have on one person is what really touches me.”

The most common tasks Madhu has completed are grocery shopping and moving furniture, working with British Red Cross teams to ensure people can be discharged from hospital into a safe home environment. She’s also hung pictures, changed light bulbs, and gone into schools to help with tidying among many other tasks, and even helped measure the presence of bats in a local park as part of an ecological survey. “That was one of the more unusual missions I’ve done!” she says.

One mission had particular meaning. Several years ago, Madhu and some other GoodGym runners met a woman whose husband had early-onset dementia: the team had been sent to help her move furniture following his discharge from hospital, visiting several times to get everything done. A few years later, Madhu met the woman again on another task, after her husband had been put into full time care.

“We were able to see her again and hear a little bit more of her journey,” she says.

“It’s the people you meet, the stories you hear – it makes you realise how much more you can do in this world.”

At first, having been told about GoodGym by a friend, Madhu was reluctant to sign up. “I was a bit apprehensive about turning up on my own, and the running thing seemed a bit intimidating,” she says. “At that point I’d never run more than about 5k, and I complained the whole time.” But after attending a session with her friend for moral support, she never looked back. “After I went to that first session, I was hooked.”

GoodGym appealed to Madhu on a number of levels. Firstly, she had always been passionate about volunteering and wanted to do more; secondly, the group she did her first run with was “really accepting”, and didn’t care how fast or slow she went.

The impact GoodGym has had on Madhu can’t be understated, she says. “It’s changed my life – that’s not an exaggeration,” she explains. After spending so much time completing tasks during lockdown, Madhu decided to change careers, moving from the private to the public sector.

“What I was doing [during lockdown] made me realise I wanted to do something with more of a social impact. It has opened my mind to issues I wasn't aware of and made me want to make the world a bit of a better place to be in.” Participating in tasks has also changed how she feels about her body, improving her fitness levels significantly.

Most importantly, however, Madhu has developed a strong sense of community, both in terms of those she has completed tasks for and those runners who have helped her do it. Many of her close friends are now people she met through GoodGym.

“It was about finding like-minded members of the community,” she says. “Other people would look at me and say ‘why are you spending your Saturday doing somebody else's garden?’. I wasn’t doing it because I enjoy gardening – I hate gardening!”

“But I knew that old person hadn’t spoken to someone in a week. Finding people who understand why you want to help others makes you feel less alone.”

As mentioned, Madhu has just taken on a new role in the public sector, meaning her capacity to take on tasks has slightly diminished. Her focus and commitment is unwavering, however. “I’m not as impressive as the people who have done thousands of tasks, but I’m hoping to get to 500 by the end of next year,” she says. “I’d really like the next t-shirt saying I’ve done 500!” 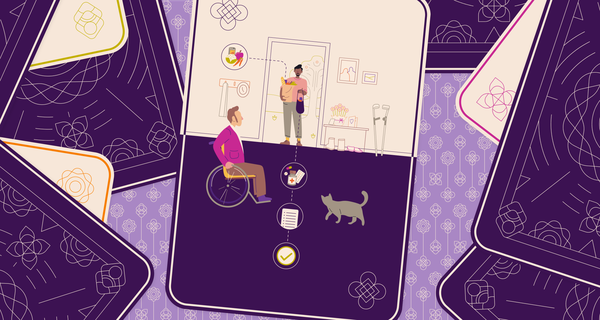 Michael’s story: Spurred on by a stranger's support

Michael talks about how getting support has helped his own motivation