Janet has lived in the same flat for nearly forty years: born in the block that she still lives in now, she moved thirty seven years ago into a fourth floor flat. And while she knows her neighbours, when Janet fell seriously ill it was help from GoodGym and British Red Cross that cleared the way to her coming home.

Around Christmas 2020, Janet developed a problem keeping down her food, eventually reaching the point where she would throw up as soon as she ate. “So I stopped eating for four months,” she says. Eventually, after several months of getting weaker and weaker from lack of food, she fell.

“I didn’t hurt myself in any way, but I was entirely unable to get off the floor,” she says. “So some lovely paramedics picked me up and took me to hospital, where the most amazing team of specialists in all sorts of departments found all the things about me they didn’t like and started fixing them. They did umpteen scans, X-rays, blood tests, blood sugar tests every couple of hours, blood pressure every couple of hours. I was very, very thoroughly ministered to.”

After nearly three weeks in hospital, Janet was cleared to come home. But there was a snag: because she had become physically weak in the months leading up to her admission to hospital, the flat “was a real, real mess”, and not appropriate for her to return home to. So, with the help of the British Red Cross hospital team, GoodGym came in to once again make the flat safe.

“I wasn’t here when they came round. But I came out to something that wasn’t going to kill me every second step.”

One part of the job was boxing up papers and books that were strewn around the flat: although the runners were obviously unable to sort through the papers themselves, they used cardboard boxes to safely store them in an area away from walkways. (Janet is now able to slowly sort through them, organising boxes into ‘keep’ and ‘shred’.)

Another was moving a sofa Janet describes as “seriously decrepit” in order to make room for a rise and recline chair provided by the hospital. Runners from GoodGym stood the sofa on one end in the corner to make room for the chair, and after Janet was home from hospital some volunteers from British Red Cross returned to take the chair downstairs to be collected by the council.

If she hadn’t had the help, how would she have dealt with it? “It would not have got done,” Janet says. “I have neighbours who hold my keys but they have their own lives, their own jobs – I can’t expect them to be mucking in around me. In order to be able to come home, what they did was invaluable.”

Janet is now back at home: at the moment, she still struggles to concentrate and spends much of her time watching the television and trying to recover. “I keep saying I’m about to take up sewing again – I have the machine to do it, but I’m so intimidated by it. But I’ll worry about that when I’m feeling better.” She also has a physiotherapist helping with her weakness, and a carer who comes in four times a day to help with various household tasks.

Getting home was only possible with the help of GoodGym and British Red Cross though, she says, and both a practical and emotional help.

“It was such a sense of relief that it was possible to walk across the floors without stepping on piles of paper... When I came through the door and saw that piles of books and paper had been moved somewhere contained and tidy... they were still there, but they were no longer in the middle of the floor, waiting to jump out at me. It was just such a relief.”

With limited mobility, Janet is also keen to use GoodGym again. “It’s just a brilliant organisation – I would definitely use them again.”

“I'm so amazed that there are people who are willing to volunteer to do real, heavy-duty physical work for other people.” 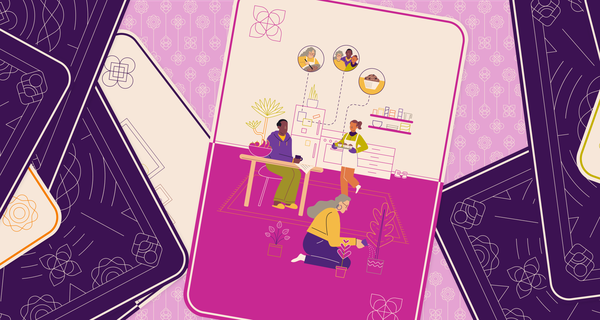 Pam and her husband are lucky, she says, as they have a strong support network. Yet a tricky furniture move required a little extra help from some local volunteers.