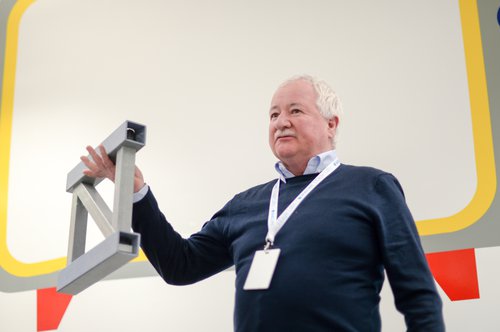 What is the inspiration for your product, and how do you think it will help people across the UK?

It must be said, I'm an oddball. After training as an architect, I discovered fibreglass. Then I discovered pultruded fibreglass. It’s even better. I thought, why aren’t we building low-cost houses with it? In 2005, I gave a presentation to the Network Group for Composites in Construction (NGCC), asking that question. NGCC is as small as its name is long but that’s how I met John Hutchinson. He’s an architect and another oddball who knows a lot of things that I don’t. We’ve collaborated ever since.

We wrote papers, attended conferences and then I managed to get a consortium together with funding from Innovate UK to build the Startlink house. Three storeys high, it uses pultruded fibreglass instead of concrete and steel. That’s important for environmental reasons. Making steel and the cement that binds concrete, each emit about 3.2 billion tonnes of CO2 every year. Pultruded fibreglass emits 80% less. The intention was to break with tradition and build faster for less without concrete or steel. The house is energy-efficient to Passivhaus standards but politics intervened and it got no further. That’s when I thought of Spacelink.

Why did you apply for the Inventor Prize?

Inventions need to get noticed. I’d had support from Innovate UK and Spacelink won the Travis Perkins Innovation Award 2016. Yet I still couldn’t see how to get it to market. I’d invented a way of making fibreglass outperform steel and steel is everywhere. Where to start? The Inventor Prize offered a way. It also offered the challenge of writing a business plan by a deadline. Our ambition had always been to develop low-cost housing by exploiting the favourable properties of pultruded fibreglass. With the support of Nesta and Barclays, I began to see how.

Grenfell Tower highlighted the danger of plastics in buildings. Cheap sheet and foamed plastics are used increasingly, only to end up in landfill. They degrade into microplastics that are transported by water into the oceans. There, they attract dangerous toxins that eventually enter the food chain.

We need a way of building quickly and reliably without plastic sheet, plastic foam, steel or concrete. We also need a lot of affordable homes. That was my challenge.

What are your plans throughout the Prize (e.g., prototype development, user testing)?

Sometimes, chance works in your favour. I recently learned how the Caravan Act might enable lease purchase of homes instead of mortgages with hefty deposits. Using Spacelink joining technology, pultruded fibreglass box could make lightweight frames that are as strong as steel but wouldn’t rust. They could be craned into position without concrete foundations. It allows the non-structural use of wood which has many other useful properties. Vapour open building materials like wood, don’t need plastic. They beneficially control the living environment through phase-change in water. It’s why, when it’s hot, we perspire (some sweat!). Poplar is a fast-growing hardwood and expanded cork makes effective insulation. Both are natural, renewable and inexpensive. An idea started to form.

Poplar is often used to make pallet bearers. It’s light and cheap. Brettstapel is a way of joining it without glue. Panels that are light enough for two people to carry could be quickly installed in a fibreglass framework on a 2.4m module, to make walls, floor and roof. Wood can be left fair-faced without plastering. Expanded cork provides insulation and cladding. It’s fast and surprisingly inexpensive.

A two-bedroom house could be built without wet trades, plastic sheet, plastic foam, steel or concrete, in two weeks. It could be purchased without a mortgage for around £50,000. It’s radical but workable. It’s green and affordable. Now, I want to get one built.