USE CASE: Soliciting ideas and priorities from communities for post-crisis rebuilding

Following decades of unrest, Somalia is starting to move towards recovery. However, government capacity to deliver services and respond to citizen needs remains limited. A lack of established accountability mechanisms not only prevents government decisions from being informed and guided by citizen input and feedback, but also reduces citizens’ trust in government to respond to their needs. In addition, there are limited channels and opportunities for meaningful interaction between citizens and the numerous aid agencies delivering support in the country.

What is the CCI solution?

The charity Africa’s Voices launched the Common Social Accountability Platform (CSAP) in Somalia in 2018 to increase the inclusion of citizens in decision-making across governance, humanitarian and development programmes.

CSAP connects Somali citizens to decision-making through a CI approach by maximising the scale and inclusivity of dialogue between citizens and authorities. It serves as a robust digital platform to gather and analyse evidence on citizen perspectives (including by using AI).The charity partners with a wide range of aid-related organisations and national and international government bodies (including Oxfam and UK Foreign, Commonwealth and Development Office) to deliver projects.

How is it being done?

The platform uses Coda2, a software tool built in collaboration with the University of Cambridge, which allows interpretation and effective labelling of large volumes of textual data. The tool uses AI to augment the interpretive capacities of researchers rather than to automate data analysis, enabling them to listen to and interpret a larger set of conversations in local languages. 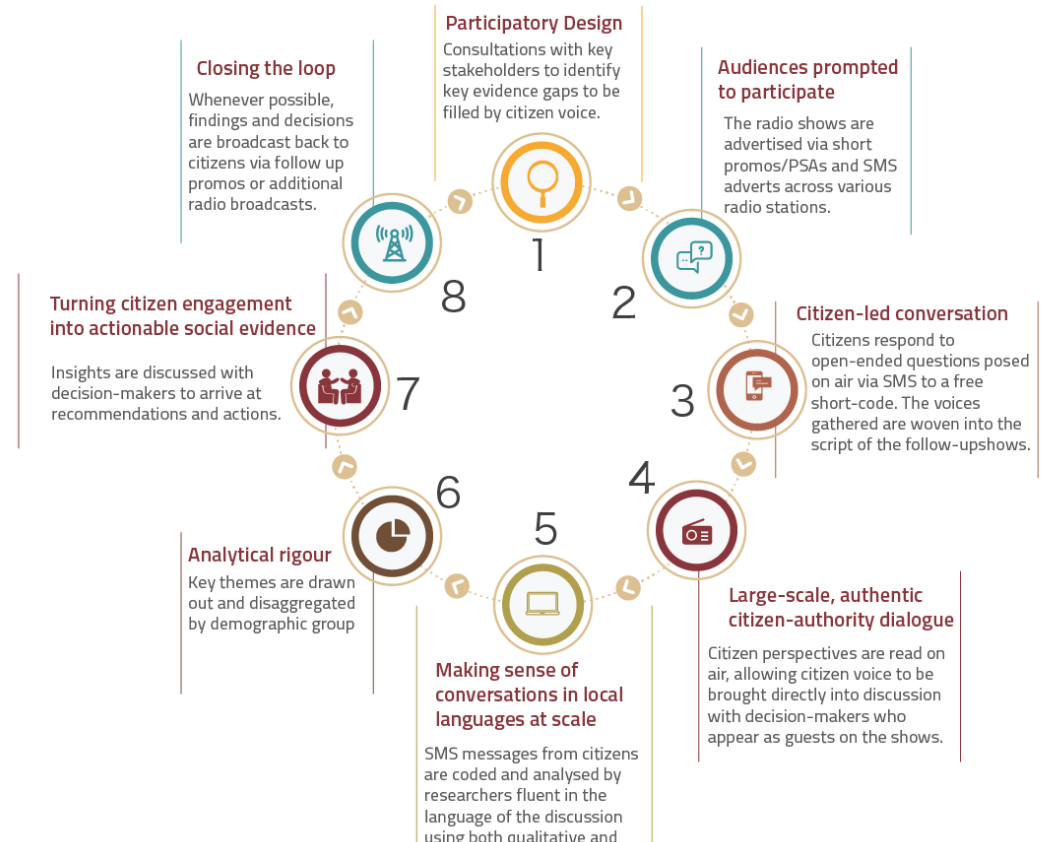 Since 2018, Africa’s Voices has engaged more than 18,000 displaced people in Somalia in policy discussions to help with post-crisis recovery. 78 per cent of participants in CSAP stated that the process made them feel involved in decision making, and 87.4 per cent of the participants reported that engaging with CSAP made them feel involved in decision-making in their community. The platform offers a sustained channel for open conversation between citizens and decision-makers, such as local and national government actors, humanitarian agencies working in the field, and other international organisations. The interactive radio methodology used by Africa’s Voices has also helped humanitarian agencies responding to COVID-19 to understand the local beliefs about the virus and vaccines that shape community behaviours. Their report summarising the findings of this research was used to inform communications and interventions by local NGOs.