The scientist claiming her seat at the table

The scientist claiming her seat at the table

Find out about Dr Ching-Yun Chang's impressive credentials and how despite this, she still struggled to find her place in a male-dominated field 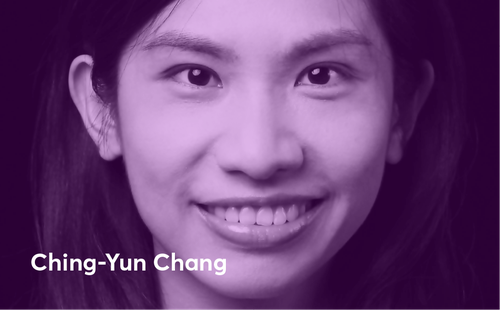 Getting young women into STEM-related careers is of utmost importance. Many believe that educating young people is pivotal to the wider mission of opening up opportunities in tech to a more diverse populace.

Dr Ching-Yun Chang is walking proof of that. Ching-Yun’s high school, in her home country of Taiwan, gave students one afternoon a week to choose an extracurricular club: Ching-Yun always chose computing. By fifteen, she’d already learned to code – and because she attended an all-girls school, this education had been provided by a series of inspirational female teachers and older students. Coding competitions between high schools built her confidence, though she also notes that there were very few girls teams.

Despite this passion for computing – Ching-Yun later completed a BA in computer science – it wasn’t until she studied under an MA supervisor with an interest in natural language research that she honed in on AI as a discipline. He “rebuilt” her interest in machine learning, she says, after she’d lost interest in it. She still cites him as one of her greatest inspirations.

Coding competitions between high schools built her confidence, though she also notes that there were very few girls teams.

Ching-Yun later completed a PhD in natural language processing, a post-doc in Singapore in natural language research, and is now working at Amazon in its Alexa AI team. Leadership in the company “focus on our strengths,” Ching-Yun says “if you’re good at something, they’ll really encourage you to develop in that area.”

With such impressive credentials, you’d expect Ching-Yun to have always been confident in her own abilities. But this wasn’t the case. She describes herself early on in her career as “nervous”, though she now feels “far more confident” in speaking up about her ideas.

Before Amazon, she felt that she “always underestimated herself”. “I thought others could do just as much as me, that I wasn’t special. But now I’ve worked with so many different people, I’ve realised I have a lot to contribute.”

This was “very much to do with being a woman”: She describes a male colleague who started at Amazon at the same time to her, citing his higher confidence. “He wasn’t afraid to ask questions,” she said, “I had to prove myself first.”

“I thought others could do just as much as me, that I wasn’t special. But now I’ve worked with so many different people, I’ve realised I have a lot to contribute.”

“Most people have a stereotype that women are less good at coding and maths,” Ching-Yun says. “That we’re weaker and can’t take criticism. Women are given less chance to perform, and given fewer opportunities to demonstrate their competence.”

Ching-Yun has lucked out when it comes to her co-workers – her former manager was Catherine Breslin, who she says “worked for us and championed us”, sharing advice, opportunities and knowledge with her team.

Race has also been an issue for Ching-Yun: “often in meetings I would be the only non-white female in the room. Over the last two years at Amazon, I’ve gained the confidence to speak up.”

As for her advice?

“We should never underestimate ourselves or overvalue others,” she says. “Try to find female leaders’ stories, try to build confidence – confidence is so important.”