Plaid Cymru released their manifesto this morning – here, we use the Political Futures Tracker to provide a bite sized summary of top themes. We tell you what sentiment Plaid Cymru are expressing about these themes and how future thinking they are about most mentioned big issues.

We can see that Wales is the undisputed top theme for Plaid Cymru, but also featuring firmly in the top 10 is the UK economy more broadly, as well as Business and Enterprise, and Employment. 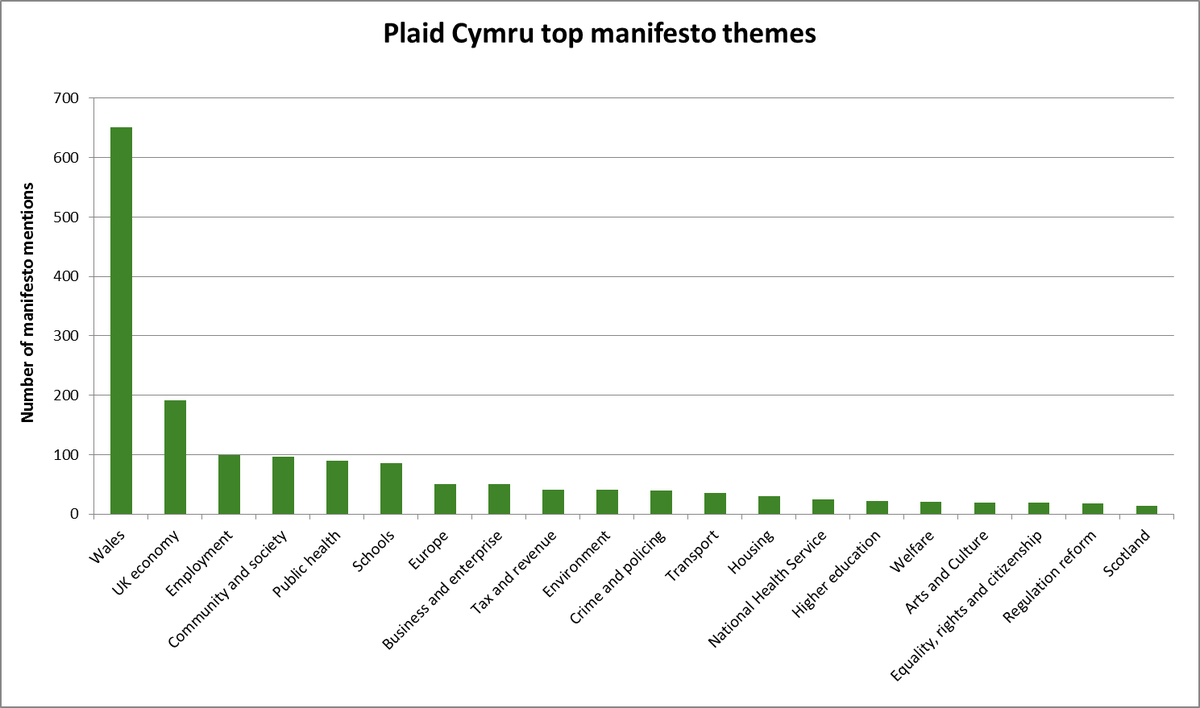 On Business and Enterprise - in the manifesto, Plaid Cymru suggest that by increasing business rates relief in Wales, more than 83,000 small and medium sized businesses will be helped and 70,000 businesses will pay no business rates at all. The party would create a Welsh Development Bank whose primary role would be to ensure adequate credit lines for Welsh businesses to maintain businesses and support expansion to create additional jobs within Wales.

Plaid Cymru states in its manifesto that it will establish a Social Innovation Hub to explore pressing social issues, creating lines of communication and access between those interested in developing a better society, including better communication between NHS practitioners and patients, or in reducing carbon emissions. We can see this theme expressed under a number of categories – from the UK Economy to Community and Society. 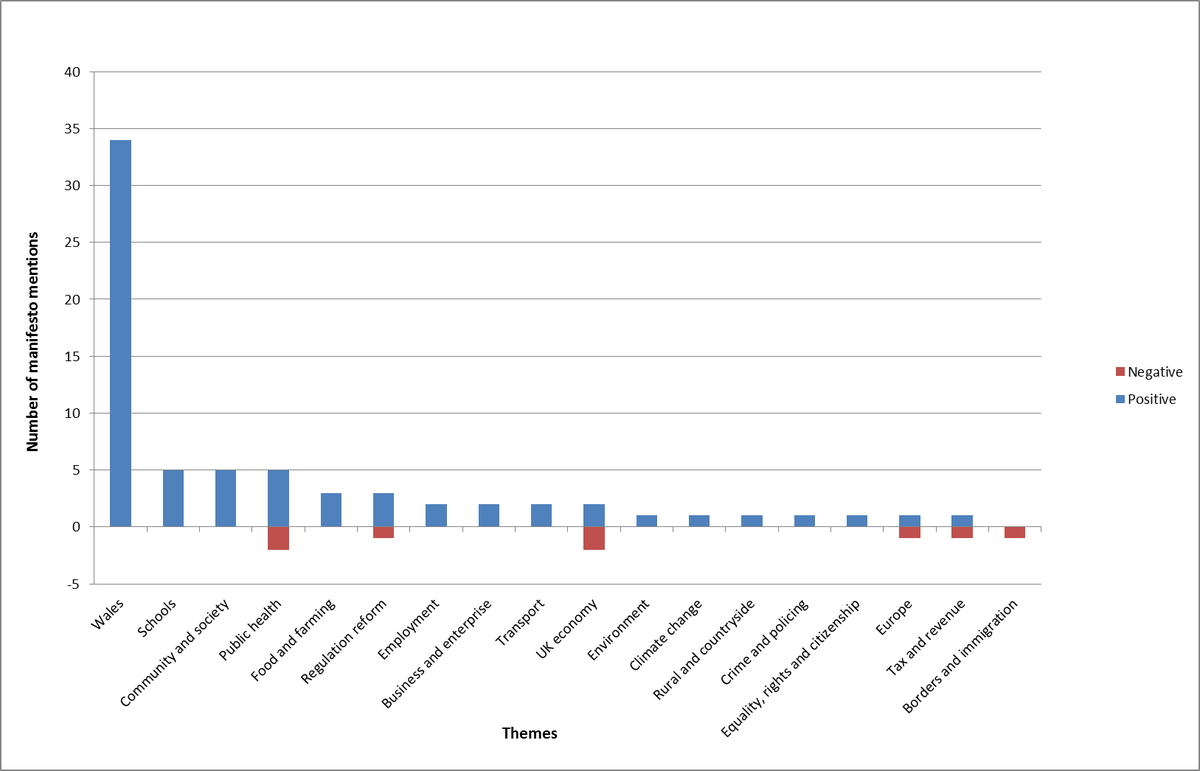 Sentiment analysis identifies words that have a positive or negative connotation within the context of the political text, for example in the manifesto Plaid Cymru state:

We will continue to oppose the public sector use of Private Finance Initiatives that have proved to be such poor value for money for the taxpayer...

This shows negative sentiment about the current use of Private Finance Initiatives, on the other side of the coin, we see Plaid Cymru are positive about their ambitions for healthcare in Wales...

We can see that on almost all themes Plaid Cymru are overwhelmingly positive. This may be indicative of the manifesto style where we tend to see lessened levels of criticism of other parties and a focus on party-political evangelism about certain themes.

But some negative sentiment was also expressed about Public Health … in the manifesto, Plaid Cymru states that it believes in integrating health and social care to make sure that the focus is always on the needs of the patient, by removing unnecessary paperwork and ensuring cooperation between organisations. 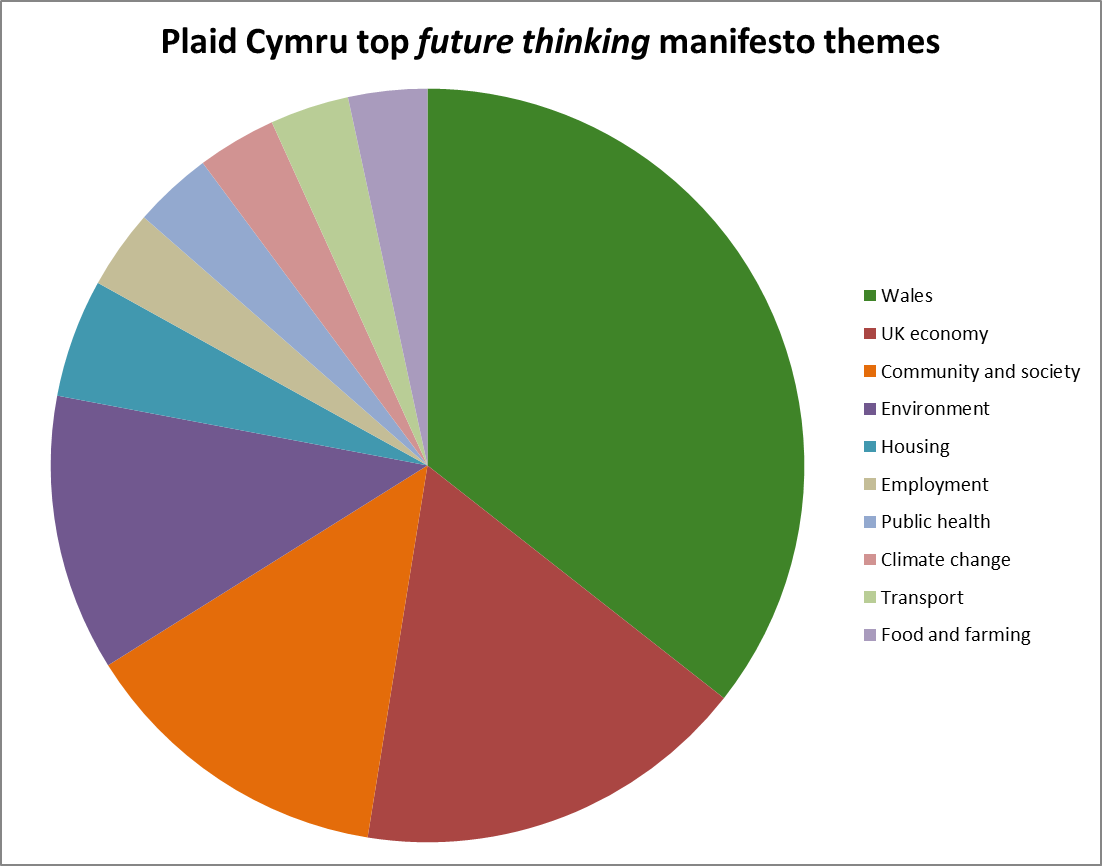 The extent to which Plaid Cymru are future thinking on certain themes tends to reflect the themes they are most positive about, including Wales, Community and Society and Public Health. Future thinking analysis automatically identifies words that are time sensitive, and codes the extent to which a theme is being written about a past, present or future context. This tool allows us to compare and contrast how future thinking political texts or tweets are from all parties, (now former) MPs and candidates. For example ...

... this quote looks to beyond the next 10 years and shows a long term example of future thinking.

The trend for political short termism on the themes that win elections (owing to the electoral cycle and targets for implementing and perceiving political change), is bucked by Plaid Cymru’s manifesto where the party has taken a longer term stance on many of their key campaign themes.