John is a data scientist focusing on the digital and creative economy. He is interested in the interface of economics, digital technology and data.

Watson and Crick, a business meeting a new client, Jobs and Wozniak, a company finding a new employee, Jagger and Richards - new connections forming between people and organisations are a major source of economic activity and innovation. But how to foster them most effectively?

The starting point for collaboration is that people need to connect in the first place. Indeed, there is a whole industry devoted to making this happen: the events industry. In the UK alone it is estimated that £40 billion is spent attending conferences, trade shows and large meetings.[1] In the past, the connections at events went largely unrecorded, social media is though making the invisible visible allowing events to be quantitatively analysed and understood in new ways.

To stimulate thinking in this area, we have used social network analysis to create a range of measures that allow events organisers and funders to understand and benchmark their events’ impact using data from Twitter. The research, which is published today, analyses how the social network between attendees on Twitter changes due to an event. It provides measures that capture the changes in the network of connections between people at the event, the strength of connections created, and whether they are likely to have arisen anyway. The latter is examined by looking at how close together newly connected participants were in the network that existed before the event. The idea being that people who are closer to each other in the network are more likely to connect without the event.

To develop our approach we used Twitter data from a large tech Festival - LeWeb London 2012. We were able to collect these data because LeWeb published the Twitter handles of event attendees before it happened.

There are several reasons for using Twitter: unless users choose to restrict it, there is open access to the following and public communication behaviour of its users. It offers a rich source of data which would otherwise be difficult to collect without using dedicated devices. It is also widely used by the group we are looking at, many of which are active Twitter users (almost half of our sample is in Twitter). Twitter’s growth also means that, as you read this, around the world, thousands of events are generating a rich source of data on their effects. Data that can be accessed and analysed if organisers know participants’ Twitter handles.

This is not to say that the data isn't without its limitations: we are only capturing a subset of all participants, and only those interactions between them (follows, retweets, replies and mentions) that happen publicly in Twitter.

Even bearing in mind these limitations of Twitter data, our analysis shows the role it can play in helping us understand the connections formed at events like LeWeb.

For example, we find that the rate at which the total follow connections between LeWeb participants rose during the event was over four times the rate at they were connecting with other Twitter users. 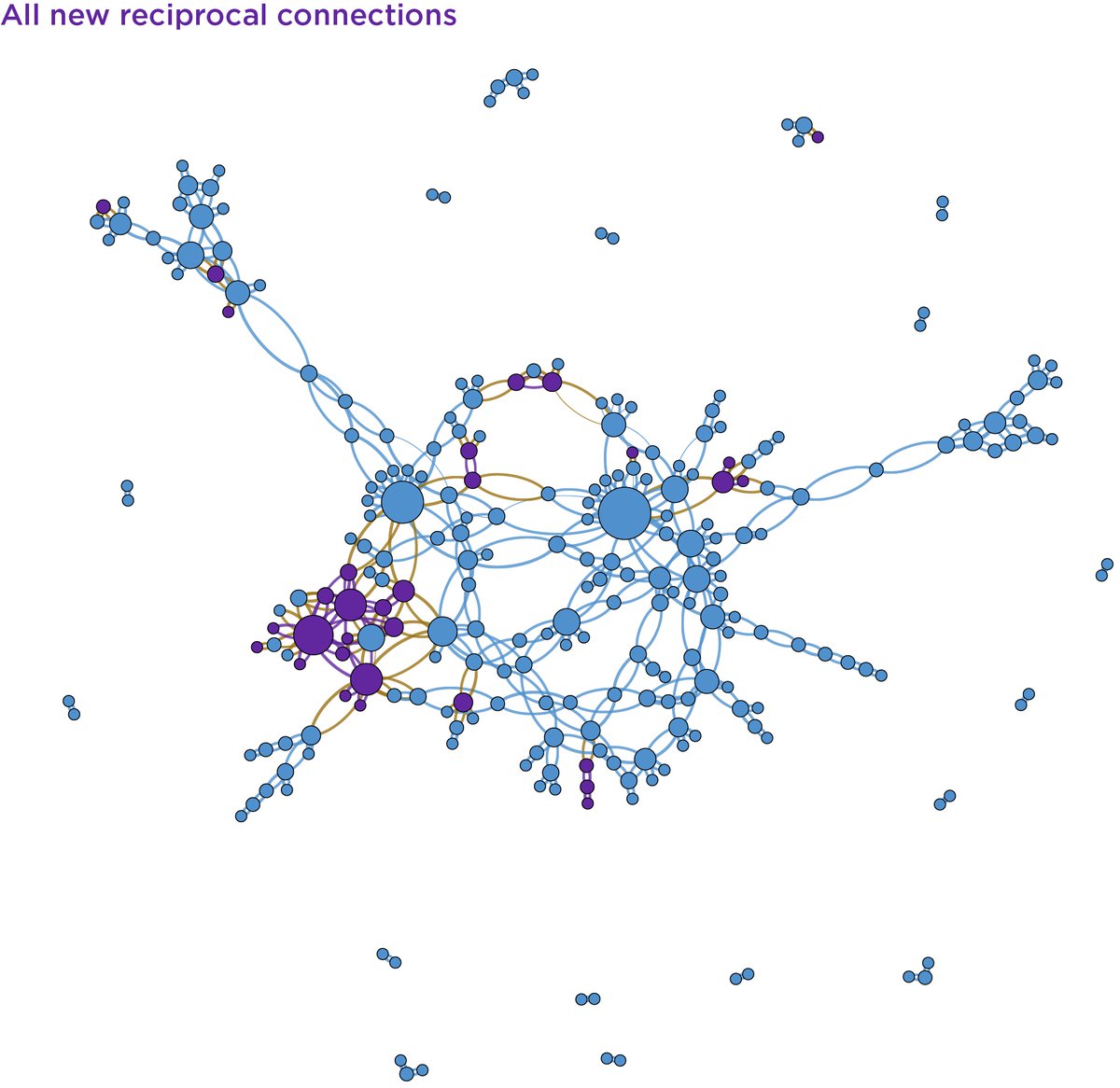 The remaining connections involved individuals following other attendees, who did not follow them back[2] (often, where participants followed a speaker - the brown connections in the first visualisation). The effect of LeWeb London was to make the network between participants denser, and less fragmented. It is possible to quantify this in a number of ways discussed in detail in the report, untangling some of the complexity shown in the diagrams. Many of the participants who connected at the event were “one step removed” (i.e. they had a mutual Twitter connection in common) from each other. However, other new connections were between people further apart in the network, often between those from different countries (Around 70% of reciprocal connections among those unconnected before the event were between people from different countries). Arguably one of the key innovation benefits of international conferences is that they facilitate connections which are otherwise less likely to naturally occur.[3]

Increased analysis of social media data, of the kind undertaken in the report, should be useful for event organisers wishing to understand their events better, to benchmark them against each other, to optimise their social media strategy, and as a result maximise their impact. More information in this area should also be useful for organisations considering which events to sponsor and fund, and, ultimately, for people considering which events to attend, and how to get the most out of them.

Analysis of this nature is some way from being able to directly engineer a meeting that results in the next ground-breaking business, scientific discovery or artistic creation - innovation is more complex than that. This said, greater use of data to understand events can increase the probability that good connections will be made, leading to significant benefits. With large numbers of people attending conferences even small, data-driven, changes in the efficiency with which people network have the potential to increase economic activity and innovation overall.

[3] The study does not examine the outcomes of the connections, although a forthcoming Nesta working paper by the University of Greenwich links event attendance to participants’ activities in the open-source software platform GitHub as a way of assessing this.

John is a data scientist focusing on the digital and creative economy. He is interested in the interface of economics, digital technology and data.

Escaping the City? How COVID-19 might affect the UK’s economic geography

This report explores whether the COVID-19 experience of remote working could boost economies in the UK’s regions by dispersing work from London.