Michael is the Executive Director of What Works for Children’s Social Care.

As Brexit sucks all the oxygen out of British government, it’s easy to miss an important success story. The UK has set up ten What Works Centres (WWCs) to orchestrate the best evidence for frontline professionals and policymakers. They have flourished since the What Works network was launched in 2013, building on the work of NICE (launched under New Labour in 1999) and Education Endowment Foundation (during the Coalition Government in 2011), and they have inspired similar organisations in Australia, Canada, France and Latin America.

Over the last three years, we have seen new Centres covering some of our most pressing social problems, such as children’s social care, widening access to universities, or homelessness. There have been some serious long-term financial commitments, most recently in the form of a £200m Youth Endowment Fund launched by the Home Secretary Sajid Javid to reduce youth violence, including tackling gangs and knife crime, run by a consortium that includes the Early Intervention Foundation, one of the more established WWCs.

However, rapid growth brings with it challenges. With so many new institutions, we can end up tripping over ourselves. The What Works Centres are, by and large, funded by Government. As a result, the landscape of the network comes to resemble the silos of government itself. There are considerable overlaps between organisations’ remits. For example, four of them are focused on youth outcomes: Early Intervention Foundation; Education Endowment Foundation; What Works for Children’s Social Care; and the Centre for Transforming Access and Student Outcomes in Higher Education (TASO).

Another challenge is that the Centres can review evidence inconsistently. There areeighteen different frameworks of evidence across UK social and health policy, such as GRADE, the Maryland Scientific Scale, or the Education Endowment Foundation’s ‘padlock’ rating. And they are growing at roughly two standards a year. 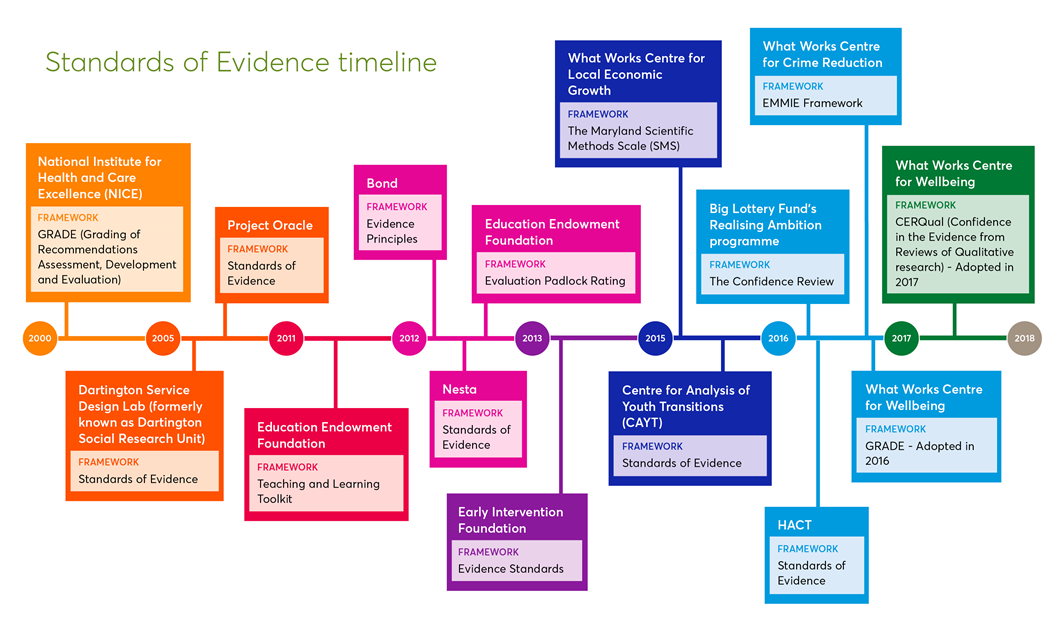 To date, the What Works Centres have not shared a single evidence framework. The only exception is Children’s Social Care, which has joined up with What Works for Crime Reduction to adapt their EMMIE Framework. It can feel like the ‘not invented here syndrome’, with new organisations wanting their own evidence frameworks. Two What Works Centres have reviewed the evidence behind MultiSystemic Therapy and rated it differently on different scales. That can sound a garbled message to the sector. We need to do more to standardise the standards.

Perhaps one solution would be to merge some of the Centres that cover roughly similar terrains – such as children and young people. However, right now, splicing together different organisations is not a good idea as the organic growth and diversity can be a strength. This is a time still to experiment with different formats. It provides a chance to tailor messages to key audiences, such as teachers, social workers, or police officers. It also provides a chance to experiment with different institutional formats and ways of working. Some of the Centres have closed, or never got off the ground, such as in Northern Ireland, or work and pensions. We can learn from those failures just as much as we can learn from successes.

If mergers are not on the table, how else can we make sure we are all aligned? We believe that a big step forward would be to come together in one home – what we are calling an ‘Evidence Quarter’. It’s a shared space for the What Works movement and other like-minded organisations with similar missions. In one geographical place, we can encourage cross-pollination. By sharing office space, we can foster a shared culture of evidence use, collaborate on joint projects, and have a united face to the rest of the world. These ideas aren’t necessarily new – the case for Social Science parks has been made before, along similar lines – but they haven’t before been applied to evidence mobilisation. The new home would do six things:

Provide a home for the What Works movement

By housing the What Works Centres together, we can provide a more permanent home for itinerant centres. Some have had to hop between multiple London offices. What Works Centre for Wellbeing, the Centre for Ageing Better, and Children’s Social Care have been briefly housed in Nesta’s London offices – but only on a temporary basis, and have now moved on. More certainty of location is needed, and there are benefits of having proximity to peers, such as opportunities to learn and share common problems – from technical evidence issues, to governance and politics, or the effective communication and implementation of evidence. The Quarter will allow colleagues from different WWCs to see each other and to talk and socialise daily, rather than infrequently.

As well as the economies of scale of being in one place, compared to multiple smaller rental contracts, the Evidence Quarter can act as a place to attract the best academics, authors, politicians and thought-leaders to be guest speakers, and welcome some of the relevant social science investments by the Economic and Social Research Council, Nuffield Foundation, Wellcome Trust and others. We would also provide hot-desks, roundtables and partnerships with Scotland, Wales and Northern Ireland. Excitingly, Cardiff is about to become the home of one of Europe’s first Social Science parks (SPARK), housing Nesta’s Y Lab, the What Works Centre Wales Centre for Public Policy, and other key players in the innovation space. The EQ could partner with SPARK to promote cross-UK learning, perhaps making SPARK residents associates of the EQ, and vice versa. EQ could fund fellowships which give WWCs a chance to spend time at other Centres and other evidence organisations (e.g. at SPARK) to encourage cross-fertilisation. The EQ will seek to encourage collaboration by convening specialist cross-cutting groups and task-groups, or run joint funding bids or reviews together.

The shared location can also provide back-office to support multiple organisations with events, HR, finance, IT, comms, design, and data protection. There is considerable inefficiency in each WWC separately commissioning a range of services. We believe that the EQ could provide a core of shared services and substantially increase the efficiency of the network. Other possible shared physical facilities could include data storage and access, videoconferencing, secure internet, meetings and events space. Alongside the advantages of shared back office services, there are other pieces of infrastructure that could be shared between WWCs and administered by the EQ, including: peer review, academic associates, framework agreements for evaluation.

The Evidence Quarter can also help fledgling new institutions. New What Works Centres are being established all the time. Many of these need to go through an incubation phase before becoming fully fledged WWCs. Between the EQ’s partners, there is considerable experience in setting up and developing WWCs, and so the EQ should be well placed to both undertake this task and to secure funding to do so.

There are also a growing number of “movements” – in education, in teaching, and nascently in children’s social care. By bringing these organisations physically into the fold, we help make them tangible for their members.These movements have proven hugely successful run on a shoestring, and could be even more so with access to a small amount of dedicated resource. Other like-minded organisations, such as the grassroots evidence movements like ResearchED for teachers, or the Society for Evidence-Based Policing are overly reliant on volunteers and goodwill, often managing their organisations from a kitchen table. They punch above their weight but need extra support to get onto a more sustainable footing. We want to provide that footing through the EQ.

To begin with, the focus will need to be domestic. But longer term our ambitions are international. The What Works movement is an increasingly global affair. The Evidence Quarter would provide a landing point for overseas WWCs when they visit. We could jointly engage with international partners, and seek potential co-funders for trials and reviews. Most of the evidence reviewed by the What Works Centres is international – particularly from the US (which is also criticism – can we trust that evidence based on American high-school graduates travel elsewhere?).

In future years, there could be value in countries, cities, and professional bodies clubbing together to commission experiments and systematic reviews. Funding for randomised controlled trials could be pooled from multiple countries, as has been done by the Innovation and Growth Lab at Nesta, or for systematic reviews by the Campbell Collaboration. Multi-armed trials in multiple countries – say in Australia, Canada, France and UK – might help us find out if things are relevant in different contexts, not just one location and time. There could be an international clearing house for evidence, adapted to local and national needs – such as communicating findings relevant to local policy contexts, as the Education Endowment Foundationteaching and learning toolkit has been adapted to Australian, Scottish, and Latin American educational contexts.

The Evidence Quarter is not the only way to join up the What Works movement. There are other important players. The What Works Team at the Cabinet Office provide a coordination function, and influence across Whitehall, especially through the substantial soft power of its head, David Halpern. The Cabinet Office can help (gently) bang heads together, through convening groups like the What Works Council. Joint projects are also helpful, and the Economic and Social Research Council has a ‘strategic fund’ to help What Works Centres collaborate. There are many other fine examples of bilateral partnerships – such as the reanalysis of Education Endowment Foundation data for the What Works Centre for Children’s Social Care. However, more can be done. And a geographical home for the movement is a way to step up onto another level, consolidating our successes, and working together for bold plans for the future . If you are interested in joining, contact us.

Michael is the Executive Director of What Works for Children’s Social Care. 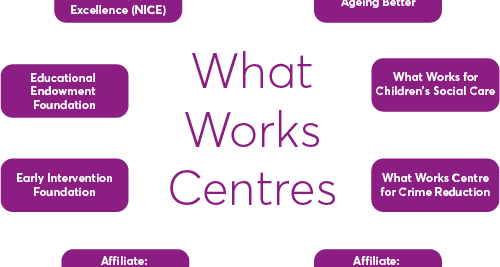 Celebrating five years of the UK What Works Centres

Jonathan Breckon (Alliance for Useful Evidence) and Geoff Mulgan (Nesta) provide a potted history of the UK What Works Centres, as they near their 5th anniversary.