In the face of an unprecedented crisis, hundreds of projects have arisen using technology to improve the journey and integration for refugees. Here are five of them.

The European migrant crisis, which has been going on since 2015, has become one of the defining events of the decade so far. Millions of migrants and refugees have arrived in Europe from countries in the Middle East, Asia and Africa, especially Syria, Afghanistan, Iraq, Nigeria and Somalia.

The political response to the crisis was inept and insufficient, although some countries (particularly in Scandinavia, as well as Germany and Austria) took bold steps to welcome large numbers of new arrivals and to try to integrate them. Refugees and migrants face challenges from the very beginning of their journey and well beyond it as they settle in a new country, learn a new language, familiarise themselves with a different culture and try to find employment.

The sudden emergence of the refugee crisis and the significant press coverage it received led to a huge amount of activity from 2015 onwards. Innovators across the continent, as well as refugees themselves, have tirelessly worked to improve the journey and integration process. This itself has had challenges, such as a large amount of duplication of efforts.

Technology has enabled rapid and radical responses to the refugee crisis, using everything from simple social media to cutting-edge technologies like blockchain to improve the lives of migrants at all stages of the migration journey. Below are five of them.

MeshPoint is an open-source portable wifi hotspot specifically designed for disaster and outdoor areas. It is a machine that can fit in a backpack and provide internet for up to 450 people in places such as refugee camps. Not only can refugees therefore access the internet, but it also allows humanitarian organisations to set up communication infrastructures much more quickly and efficiently than in the past. It is built to withstand heat, cold, rain, and snow, making it suitable for a range of climates and environments.

The Meshpoint wifi hotspot is fully open-source and can be made using digital fabrication tools.

WhatsGerman is a tool for refugees and new arrivals in Germany to learn the country’s language through WhatsApp. It provides a daily lesson through the app, teaching basic language, grammar and phrases. It is provided free to refugees and intended to teach the absolute beginning of language acquisition to prepare language learners to progress onto other courses.

There are thousands, if not tens of thousands, of support services available to refugees in Germany. It is impossible for anyone to know all of them and navigating them can be challenging. clarat is an online directory that provides refugees with a tool to find the right services for them, while also giving those running services, policymakers and funders a better overview of the landscape. Originally founded as a directory of youth and family services, it has been working on the refugee service directory since 2015. Fully funded by a charitable foundation, it has been able to invest in a high-quality product: it is supported full-time by developers and features include simple language that is specifically tailored to work well with Google Translate, for example.

Hack Your Future: Supporting refugees into employment through coding (Netherlands)

Hack Your Future is a coding school for refugees in the Netherlands, which aims to equip them with the skills to gain meaningful and well-paid employment as software developers. The six-month programme is supported by 40 developer volunteers who support refugees once a week in person and during the week online. At the end of the programme, the refugees are linked to businesses and guided towards employment. 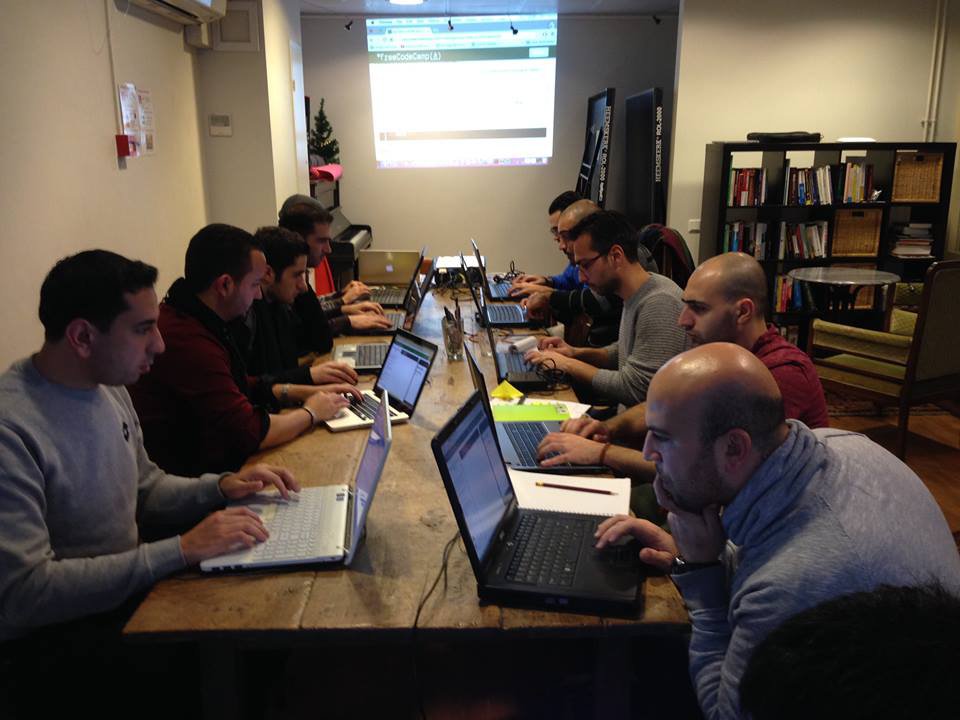 Refugees learning coding at a Hack Your Future class.

AID:Tech is a Irish-British startup which uses blockchain technology to bring social and financial inclusion to everyone. It uses the technology to issue digital identification to people (including refugees) quickly, transparently and efficiently. This means it is easier for refugees to access services like healthcare, education and banking, even if they do not have papers and documents. Furthermore, it is secure and allows instant and fully traceable transactions, increasing transparency for aid donors. In its first pilot, AID:Tech delivered $10,000 to Syrian refugees in Lebanon through vouchers linked to the blockchain. When the refugees spent the money on the vouchers in the local supermarket, the partner aid agency, the Irish Red Cross, could monitor every transaction in real time.