How are MPs and candidates using Twitter in the run up to the General Election?
17 March 2015
3 min read

The Westminster Twitterati is out in force, but some MPs are more social media savvy than others. Differences between UK parties are becoming clear in the run up to the General Election, and the fertile debating ground of social media is turning into a battlefield.

We're using the Political Futures Tracker to look at how MPs and candidates are taking to Twitter, where they are using it and what they are talking about – we will take a unique view into the maelstrom of social media in the run up to the election. This will give us an insight into what MPs are really talking about. We know that people are influenced by social media, and that particularly young people feel that social media will impact how they vote. We will cut through the rhetoric and rigmarole of the Commons, and get down to brass tacks on this issues that sculpt our political futures.

Last month the Lib Dems topped the charts, with the most content, including retweets and replies. Interestingly, both Labour and the Conservatives are relatively low on the charts given their supremacy in the polls and, for both parties, over half of their posted content is made up of retweets – perhaps reflecting this popularity.

The Lib Dems top the charts, but the challengers are not far behind 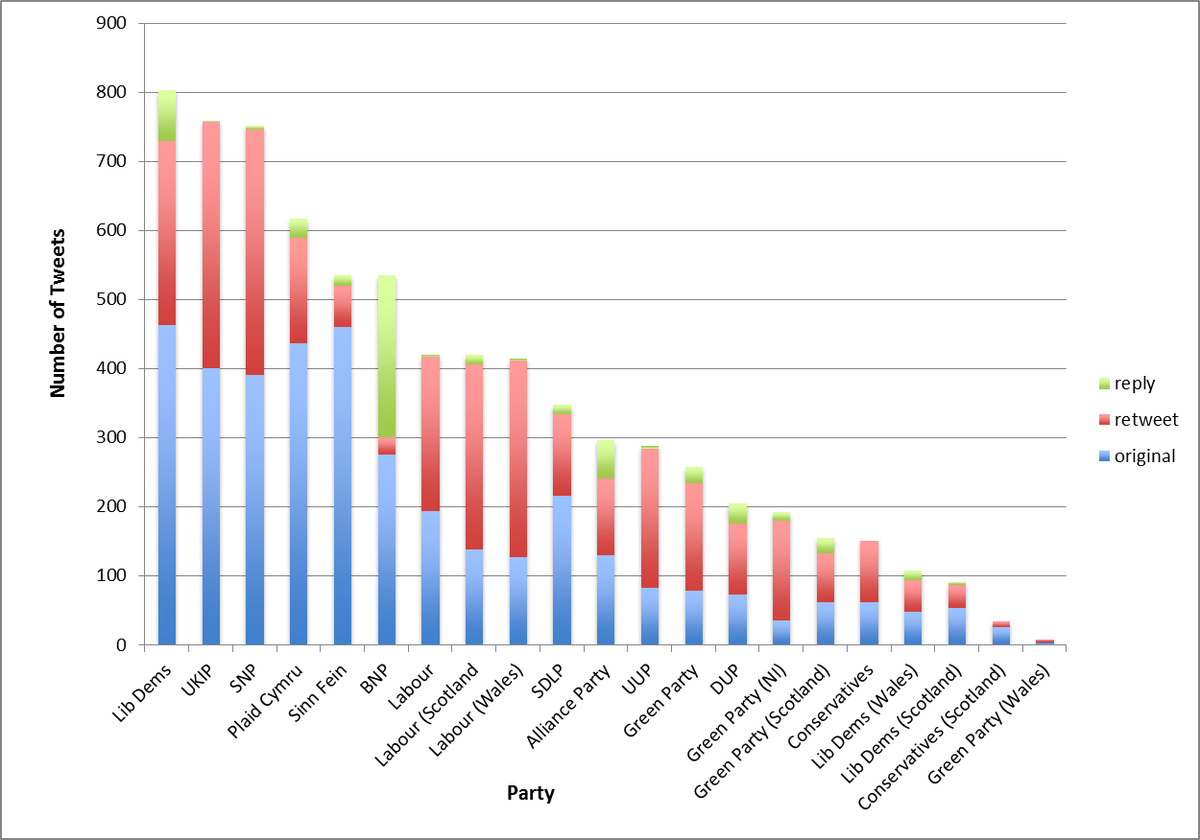 Number of Tweets per party (official accounts) over the past month

This may reflect the use of Twitter based on the position of the parties. Challenging parties, such as UKIP, the SNP, Plaid Cymru and Sinn Fein may be more likely to use social media as an outlet for their political messages, where resources are scarce and messages are strong – confronting the established political system using cheap, ubiquitous tools.

Number of Tweets per party over the last week 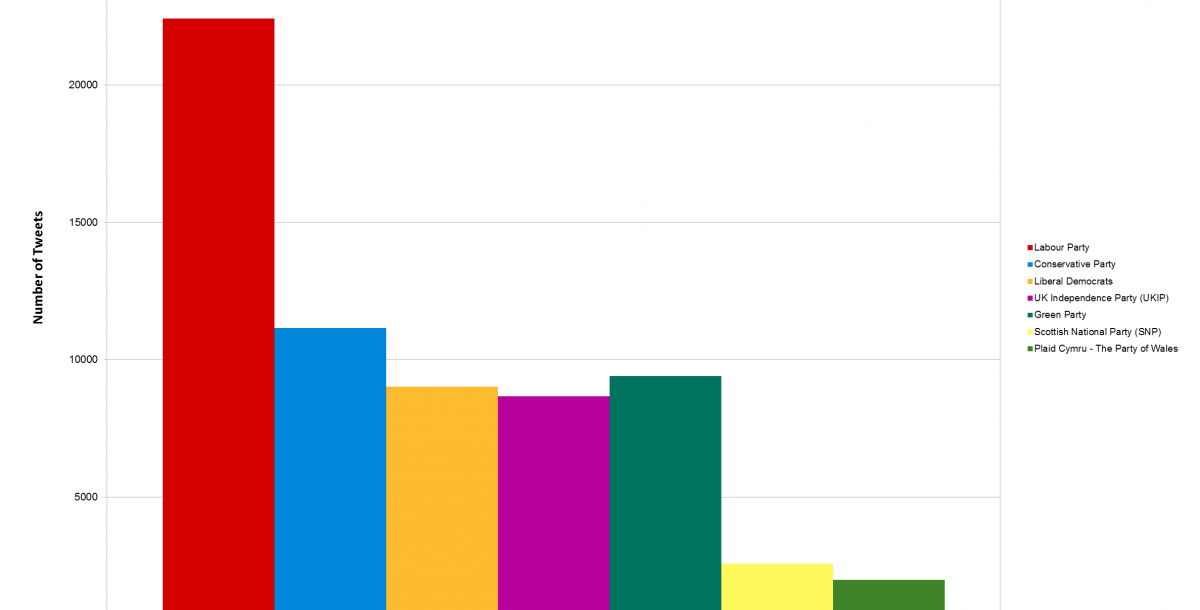 Last week the Labour Party came top, but as we'll see later, this story changes if we delve into the data in more depth ...

Interestingly, we often associate Twitter use with the young upstarts, but in fact, when looking at the age distribution of UK MPs by party, we can see, by some measures, that the Labour party is not only most Twitter prolific, but also oldest - with the flattest age distribution - as can be seen below.

Age distribution of MPs per party 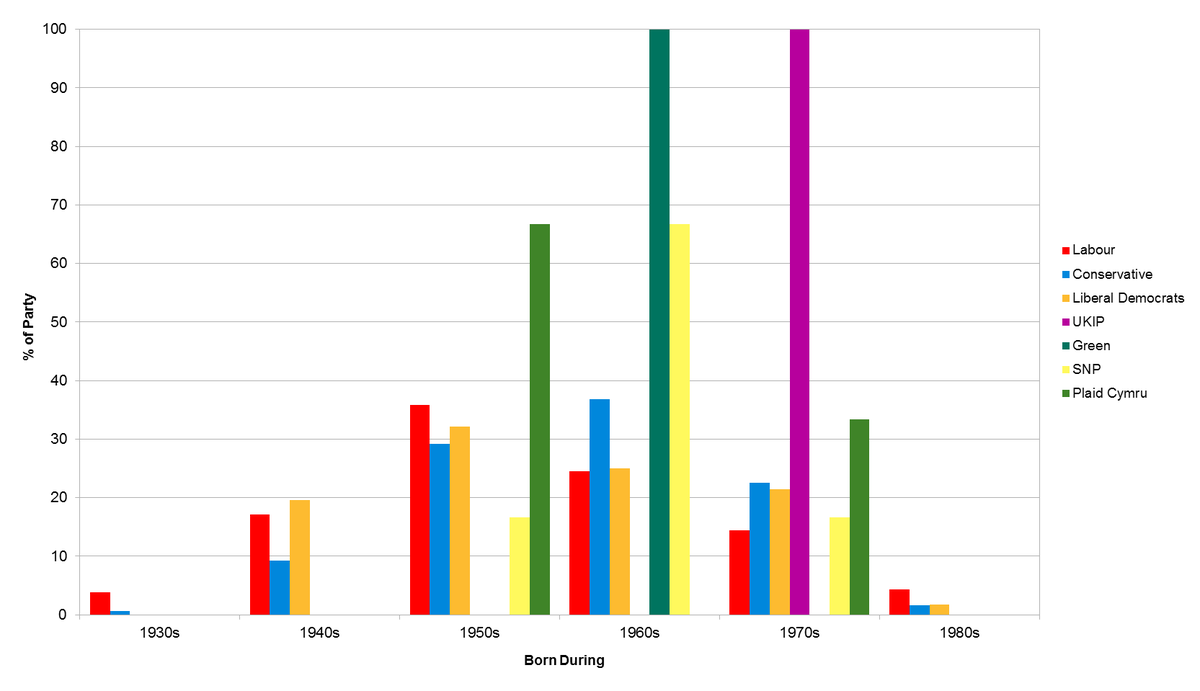 It turns out the silver surfers are taking to Twitter in the pre-election social media frenzy.

Average age of MPs by party 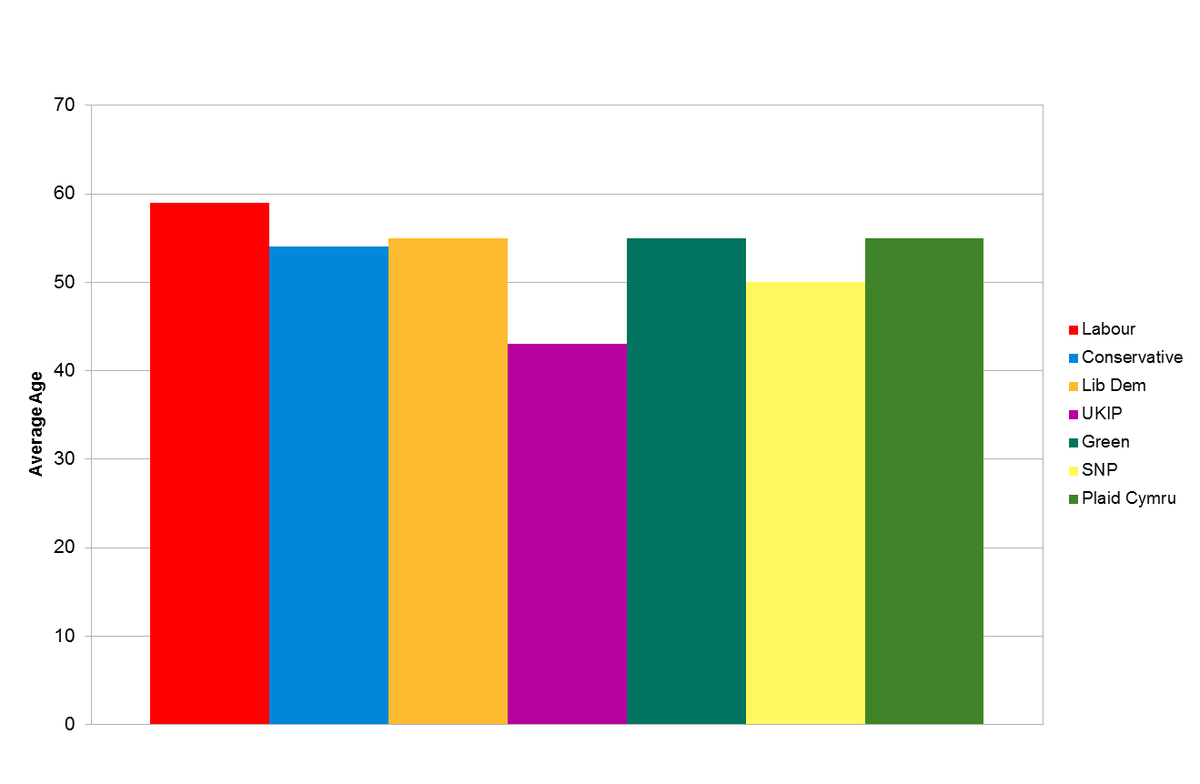 But the problem with grouping by parties is that it doesn't take into account the number of people actually tweeting. So, for example the Labour party has 206 MPs who tweet, while the Greens only have one. If we normalise the tweet counts by dividing the raw Tweet counts by the number of Tweeters, a very different pattern emerges. 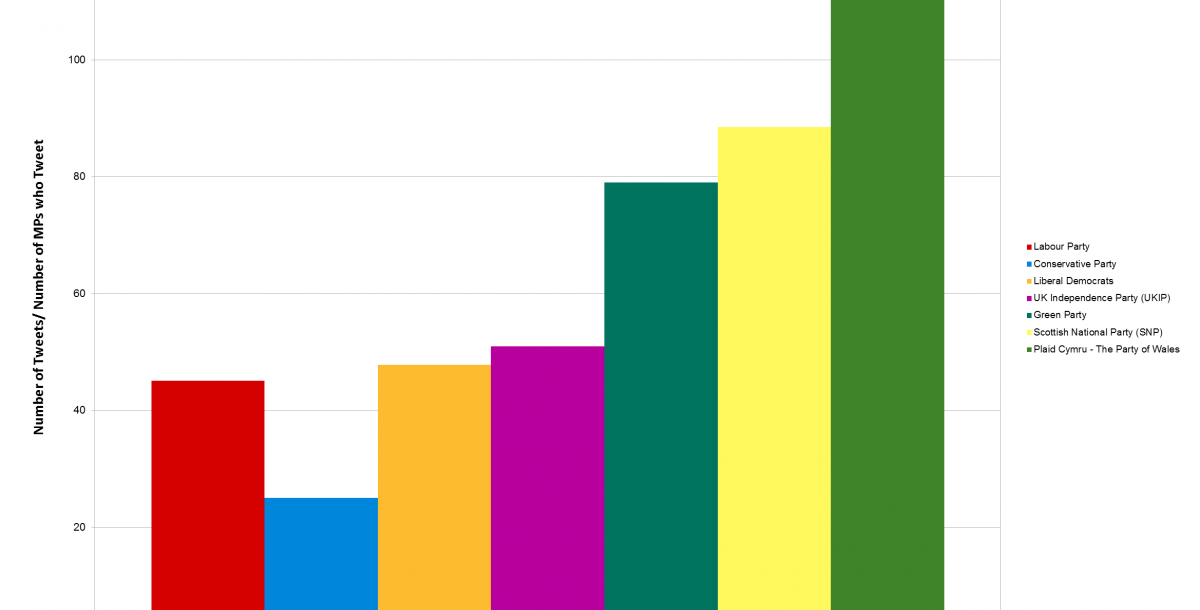 We see that Labour and the Conservatives slide right down the ranks and the likes of the SNP and Plaid Cymru top the chart ...

...which suggests that there may be, in fact, more to gain from being the challenger on social media, or this is simply a question of resources ...

...talk is cheap - particularly on Twitter, and time is more likely to be in abundance for those on the political side lines. 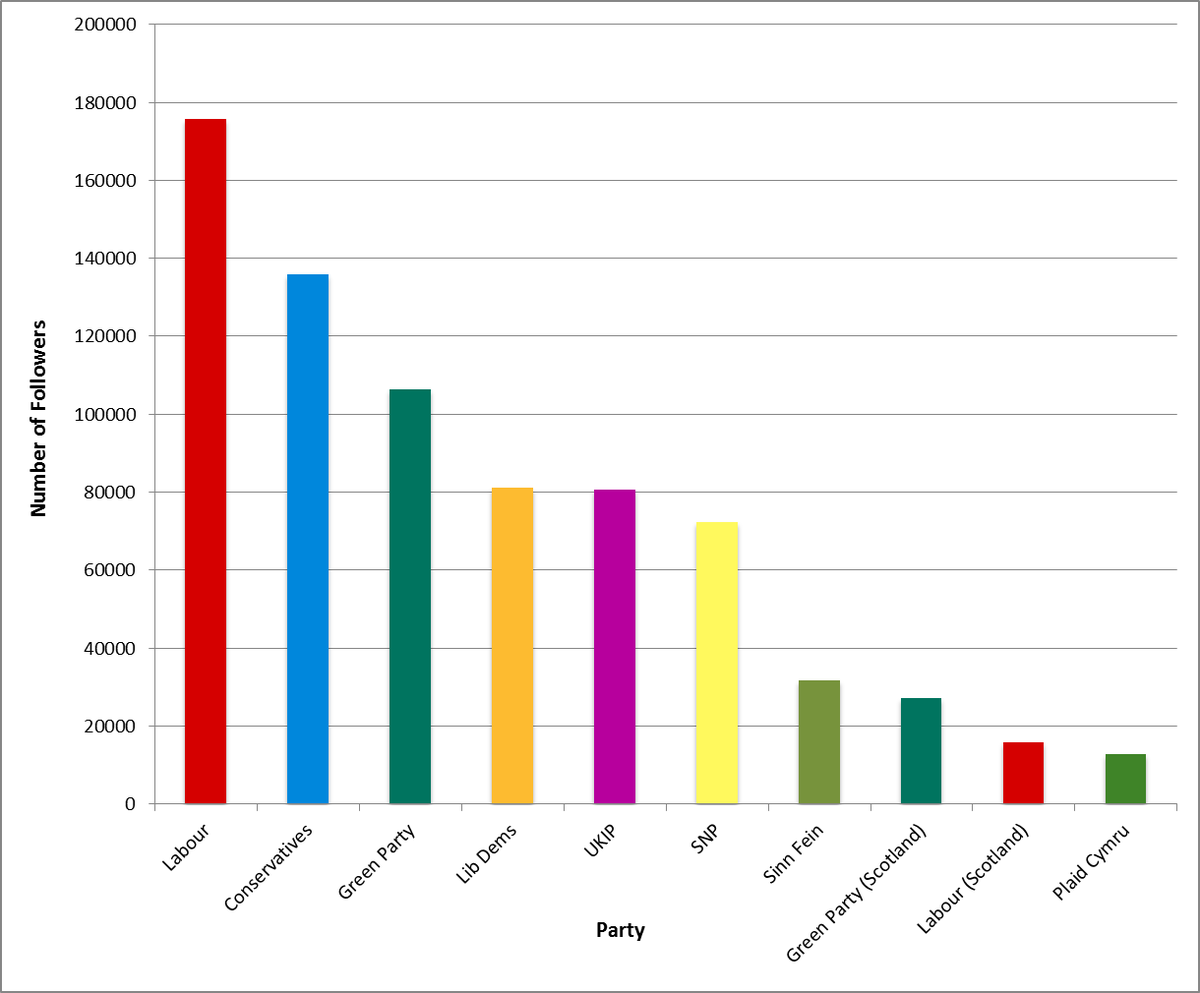 David Cameron has over double the followers of Ed Miliband, and we see a long tail of follower numbers for other MPs. But, across the board Labour performs well, with 11 out of the top 20 places in terms of follower numbers, and the Conservatives take up a quarter of the top 20 positions. This is reflected in followers of official party Twitter accounts, with Labour and the Conservatives leading - followed by a few larger challenger parties and a long tail of smaller, more niche or peripheral parties. 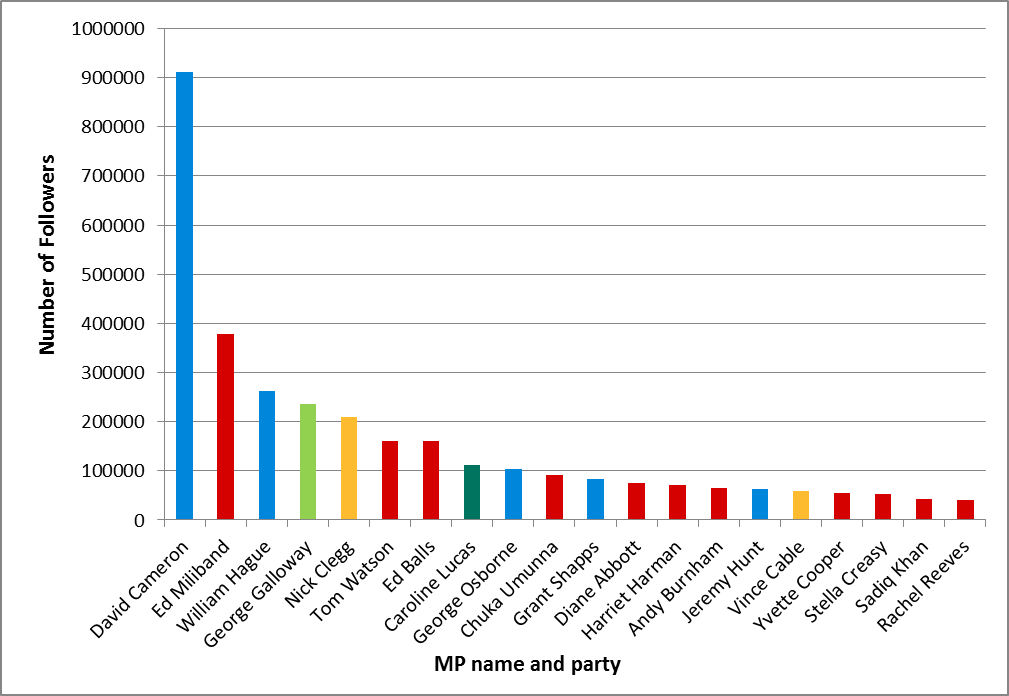 Read the background to the Political Futures Tracker here, and look out for regular blogs running up to the General Election in May.