The main findings from Engineroom's workshop at the NGI Forum
Monday, 24 September 2018
In Futurescoping
5 min read

When 150 people made their way to the NGI Forum 2018 in Porto on 13 September, they were not expecting to make tricky decisions about weaponised fridges, defensive measures against bots attacking democracy and 'generous' offers of free educational tech for schools.

Yet this is exactly what we asked them do in our own workshop, scheduled for the sunny afternoon. We want to articulate a new vision for the internet as part of Engineroom. Central to this vision are the values Europeans want to see reflected in the way the internet works. These values include privacy, trust and unlocking the promise of data for the common good. However, realising all of these values is difficult, because some of them are in conflict with each other and because we need to decide where to focus our energy. We ran our workshop to get participants in the forum to think about these issues and gather their insights, which will help inform our own thinking about the future internet, and the values it should champion.

Highlights of the day included a speech by Pearse O’Donohue, Director of Future Networks at the European Commission, who reaffirmed the need for an internet built around values. He argued that setting rules online is necessary, but that citizens also have to get involved. Afterwards we heard five interesting experts talk about their efforts to understand and improve the internet. The talks featured possible uses for the blockchain beyond a 'currency' mainly used for speculation, and integrating the internet into public transport and other moving systems. Virginia Dignum, professor at Umeå University, Sweden, spoke about the future of responsible AI. She quickly dismissed the idea that AI will take over the world, pointing out that AI so far is extremely narrow and limited. She also raised the thought-provoking idea of autonomous systems such as cars being build based on different systems of ethics, resulting in Kantian or Utilitarian cars, which act to respect all life always or weigh up different outcomes by the harm involved.

Our own session was an interactive workshop, in which we tested the mechanics of a board game we are developing as part of the Next Generation Internet project, which will help players imagine their own preferred future internet. 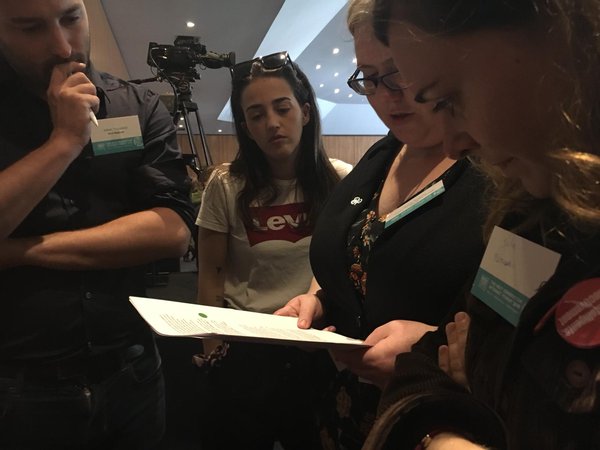 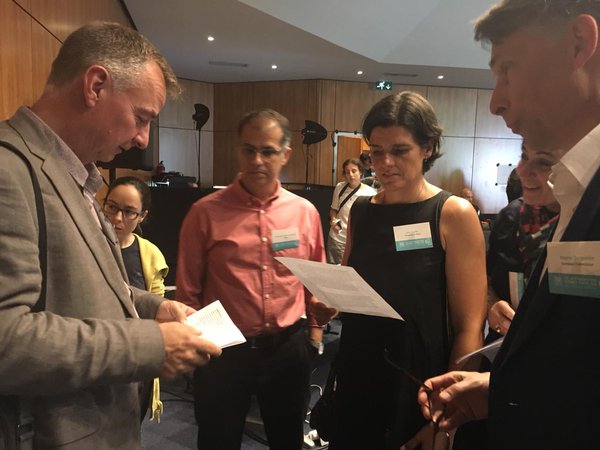 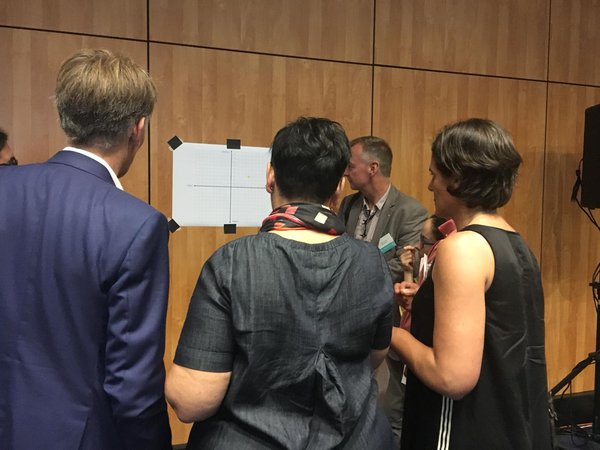 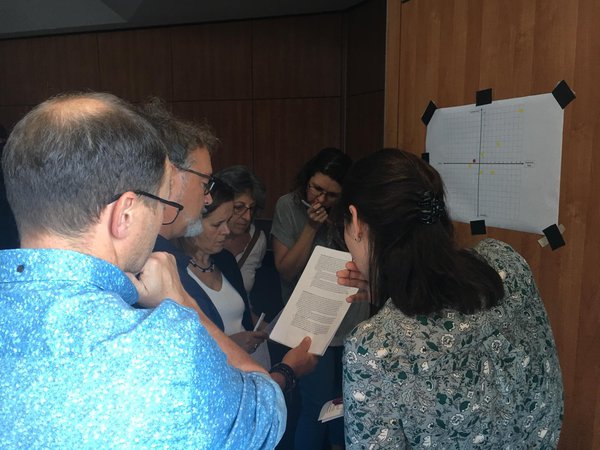 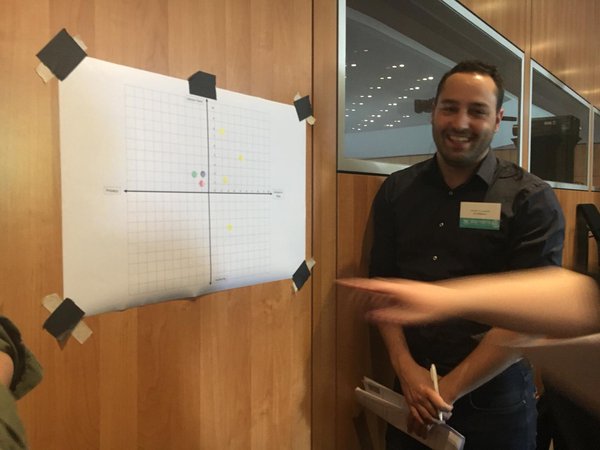 This game forms part of a wider trend of work inside and beyond Nesta: Using board games as tools for policy and engagement. Games are a great way to engage people in complicated issues, start conversations and help them to step into different roles. My colleagues, Florence and Tom, have written about the use of simulation and games and about Innovate!, a game Nesta and Digital Liberties developed. Serious games can also be digital, such as Uber - The Game made by the Financial Times, which gives players a look into the life of an Uber driver. Serious games are a growing trend to engage both specialist and lay audiences and allow them to learn about complex topics.

Back in Porto we had prepared a game for our participants to play. We gave groups six scenarios, each with two possible solutions. Crucially, neither solution was entirely desirable and a compromise between 4 values had to be found. This is an example of one of the scenarios: 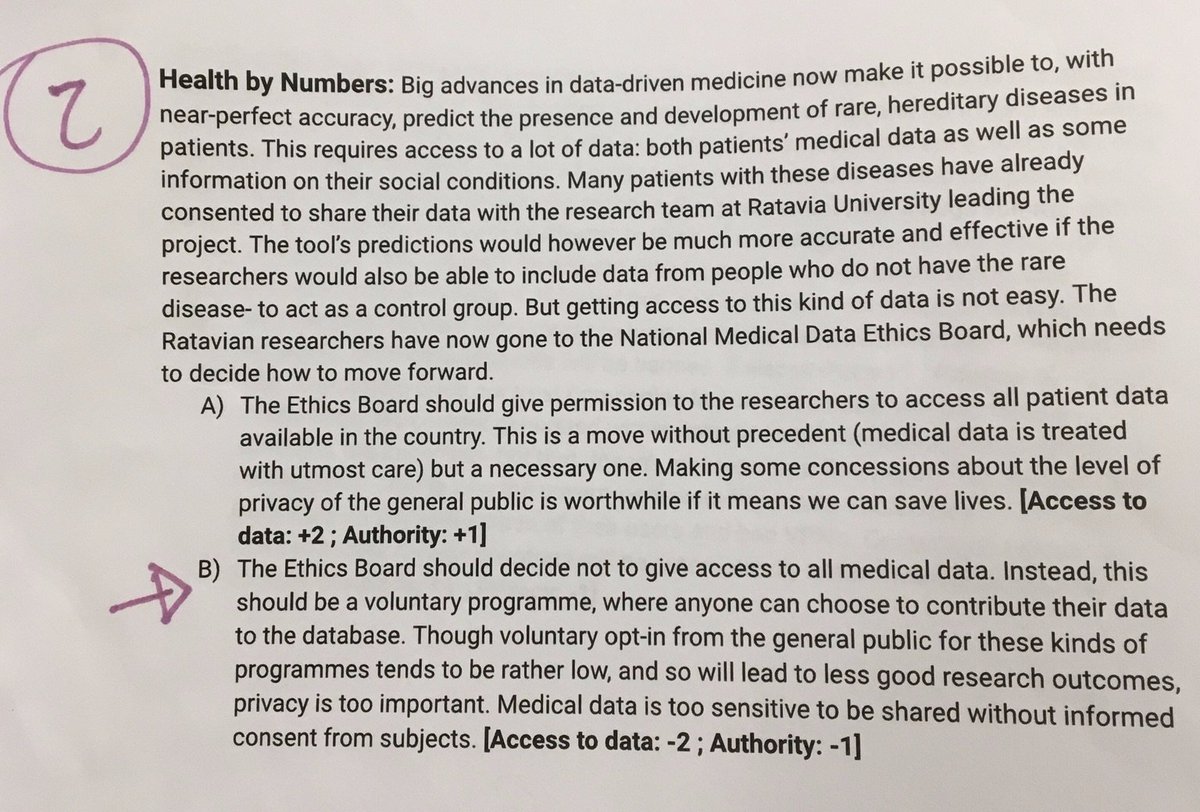 The main purpose of the exercise was to show people that choices about the internet often sacrifice desirable things for others. In choosing between options A and B, players had to accept that to get a benefit or avoid a harm, they needed to 'pay' a price.

Practically, participants track their choices on a grid by recording the numerical values we assigned to options. We built the grid with two axes between 'complete' privacy to open access to data and from strong government authority to laissez faire. Players recorded by placing dots on the grid. Unrealistically, all groups started 'from 0', so from a balance between all four values. We also asked participants to mark their personal position on the chart, so we would know what they would choose in an ideal world. 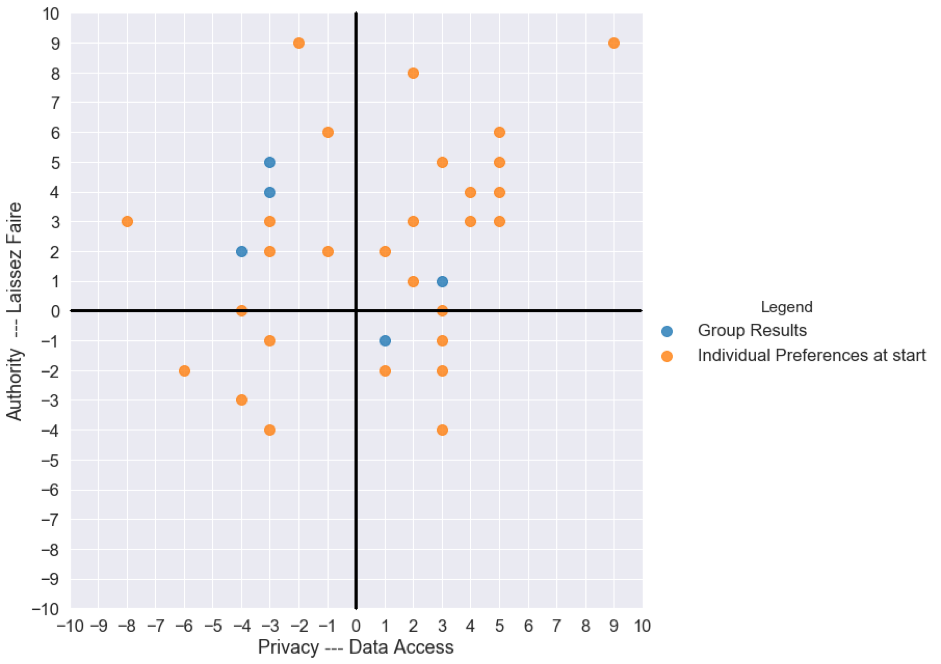 Our workshop generated some very interesting results, pushing our participants out of their comfort zones and sparking lively debates. We walked between the groups to listen into their discussions and gather their feedback. We also gave participants worksheets on which they recorded their opinions about the game. Players quickly realised that the scenarios had no 'good' options, requiring players to accept at least some negative consequences either way. They also made suggestions on how dilemmas could be defused, for example by collecting data but making sure it is anonymised sufficiently.

Participants pointed out specific elements which should be part of decisions, for example more information about the effects of their choices or the likelihood of the events described. Similarly, people made fairly strong value judgements, for example stating that “fake news cannot be controlled online and educating the population is the only way”. The general trend across groups strongly favoured privacy over access to data. Below is a summary of the results, with the participants' individual starting positions in yellow and the final position of the groups in blue. The blue dots therefore represent the group consensus on the 6 scenarios.

Where we are going

As mentioned, this exercise is part of our ongoing effort to develop an NGI board game which will allow players to imagine different possible scenarios for the internet of the future. The concept of the game, tentatively called 'The Consortium' is for players to represent different stakeholders playing a key role in shaping the future of the internet as part of a consortium making key decisions for the future of technology, business and regulation.

We are currently playtesting this game at Nesta, building on the experience from other serious games and incorporating what we learned in Porto and elsewhere. We plan to develop two versions of the finished game: A simpler, version which is easier to understand and play for workshops and engagement exercises and a more complex, strategic board game, which we will make available online. Below you can see an early concept of the cards, with descriptions and little icons for the five values they affect.

If you want to get involved, learn more about our work on simulation and games or suggest some features (and cards) for the game, please get in touch via the comments. We look forward to hearing from you.

Thanks to Chris Haley, who gave a great introduction to Engineroom and Carolina van den Berg, who supported the planning and running of the workshop and took the photos above.