A full Edinburgh International Conference Centre this week suggested that the National Performance Framework was more than just another government document.

This week the Scottish Government launched its National Performance Framework (NPF). So far, so geeky, but a full Edinburgh International Conference Centre suggested that this was more than just another government document, strategy or framework. The most important message from the day was the commitment by government to a wellbeing approach, and the alignment of all government activity to the aim of increasing wellbeing. It sets the purpose of the Scottish Government as “to focus on creating a more successful country, with opportunities for all of Scotland to flourish, through increased wellbeing and sustainable and inclusive economic growth.”

To that end the government has agreed 11 National Outcomes, covering all areas of government activity - from community safety to the environment and the economy, represented in the image below: 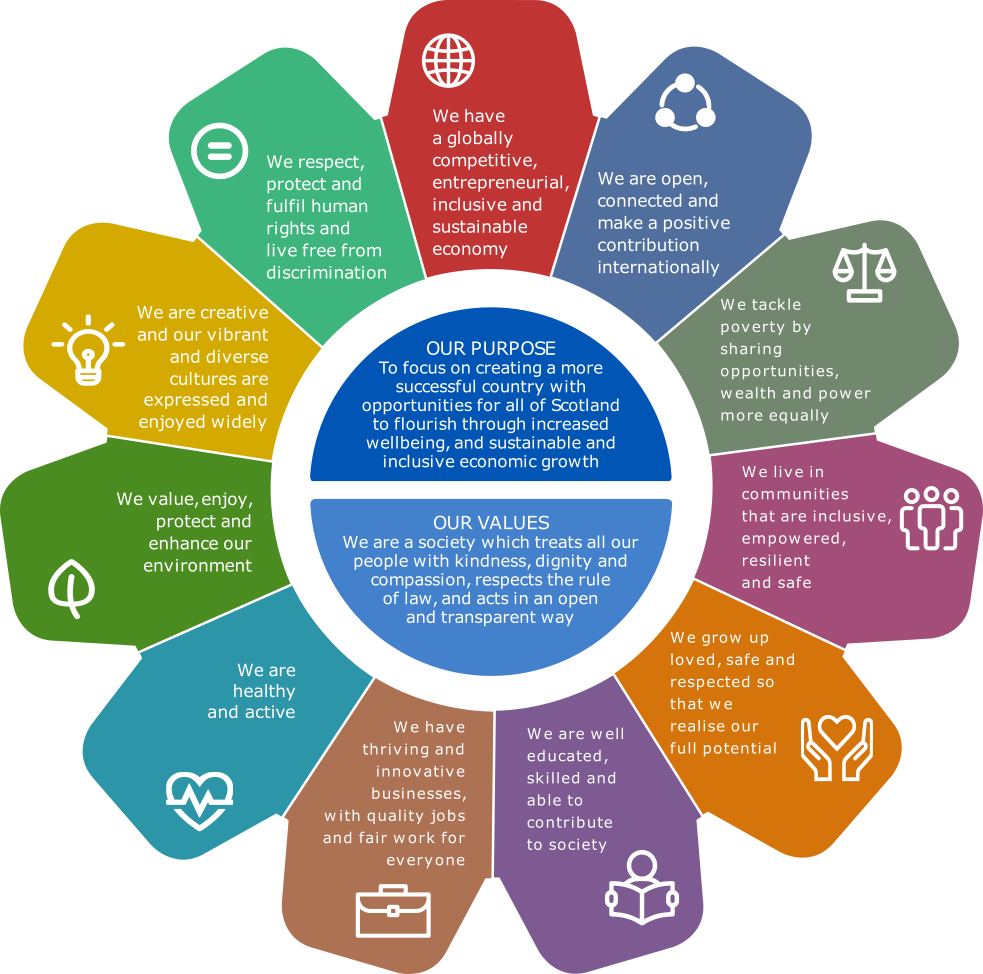 The Performance Framework has the feel of a logic model. It moves from a purpose, illustrated with 4 values (kindness, dignity, compassion, the rule of law and openness and transparency) through to national outcomes, which are thematic but overlapping. These are then measured using national indicators. The national outcomes are aligned with the UN Sustainable Development Goals, placing the Framework in an international context. The National Performance Framework was placed on a statutory basis by the Community Empowerment Act in 2015, and this provides an interesting home for an overarching approach to government, that we might normally expect to sit in a more general governance act. It is the most significant manifestation of the shift from government focused on delivery, to government focused on participation - where the role of the state is to involve citizens in the design and creation of society, rather than on the twentieth century focus on delivering services.

The attendance list covered the length and breadth of civic Scotland, reflecting the buy-in to a national outcomes approach. The speakers included both the First Minister and the Permanent Secretary of the Scottish Government, as well as international speakers from both Canada and Slovenia. Most interesting is the common commitment to this approach across sectors, and even unanimity of the Scottish Parliament’s political parties.

The first NPF was created in 2007, following the creation of Scotland’s first minority government. It coincided with a redrawn relationship with local government that shifted from a ‘ring-fenced budgets’ approach to one based on outcomes. In the refresh of the Framework, the central national outcome has become increased wellbeing. This reflects a broader trend in public policy away from the centrality of economic growth and towards wider measures of social progress, manifested in the UK government’s publication of a wellbeing indicator.

This iteration of the NPF has benefitted from substantially more public engagement than the first NPF, which again reflects a shift in attitudes to how government should involve citizens. From the Fairer Scotland consultation to the extended work done on the document by the Carnegie UK Trust it has benefitted from greatly increased citizen involvement. It is interesting to speculate about how this more engaged approach has helped to widen the acceptance of the approach by civil society and political parties.

One interesting aspect of the NPF is the actions that will need to be done to identify how the national outcomes relate to the national indicators. This was one of the weakest elements of the previous model, and the obvious gap in this model is how we move from the agreed and desired outcome to changing the national indicator. This will be the work of the next 5 years - and the lacuna is not all bad. The 2009 Climate Change Act target of 42% relied on a Europe-wide emissions trading scheme that did not happen. The target was reached through steep reductions in the price of renewable power. We must avoid the constraints of the public policy imagination becoming the limits of possibility for our society.

The National Performance Framework is an excellent distillation of much of the latest thinking in government innovation. It brings together citizen engagement to identify social outcomes, it aligns with similar international frameworks - especially the UN Sustainable Development Goals, and most importantly it has almost universal buy-in. In a world where governments are seeking new ways to involve society-wide actors in designing and delivering social change, it gives us a clear opportunity to assess this approach to government.

There are opportunities to learn from some of the Nesta work on small nations, and also to promote the example to other governments considering a similar approach. The ongoing participation of citizens will require opening data sets - with the opportunity to create visualisations of social progress. As we move to a data rich society, so it becomes easier to develop more universal models to assess and participate in public policy. And through public policy we can create a society that meets many more of our aspirations.