Some reflections from NewCities "Crowdsourcing the City" conference
Tuesday, 01 May 2018
In Government innovation
3 min read

The DSI4EU team attended Crowdsourcing the City last Tuesday, an event organised by NewCities in London that gathered policy makers, civil servants, urban planners and activists together to discuss the possibilities and experiences of using civic crowdsourcing to develop and enhance public spaces and communities.

Over the course of the day, we heard from a myriad of inspiring organisations using digital social innovation (DSI) tools to engage with citizens and encourage urban participation and development. Jean Louis Missika, the deputy mayor of Paris, shared lessons about their participatory budgeting programme, through which citizens will discuss and decide how to spend €500 million of the city’s budget over five years (read more about the initiative here). The City of Madrid is also using DSI to open up local level planning and policy decision making to citizens through the Decide Madrid platform, leading the way in participatory democracy since 2015 (we have also explored this initiative in more detail here).

Aster van Tilburg, the co-founder of NGO Voor Je Buurt, shared how civic crowdfunding can help raise funds for local projects across neighborhoods, villages or cities in the Netherlands. On average, campaigns on Voor Je Buurt have an 80 percent success rate. In London, meanwhile, Studio Octopi raised over £63,000 through Spacehive for a community development project that plans to restore the Peckham Lido in South East London. 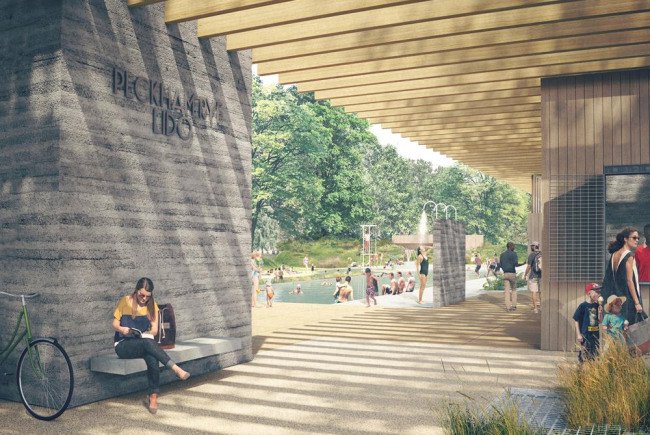 Spacehive's plans for the Peckham Lido

Beyond hearing about these inspiration initiatives, we enjoyed witnessing a lively conversation that went beyond exploring the potentials of using crowdsourcing as a tool for urban development, and also debated some of the challenges that policymakers and practitioners are facing in ensuring that urban development processes are fair and inclusive.

These challenges align with some of the findings that we explored in our 2017 report, What Next for Digital Social Innovation?, namely the difficulty of delivering social impact that is inclusive, at scale. Below are three lessons from last week’s conference that illustrate some of the current debates around inclusive crowdsourcing:

Trough our work mapping DSI and understanding the opportunities that come with using technology for social good, we have found time and time again that DSI holds incredible potential for promoting participatory democracy. However, as last Tuesday’s discussion highlighted, crowdsourcing is not inherently democratic. Crowdsourcing provides opportunities for democracy, as it opens up decision making to citizens and can give previously underrepresented groups a voice within their communities, but, as an audience member pointed out, it doesn’t always promote inclusive participation, as some communities will always benefit more than others and some people will always be able to participate more than others. Put simply, as one audience member asked, does crowdfunding put more civi power into the hands of those with more financial power? This is a question which we need to explore further and which could be extended to all types of crowdsourcing.

As participants in crowdsourcing processes need to be digitally savvy, some segments of the community are automatically excluded, and we need to work to ensure that all citizens have the digital skills they need to be able to engage with these processes for them to be truly democratic. There is a significant amount of work being done to improve digital inclusion by organisations across Europe (check out All Digital to find out more) and in civic spaces such as libraries, but we still have a long way to go.

Women, ethnic minorities and people with disabilities are still largely excluded from debates and discussions in the tech and digital worlds, although there have been considerable efforts to address this disparity. As Helen Goulden, CEO of the Young Foundation, pointed out, “the ‘crowd’ is almost certainly not representative either in terms of who contributes or who benefits from what these tools and platforms have to offer. That doesn’t make them bad, of course – but it does make them incomplete. And so continually striving towards more inclusive forms of participation is a task not to be ducked.”

There is some evidence that some forms of crowdfunding are in fact quite diverse; for example, in Nesta’s recent study on matched crowdfunding we found significant diversity in age, gender and income of those who pledge to projects (see pictures below). Indeed, in the case of crowdfunding, the majority of fundraisers and backers were women. However, at the same time, other evidence - such as from neighbourhood reporting app FixMyStreet - suggests socio-economic and demographic inequality can be high in civic crowdsourcing initiatives, and we still live with a legacy of cities most often planned by men, for men. At the Crowdsourcing the city event, it was encouraging to see at least one aspect of the issue tackled through an all women panel discussing the social impact of crowd urbanism at Crowdsourcing the City.

We need to have more conversations about which communities and groups of people benefit most from crowdsourcing projects and about how to ensure that these benefits are distributed uniformly and at scale. If these processes are not inclusive, they may replicate, or even exacerbate, patterns of privilege and discrimination based on gender, ethnicity, age, disability, location and socioeconomic status.