The Cares Family is a group of community networks of young professionals and older neighbours, who support and socialise with each other 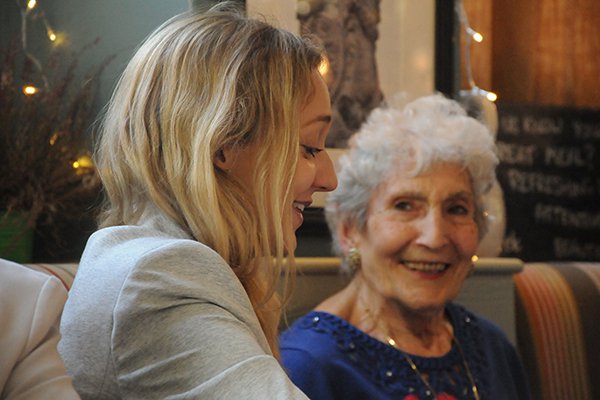 What we are doing

The Cares Family is a group of community networks of young professionals and older neighbours hanging out and helping one another in our rapidly changing cities. The Cares Family exists because, while our big cities are exciting, dynamic places – full of cultural and economic opportunity – they can also be isolating, anonymous and lonely.

The Cares Family’s objectives are to:

A Love Your Neighbour programme matching older neighbours and young professionals to share friendship one-to-one, often in people’s homes. Friends share a chat and a cup of tea, and those who can often visit a local cafe or go to a football match together.

Outreach to help people into the community – by pro-actively identifying and inviting older and younger neighbours who could benefit from new interactions where they are. An annual Winter Wellbeing project, for instance, helps older neighbours to stay warm, active and connected during the most isolating time of year.

Community Fundraising helps neighbours to contribute to their network in additional fresh, involving ways. Older and younger people raise money together through challenges, events, corporate partnerships and by making regular donations to keep all the activities free.

North London Cares and South London Cares began as small community organisations in their home boroughs of Camden and Islington, Southwark and Lambeth. Manchester Cares and Liverpool Cares were built in 2017 and 2018 with the support of Nesta and the National Lottery Community Fund’s Accelerating Ideas programme.

As well as working with over 12,000 older and younger people, The Cares Family is also now having a systemic impact too – helping to shape the government’s loneliness strategy which was launched by the Prime Minister at a special joint North London Cares and South London Cares social club in late 2018.

Although The Cares Family is now a national organisation, the group retains its grassroots approach and values: rooted in place, harnessing the mutual language of people in their communities, listening to older and younger people in real time, and connecting the past to the present to the future by bringing together the changing people and places in big cities.

Now, as we look to the future, the Cares Family are seeking new ways to expand the model into other big cities, to help more people feel part of a rapidly changing world, rather than left behind by it.

What we The Cares Family are learning

In October 2014, North London Cares published a major impact evaluation, which was funded by Esmee Fairbairn Foundation. The research was based on surveys with 150 older neighbours and 150 young professional volunteers in the network, and revealed that:

Yet, as a result of the work of North London Cares:

And of the younger volunteers who participate with North London Cares regularly:

A further evaluation by Renaisi in 2016 found that:

Our ambitions to grow through Accelerating Ideas

The Cares Family has identified that there is a need to expand to other major urban populations in the UK who are experiencing a similar pace of change and conditions which cause isolation, loneliness and disconnection.