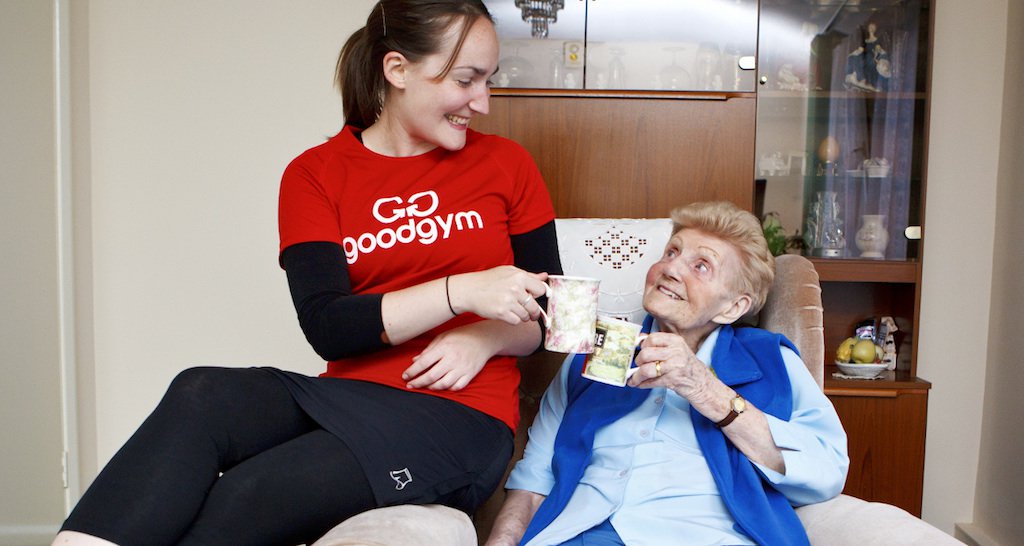 What we are doing

GoodGym is a new way of supporting older people. It is powered by a growing community of runners who work to reduce isolation among older people and bring communities together. GoodGym’s volunteers provide the following support to older people:

GoodGym also organises regular group runs which combine a run with doing manual labour for community organisations. GoodGym is already rapidly scaling, in particular its group runs, and is on track to double in size for the third year in a row, operating in 24 areas across the UK, with 3,500 mobilised volunteers (runners) reaching 700 older people.

GoodGym’s work with older people is at an earlier stage, but the evidence of impact is powerful; isolation and loneliness are effectively reduced and participants' well-being is increased over a six month period. GoodGym are committed to growing their work with, and impact on, older people in the communities in which they work. Furthermore, GoodGym has demonstrated increasing sustainable revenue.

What we are learning

GoodGyms’ Centre for Social Action Innovation Fund evaluation, conducted by Ecorys found that: Coaches (older beneficiaries) interviewed reported positive outcomes related to their emotional isolation. They appreciate someone who listens to them and gives them the ability to speak about emotional topics. This was also the case where coaches had carers, family members, friends, neighbours, other volunteers or a combination of these visit them on a regular or irregular basis.

Rather than the quantity of social contacts, the depth and quality of the interaction with their runner is the key to achieving positive outcomes. All coaches felt happier, and 98 per cent considered their runner a friend. On a scale of 1-5, the average scores for social isolation improved from 2.44 at the baseline stage to 2.74 at follow-up, while the average scores for frequency of feeling lonely improved positively from 2.11 to 2.58.

More individuals scored their life satisfaction as high (7-8 points) or very high (9-10 points) after six months of seeing a GoodGym runner (eight in total at the follow-up stage compared to four at the baseline stage). Average life satisfaction scores changed from 4.78 at the baseline stage to 6.11 at follow-up. The longitudinal survey found that the majority (57 per cent) of people would not have joined another running club instead of GoodGym. It also found that the average number of days spent running among the participants was 9.5 days per month at six months after joining (an increase of 0.7 days).

Our ambitions to grow through Accelerating Ideas

GoodGym aims to expand to 100 areas across the UK within the next three years. This will increase our reach, growing from around 1,500 members to having over 45,000 runners supporting older people with weekly visits and help with household tasks.

The scaling plan is based on four objectives: