The background to our work on the future of personal data collection and its transformative potential for healthcare.

At a workshop at Nesta in March 2014 we examined the future of personal data collection and its transformative potential for healthcare.

At the workshop we created six future health data sharing systems, each accompanied by a new wearable technology, and asked participants to try them out in teams. Each team was asked to explore the health data system they had been given using the short narrative and prototype, with some groups heading out in to the City streets to immerse themselves in the experience.

The teams then modified the prototypes: one team decided to miniaturise the InnerSense implant to make it more palatable; another removed the visible badges from the MediHex, turning it into a discrete bracelet instead. The group given the PharmaPro patch, which gives people rare diseases to increase the value of their data, was horrified by the idea. Members of the group pitched a tool that would screen for implanted diseases, blocking data coming from people who used this system.

However, it was less the physical design of the wearables that was important in the exercise and more the lens we asked participants to look through. We asked them to explore codes of conduct, trust, provenance, behaviours, feedback loops and accountability, amongst other issues. 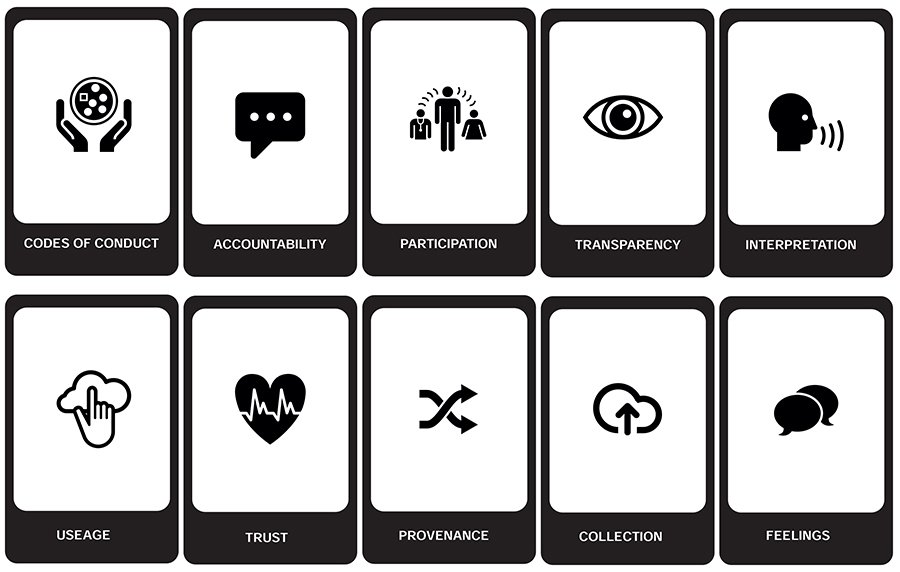 Participants had a selection of cards to encourage them to talk about particular issues or themes.

Walking around with the prototypes left many participants wanting more return on their data. This was not a desire for financial return, but for feedback on clinical research using their data or what the data said about their lifestyle compared with others.

There was a lot of discussion about the value of contextual information - where were you when your heart beat went up? How did you feel, and how much had you drunk? But the more context given, the more personal the data is. The pay-off between privacy and the value of data will continue to shape the debate about personal information management.