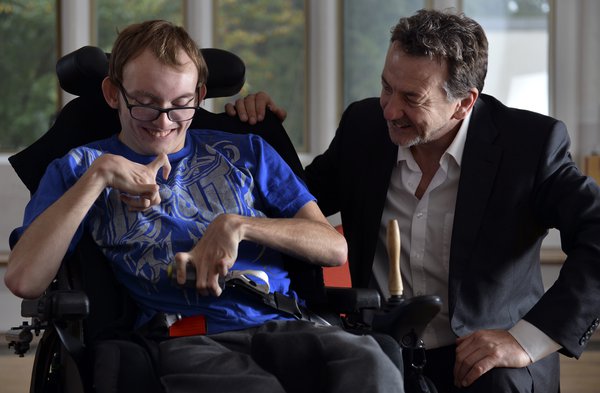 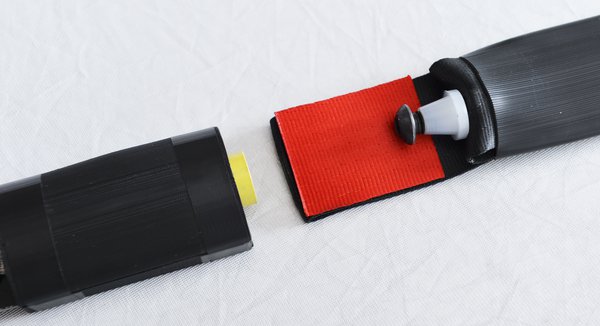 HandyClix uses a magnetic belt buckle with an easily graspable release strap. Its memory-shaped static arm is moulded to the user’s waist, allowing the flexible belt to be attached using only one hand. The velcro stowage bands on the wheelchair arms allow the belt to be stored and held in place when not in use.

The original idea for HandyClix came from Mary Burton, a physiotherapist working at National Star.

Frustrated by the reduction of independence she saw for wheelchair users as a result of traditional lap belts requiring two hands to attach, she began a search for a one-handed belt. When this search proved fruitless, first in the UK and then worldwide, the idea for a totally unique new type of product began to evolve at National Star.

“Some wheelchair users have the use of only one hand and rely on third party support to attach their lap belts after they have transferred from their chairs, usually from bed to chair, toilet to chair, or from wheelchair to seat,” explains National Star Director, David Finch. “This can be both intrusive and impersonal, promoting dependency and requiring additional support from a carer.”

Wheelchair users at the college were complaining of regular trips to wheelchair services to repair belts that had slipped into their wheels, becoming broken and dirty. They recounted times that their existing belts had become caught under them when transferring into their chairs, and voiced frustrations at always having to have someone there when they transfer for this reason.

This was creating a debilitating reliance of wheelchair users on otherwise needless support, so the team incorporated solutions to such problems into the Handyclix product development.

To achieve the right design and manufacturing process, the product has had lots of testing with users with a variety of different levels of hand function, from tremors, to lack of dexterity, to uncoordinated motor control.

One user explains their experience of the product: “It’s just the fact that you don’t have to rely on someone else all the time. It’s just a freedom.”

All of the NHS wheelchair service departments that HandyClix spoke to expressed an interest in lap belt, which will launch with an exhibition stand at NAIDEX - a trade fair for technological innovations in healthcare - in April 2016.