For 15 years, thousands of volunteers have used the online platform OpenStreetMap (OSM) to create an open map of the world. Volunteers help build OSM by adding manually captured data, reviewing open public data (such as satellite images) and annotating features like roads, highways and bridges using the platform.

Despite the popularity of OSM, many areas remain unmapped, unvalidated or incorrectly labelled. This is mostly because crowd annotation of maps is time- and labour-intensive for remote volunteers and finding an equivalent number of real-life validators is difficult. Maps are not static – particularly in vulnerable regions affected by conflict and environmental crises – so they may require remapping if an area experiences rapid changes in infrastructure. These areas need constant monitoring, which is difficult to achieve manually.

The Humanitarian OpenStreetMap Team (HOT) is a dedicated volunteer community that uses the platform to support responses to crises, such as urban floods and migration, by mapping vulnerable regions. In 2018, HOT launched the MapWithAI initiative (in partnership with Facebook) to support the mapping efforts of volunteers using artificial intelligence (AI).

MapWithAI uses computer vision to detect roads and terrain features of the streets on high-resolution satellite imagery. Trained using years of volunteer-labelled satellite data, complex patterns in images are identified by an algorithm known as a deep neural network segmentation model. This model estimates the probability that each pixel is part of a road, predicts and draws potential roads, and generates an enhanced image for the volunteer community through an editing tool called RapiD. Using RapiD, volunteers verify the AI generated roads, helping to identify errors in the model and contribute to its improvement.

The project initially focused on the response to flooding in Kerala, India, but has since been integrated into the HOT volunteer-management platform for deployment on other projects. Project managers and volunteers can opt-in to use the tool or continue mapping without it. 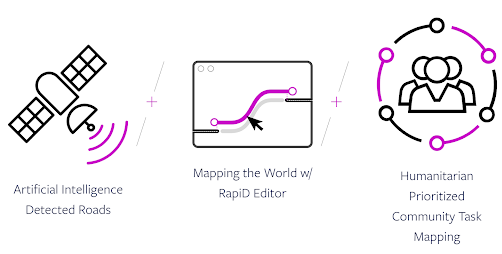 The new tool helps the OSM community to prioritise mapping efforts and respond more efficiently. Volunteers are still vital to the effort, as the algorithm makes common mistakes that can only be identified by human judgement. Witnessing the changes to conflict-affected regions is another uniquely human role, carried out by volunteers. These acts of ‘data witnessing’ help to raise awareness for social justice and drive humanitarian action. The combination of AI with crowdmapping has already led to impressive results. In Kerala, 21,500 roads were added to the map using the tool. A project in Thailand used the tool to catalogue more than 300,000 miles of roads in only 18 months, which may have taken another three to five years to achieve through ‘traditional’ mapping. Since December 2019, MapWithAI has generated maps for almost every country.[3]