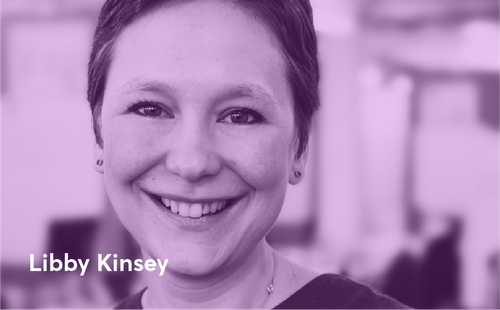 We often talk about getting women into tech – encouraging young women to take up STEM subjects, to pursue them at undergraduate and postgraduate level, to support each other in the workplace.

But that doesn’t mean it’s always easy once you’re there, which Libby Kinsey would be the first to tell you.

Libby is an artificial intelligence (AI) expert at Digital Catapult, an organisation that seeks to accelerate the adoption of AI by industry and grow the UK’s machine learning ecosystem. She refers to herself as a “technology business generalist”, combining a background in maths, technical interest and a passion for business after working in venture capital.

Libby spent ten years working for Nesta as an investor in UK technology start-ups. Then in 2012, a pivotal year for the emergence of modern AI, decided to place a long-term personal bet on this nascent field. In 2014 Libby graduated in Machine Learning from UCL. She describes herself as “fearful” at the start of her career change, but meeting an older woman at a Women in Data meetup gave her the confidence to decide it was something she could do.

Her qualification has led to more opportunities – she’s since worked as a consultant and director on a wide range of projects – but has also led to frustrations.

Many women in tech or science will be familiar with the story – often the most knowledgeable person in a room, simultaneously the one most ignored.

Mid-career changes are not always easy, either. The woman Libby spoke to at the meet-up changed careers in her 50s, and was told by several employers that she “wasn’t a good cultural fit” in companies with young male employees. Libby herself ended up consulting after her own change in direction.

AI is a “very exciting and interesting space to contribute to”, Libby says. But she worries that women are feeling the same “internal barrier” that she was, on the brink of applying to her masters – the little internal voice that says “I’m not the right person”. The field can also be intimidating; competitive, big stakes work. Giving women the confidence to combat that negative internal voice is key. The pay-off isn’t limited to work opportunities: “Doing the masters, and switching career more generally, has been such an enriching experience. I’ve made new friends, taken the time to think deeply and to develop new skills, challenged myself and overcome those challenges.”

As many people have pointed out, products designed by all male-teams have features and biases built into their systems. Libby points to the Apple Health app, which caused controversy when it didn’t include period tracking – this may not have happened if more women had been involved along the way. And that’s without going into the personal opportunities women are missing out on when they don’t pursue cutting-edge work.

So what needs to change?

An image overhaul for computing would be a start, Libby says – “cool girls sometimes aren’t interested in computer science”. We need to support those women who simply don’t currently have a voice. And showing women, from early on, that their presence in technology isn’t simply tokenism – that these voices are vital to the future of the field.