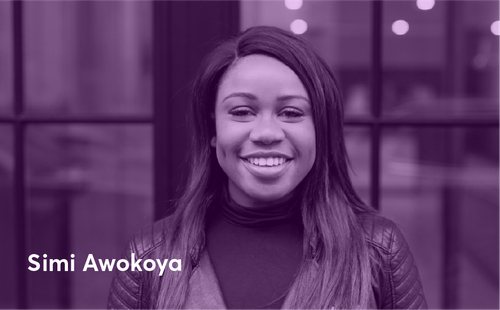 Simi Awokoya is a technical evangelist. Working across a range of industries, Simi works with Technology companies to build Artificial Intelligence (AI) software. She is also the founder of Witty Careers, a non-profit aimed at getting women from minority backgrounds into Tech.

Simi’s passion and talent for science was clear from an early age – she cites her “problem-solving mindset” as an early catalyst for her interest in the area. She took science A-Levels and studied Electrical Engineering at Imperial College, London, a degree she says was “problem-solving and solutions focused”.

It was interesting but Simi saw the need for code in many applications of what she was studying. So, in her third year of university, she secured herself a coding internship in investment banking – and eventually went on to work as a developer following graduation.

Five years in and Simi decided to take up a new challenge of working in Tech across different industries. It was this desire that led her to her current job. Something she finds particularly exciting about AI: “it’s so applicable to so many different industries”.

It’s the “everyday” that inspires her work. “I’m helped by tech on a daily basis – I have loads of apps on my phone that help me. I wanted to understand and work in this space more.”

“Tech is a great outlet to be innovative.”

But there are barriers. People are scared of AI and not embracing it, Simi believes, partly down to negative press coverage of the area, even though the ‘dangers’ that AI presents can be overcome by considering ethics and best practices.

Another misconception is that “tech isn’t for girls”. This starts on Day One; boys are given lego and computer games that build problem-solving and spatial awareness skills, whilst girls are given dolls. Later in life, this feeds into subject choice at GCSE and A-Level – if you’ve grown up without developing problem-solving skills, then you might not be naturally inclined to pick STEM subjects.

This problem was the catalyst for Simi to found her non-profit, Witty Careers. While there are few women in tech, there are even fewer Black and Minority-Ethnic (BME) women. Her mission is to equip BME women in the UK with skills to build a successful tech career, holding events and workshops in Tech companies and broadening women’s professional networks.

“Young girls need to see what a career in tech can look like. Your options are limitless.”

“You can’t be who you can’t see” – and there’s a profound lack of visible role models for women. “It should be completely normal for women to be here,” she says. “More female leaders need to help others up the career ladder.”

The most influential people in tech dictate how tech progresses. And if there’s “no one up there who looks like you, you will subconsciously think you don’t belong there.”

But it’s about more than visibility – Simi is a fierce advocate for better education. “We need more activities in schools, better training, equipping of school leaders,” she says. If she had a magic wand, she says, she’d introduce a careers programme, a whole timetabled subject in schools, that helped people work out what they might like to do after completing education. “We need visibility from ages five or six about what adults do.”

“Young girls need to see what a career in tech can look like,” she says. “Your options are limitless.”