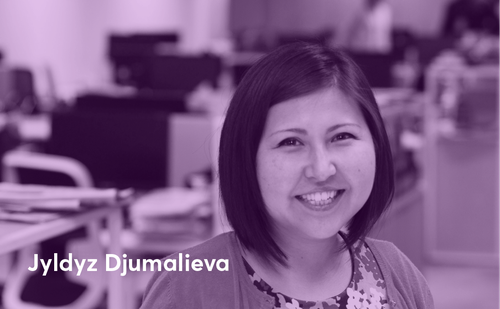 There’s a common refrain from those who want careers in tech but don’t feel qualified: “but I don’t have a background in maths or science!”

In reality, this doesn’t have to be a bar to entry at all – and Jyldyz Djumalieva is a perfect example of it, having travelled a more circuitous route into the field.

Jyl’s undergraduate degree was in business administration and her career followed suit. Early in her career, she worked on marketing campaigns for global brands like Pepsi, later gaining a Masters degree in organisational psychology. She now works at Nesta as a Data Science Research Fellow in the Creative Economy & Data Analytics team, using machine learning and big data to make sense of jobs and skills.

“The toys and tools you play with when you’re young have such a big impact on who you think you can be, or who you might become”

But it was an interest in organisational change that led her to programming. While working on a consulting project, Jyl became aware of the potential impact of social networks on adoption of change in an organisation. Fascinated by the wider applications of network analysis, Jyl realised that by learning to code she could use open source tools to aid her work. To build on existing skills she already had, she decided to take on another MA in big data analytics.

“If you learn to use these tools, you can ask the most interesting questions,” she says.

Hers is an interesting journey: she went into AI, not because of a long-standing passion for data science but because she realised it would allow her to ask big questions, in the most efficient way. In fact, as a child, she “didn’t play video games or interact with technology” – but she now believes that these early experiences are key to encouraging people into the field.

“The toys and tools you play with when you’re young have such a big impact on who you think you can be, or who you might become,” she says. Code should not be taught as something that is a “magic tool”, she says, but as a “problem-solver” – “there’s no mystery around it: you can just use it to solve the problems that you see”.

"Women are more likely to underestimate themselves – they don’t go for opportunities because they don’t imagine themselves as being able to be successful.”

The image of computer science and maths could also do with a bit of rebranding. “I didn’t appreciate maths enough when I was younger,” Jyl says. “It was presented as difficult and mysterious, and not that interesting. I didn’t know you could use it to answer such interesting questions.” It was her passion for her early projects that was instrumental in maintaining motivation, even in the face of initially lacking coding or advanced math skills.

These early decisions about what to study are not superficial, either. “Women are discouraged from learning physics, maths and economics early and then don’t move into those fields,” she says. “These subjects are regarded as difficult, and women are more likely to underestimate themselves – they don’t go for opportunities because they don’t imagine themselves as being able to be successful.”

Jyl believes that women need to know what a data scientist actually does so that they can see that it’s a job they can be good at. They also need more support at the early stages, especially if they are changing careers – “we need guidance on where to start, for example, resources and training.”

“We need to show girls that tech is a career that allows you to ask really interesting questions,” she says. “You can help people, you can use these systems to have an impact on people’s health, on their decision making.”

“This is a really fun job!”

To find out more about Jyl follow her on Twitter @d_jyldyz or view some of her work at Nesta.