The professor who combined her passion for linguistics with AI

The professor who combined her passion for linguistics with AI 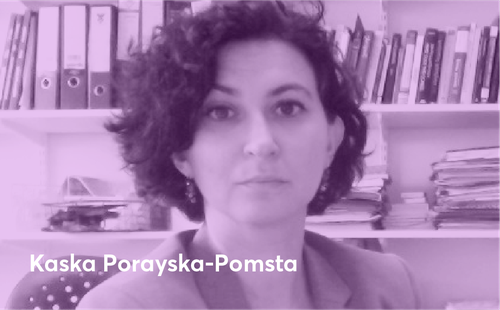 Associate Professor and Head of Research, Department of Culture, Communication and Media at UCL Institute of Education

When Dr Kaska Porayska-Pomsta was growing up, she thought she’d be a poet. But after she started studying linguistics at the University of Edinburgh, she realised she wasn’t satisfied by studying linguistics by itself – so she embarked on a joint degree with AI instead.

This was a pivotal moment in her career. Retaining her passion for social science, Kaska was still able to look at human communication and learning, emotions and motivations – but all through the lens of AI.

Edinburgh’s degree structure was important here: in your first and second year you can pick and choose from a huge variety of modules. AI was a “steep learning curve” for her, but the discipline had so much intellectual mileage that it gave her the chance to dive into many different questions. “It didn’t remove the creative aspect of research for me,” she says.

This interdisciplinary background has served her well: she now works at the UCL Knowledge Lab, researching the use and design of technology for education. Her work is important: Kaska says the “pragmatics of learning are often treated as an add on, but research increasingly shows that the emotional aspects of it should be primary.”

“The problem isn’t with AI itself but with the social constructs that get put into it.”

She describes AI as a “multidimensional tool – applied philosophy”. AI modelling works as a methodology more than anything, she says, helping you define your questions more precisely; the “physical manifestation of theories”.

Like many women in the field, Kaska says the barriers she’s faced have been internal, not external. “For me, the barriers were much more social than intellectual,” she says. “For a woman, perceiving yourself as an engineer or a physicist takes a lot of confidence”.

And the “algorithmic bias” that results from a gender imbalance is a big issue. “The data we produce is inherently skewed against women and ethnic minorities,” she says. “The problem is that white men rule [the industry] – influencing what kind of AI is being created.”

“The problem isn’t with AI itself but with the social constructs that get put into it.”

“The reality of AI is much more fascinating than frightening.”

As for encouraging young women into tech? Kaska believes that “looking at young people’s passions” is the vital entry point.

“There are so many different uses and types of AI but people don’t realise that what they want to achieved could be done through it.”

We should be asking young people one important question, Kaska says: what gets them up in the morning? “Then point them to the ways in which you can reach those girls through a STEM, tech or AI lens – inspiring them through the questions that are already inside them.”

This is key – Kaska believes we’re “miseducated about what AI actually is,” and is keen to get into schools to talk to young people about AI.

“People need to not be scared of it,” she says. “The reality of AI is much more fascinating than frightening.”